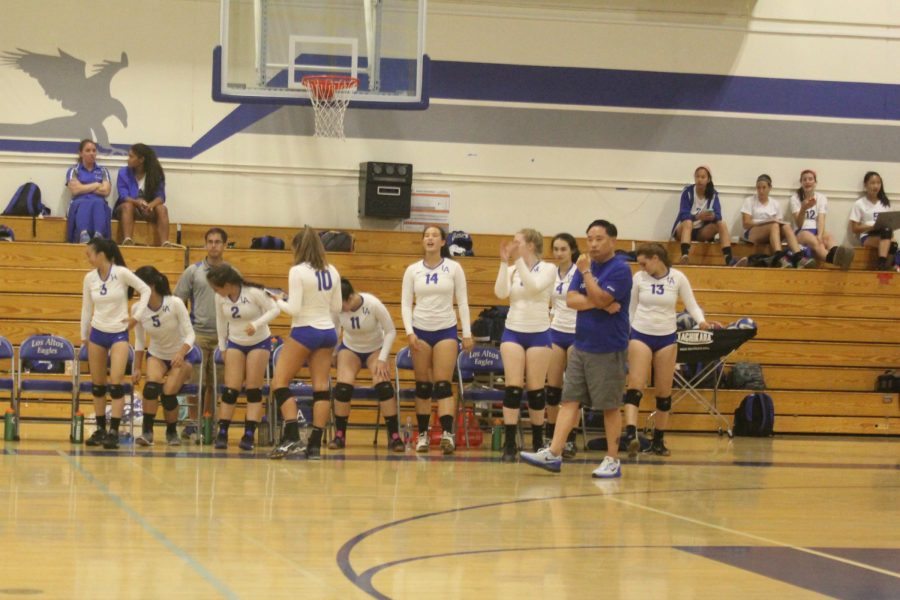 “What time is it? Gametime!” This cheer can be heard echoing throughout the gym prior to every varsity girls volleyball game. And from the end of this cheer to the end of the match, one can periodically hear chants of “Access denied!” and “Back that ace up!” as the team, both on the court and on the bench, celebrates each small victory over the course of the game.

There were many of those small victories for the Los Altos team today, September 13, which together added up to winning their first league match of the season against Mountain View. Los Altos won decisively, 3-1, dropping only the second game en route to their victory. The entire team performed well in the victory, with many key players stepping up in the rivalry matchup.

“[It] was such a team effort,” senior hitter Lauren Limbach said. “[Senior setter and co-captain Kate Carlson] did great on the setting, [senior Avery Deaton] was awesome as Libero [and] our outsides killed it.”

Lauren herself also played a large part in the Eagles win, with seven kills on an 87.5 percent kill success rate. Outsides junior Hanadi Nassif and co-captain senior Katherine Mumm also contributed offensively, with 13 and nine kills respectively. Setting up most of these kills was Kate, with all 37 of the team’s assists.

As this was both the first game of the league season and the all-important rivalry matchup with Mountain View, today’s game was a very important and emotional win for the team. The Blue Crew also turned out for the game, allowing the team to feed off of their energy and support and take advantage of momentum swings.

“We were able to use our nervous energy in a positive way instead of being frantic, and I think having Blue Crew there helped us harness that,” Kate said. “Los Altos has always been known for being the loudest team in terms of noise level and… having good audience turnout could help us win a league championship again.”

The first three games were very competitive, with Los Altos winning 25-23, losing 22-25 and winning 25-20 in very intense fashion. The third game in particular was a fierce battle, with Los Altos trailing Mountain View by a few points throughout most of the game. However Los Altos finished the game on an eight-point run led by junior Aevia Trainor’s excellent serving to take the lead in games 2-1.

The team will hope to carry this momentum over into their next match and throughout the rest of the season. As the reigning league champions, pressure is clearly evident, but this key rivalry win is a good start to what could be another successful season.

“I think this was a great confidence booster for us, going in showing that we are the team that we were last year, that we haven’t fallen and that we’re ready to come back and get league for the third time in a row.” Lauren said.