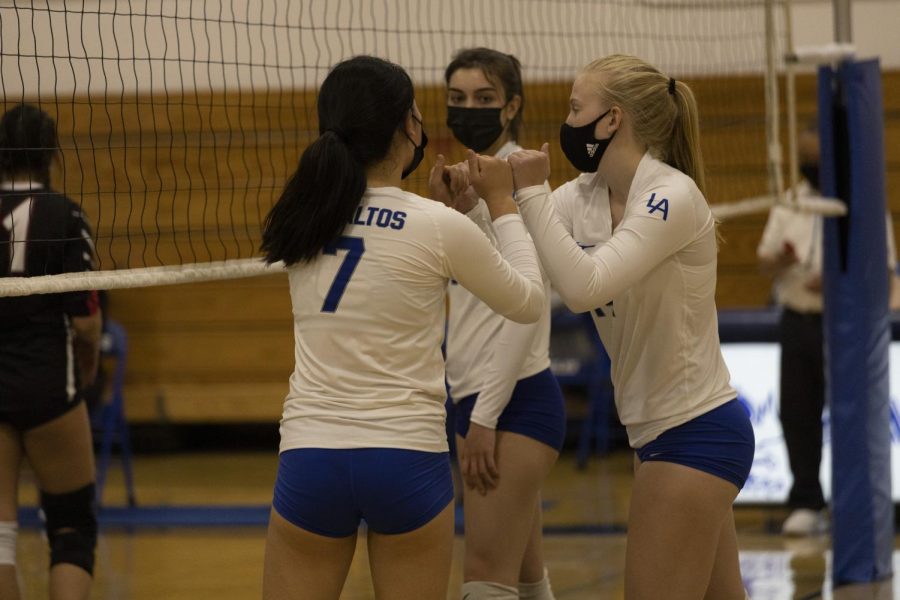 Two Los Altos volleyball players share a forearm bump in celebration during their first match of the 2021 season against Gunn. Despite COVID-19 restrictions, the team has found ways to maintain team spirit.

The air was thick with anticipation — but the stands were completely empty. The masks covering players’ usually shouting mouths exaggerated their narrowed eyes, and the absence of a cheering crowd amplified the rhythmic thump of the ball.

This was the scene inside Los Altos High School’s large gym on Wednesday, March 31, as the varsity girls volleyball team warmed up for their first match of the season against Gunn High School. They defeated the Titans 3-0.

After more than a year without competitions, the team is finally back on the court — with all the necessary safety measures. Only players, coaches and media personnel were allowed inside the gym, and both players and coaches had to test negative for COVID within the 48 hours before the match. Teams didn’t switch sides of the court, the volleyballs were sanitized and players kept their masks on for the duration of the match.

The Eagle’s won their first set 25–20 and continued to beat the Titans by larger margins for the next two sets as the rust of quarantine wore off. The Titans struggled to stay in sight of the Eagles’ lead, pushed back by a series of precise hits and kills from juniors Carolyn Dormady and Emma Symon.

“I remember some of Carolyn and Emma’s swings that hit the ground so fast without any touches, and they just boosted our morale and spirit,” sophomore Kaitlyn Lee said.

The team maintained their lead in the third and final set, winning 25–13. Overall, the Eagles had a solid start to a season hampered with setbacks.

Coming back from their hiatus challenged the team’s dynamic, according to some players.

Carolyn explained that only having a week and a half to practice before competing resulted in a lack of communication on the court, but she added that it will be an easy fix with a little bit of motivation.

“There’s definitely a bit of tension, and it’s going to take a little bit of time to adjust to that,” sophomore Cambria Cook said, referring to the beginning of the first set.

Soon enough, the tense silence present during warm-ups began to ease as players got back into the swing of things. The team was amped up and ready to go. By the second set, the team was moving more fluidly together, and players began cheering their teammates on from the sidelines.

“I was so excited to be back on the court with my school team. It almost felt surreal after playing grass volleyball on the baseball field for the last six months,” Carolyn said.

The prospect of losing out on a season also added to the significance of the moment; this game was an event that many players and coaches didn’t expect to experience this year.

“When I was talking to the team before the match, I was kind of getting emotional, because I didn’t think this was going to happen,” head coach Peter Kim said.

Moving forward, the team hopes to make the best of their season, both by improving their skills and bonding with each other. One of Emma’s goals is to simply be there for her teammates.

“I’m really trying to work, especially with some of the younger players, at being there for them, and setting an example and being sort of a role model,” Emma said.

Although Kim has goals for the team to push themselves and get better through the season, he also hopes his players will simply be “playing as hard as [they] can and having as much fun as possible.”