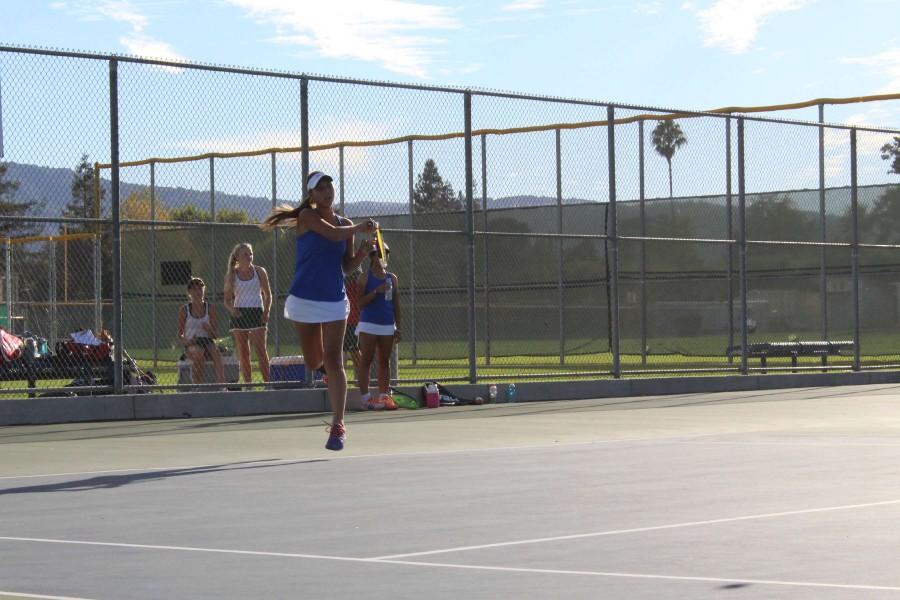 On Thursday, September 24, the varsity girls tennis team beat Palo Alto High School 4-3 in a head to head match, gaining their first league win with a record of 1-3.

Palo Alto had only moved back up into the De Anza league this year after spending one year in the El Camino league, and both teams fought hard to recover from 0-3 starts in the league. With a strong singles lineup, the Eagles were just able to pull out ahead.

“We didn’t play the best, and the doubles are still improving,” varsity head coach Hung Nguyen said. “The singles pulled through. Every team is tough in this league, so there’s no walkover.”

While the varsity one, two and four singles teams defeated their opponents in decisive 2-0 matches, the doubles teams did not fare as well, with two of the three teams splitting sets on 1-2 matches, and one team losing 0-2. The varsity doubles one team of sophomore Aline Wu and freshman Karina Shah-Chavez split the first to sets of their match 1-1 before losing the third 2-6.

With an even 3-3 score, the deciding match fell on the singles three player, freshman Celeste Tran. With all of the other matchups completed, the entire team gathered to cheer on their last hope for victory, who dispatched her opponent in a marathon three hour, three set match. She won the first set 7-5, dropped the second by the same score and ground out a 6-4 win in the third to give Los Altos the day.

“I’m proud,” Nguyen said. “That was a tough win. I can expect every match to be close, but not that close, I hope… I’m so proud of [Celeste], that she pulled [it] out, even though she’s only a freshman. It was a good win for her.”

The team’s next game is at Lynbrook on Tuesday, September 29, and their next home game is Tuesday, October 13 against Homestead.