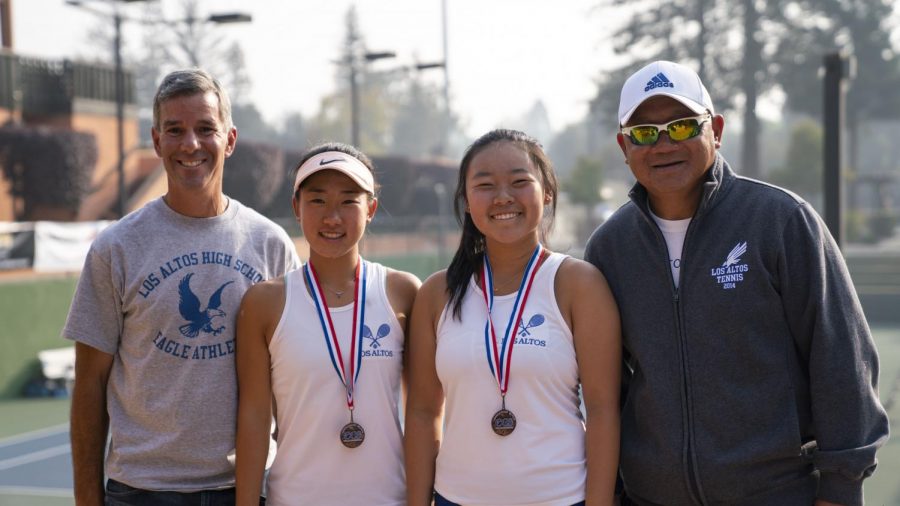 The girls varsity tennis doubles team, sophomore Yuu Ishikawa and junior Kylie Akiyama, finished as CCS semifinalists this past Wednesday, November 14. Their performance marks the first time in three years that a Los Altos team has made it to the girls tennis doubles semifinals. The varsity girls team won one round in CCS against Prospect and lost to Los Gatos with a team score of 1-6.

This season, the girls varsity team advanced to the De Anza Division of SCVAL, the upper division. The new league impacted the performance of the doubles partners, as varsity head coach Hung Nguyen believes the harder competition strengthened the team at large.

“The [mixed] competition actually gave us the chance to improve ten times more than [if we were to] play in the lower league like we did the year before because we can easily get complacent,” Nguyen said.

Both the SCVALs finals and the CCS finals for the doubles teams ended similarly with Los Gatos, Palo Alto, and Los Altos ending up in the final four. Since Los Altos beat Palo Alto at the SCVALs semifinals, the Los Altos doubles team was disappointed to lose to the same Palo Alto team during CCS. However, like many others on the team, Kylie maintains a positive outlook and hopes to translate her performance this year into actions and lessons learned for the future.

“Losing [to Palo Alto] was rough because we knew that we could beat them, [but] we just weren’t playing our best,” Kylie said. “[What I learned from CCS this year was to] just never [give] up and not [lose] hope when you’re down in sets down in games and points.”

Both Kylie and Yuu played singles positions for the majority of the season, and they only paired up as a doubles team for one league game before playing in SCVAL league finals and CCS. The doubles partners’ few practices together make their success in CCS impressive, says Nguyen. He credits their success in CCS to their individual skills and previous experience playing doubles.

“Yuu … plays a lot of doubles tournaments all year long with different teammates, so [she] has a lot of experience in doubles,” Nguyen said. “And Kylie is…one of my best doubles players, and…she’s used to adapting to whoever her partner is…They’re my two best doubles players on the team. They both have a lot of experience, and they both can play with different partners at any given time. That’s why they made it that far.”

The doubles partners are hoping to improve the practice frequency of the team next year, organizing team practices during the summer to prepare for the next fall season. Both girls wish the best for next year’s team.

“For the team, if we can make it to anywhere near [semifinals] in the team CCS, it [would] be super cool,” Yuu said. “Hopefully, [finishing as semifinalists is] a motivator for next season to try and do even better.”