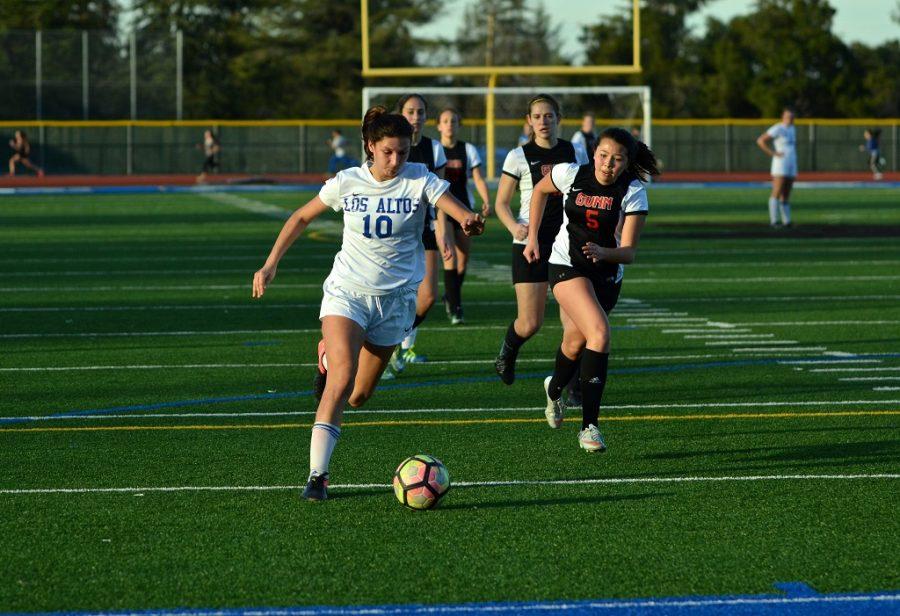 On Tuesday, February 14, the girls varsity soccer team celebrated Valentine’s Day and their senior night with a 3-0 win over El Camino league rival Gunn High School. With their only loss in league play this season coming from their first matchup with Gunn, this win placed the Eagles in first place for their division and brings them one win closer to securing division championships.

“We knew what we were expecting,” head coach Eric Madrigal said. “We fixed a few things that we thought we could have done better in our first game [against Gunn]. We recognized those [improvements], we practiced them, the girls implemented them and we won the game.”

Los Altos established their lead early into the first half with senior Hannah Wendelken scoring the first goal for the Eagles just minutes after the whistle blew. Hannah later continued to play aggressively, sending a long pass to senior Jaclyn Saik, who attempted to take another shot at the Titans’ goal but was stopped by the goalie.

Shortly after Jaclyn’s shot, she collided with a Gunn defender and fell to the ground. Injuring her ankle. Jaclyn was helped off the field and could not play for the rest of the game. This didn’t stop the Eagles’ offense, however, as they continued to battle Gunn for possession of the ball for the rest of the half.

Gunn attempted to tie Los Altos with a free kick from midfield. However, this kick was easily caught by goalie junior Sophia Smith. Minutes later, Gunn continued to attack with a corner kick, but the shot went too far past the Eagles’ goal and was quickly removed by the Eagles’ defense.

As the first half wound down, Los Altos fought for one last drive against Gunn. Senior Stephanie Campos delivered a cross to Hannah, who overshot the ball past the goal post. In a confusing turn of events just before the end of the half, Hannah took one final shot at Gunn’s goal. While fending off a mob of Gunn’s defenders, the ball ricocheted off one of the defenders and rolled into the goal just seconds before the whistle blew, signalling the end of the first half.

Los Altos went into the second half with a comfortable 2-0 lead but sought to finish off Gunn by to expanding their lead. One of the first drives was lead by junior Nika Darvish’s shot, which deflected off the goalkeeper. Senior Megan Woolley tried to follow Nika’s shot but was thwarted by one of Gunn’s defenders. Senior Quinne Woolley later sent a long cross deep to the far post but that ball was retrieved by Gunn’s goalkeeper before any of the Eagles could reach it.

Gunn eventually gained possession and attempted, once again, to score on the Eagles off of a long distance free kick. As the ball lifted into the air and seemed to almost float into the back of the Eagles’ goal, Sophia jumped and caught the ball midair.

Los Altos continued to apply pressure, and after a few offside calls, had a breakthrough when Quinne sent a cross to Hannah, who shot the ball across the goalkeeper and into the Titans’ goal. This goal gave Hannah a hat trick for today’s game.

“She’s invaluable,” Madrigal said. “The teammates know it, the coach knows it, everybody knows that she’s a very key part of our formation and our team.”

However, Los Altos’ aggressive play landed them into a bit of trouble towards the final minutes of the game, as senior Krissy Ikeda collapsed onto a dribbling Gunn forward and was issued a yellow card. One of the Titans’ forwards took a penalty kick and aimed it for the lower right corner of the goal but Sophia dove for the ball and saved the Eagles from giving up a goal to Gunn.

The game ended with the Eagles emerging victorious and shutting out the Titans in one of the most crucial games of the season. This game meant a lot to the players as part of the legacy for the departing seniors and a chance at CCS for the team.

“It means a lot for us,” Nika said. “We worked really hard this season and we’ve been winning most of our games and this game basically was deciding if we would advance to CCS. This kind of validates that we’ve been working hard and our hard work has been paying off and that we’re moving up to the next level.”

The Eagles next opponent is Monta Vista High School and they will be playing on the Matadors’ home field Thursday, February 16.