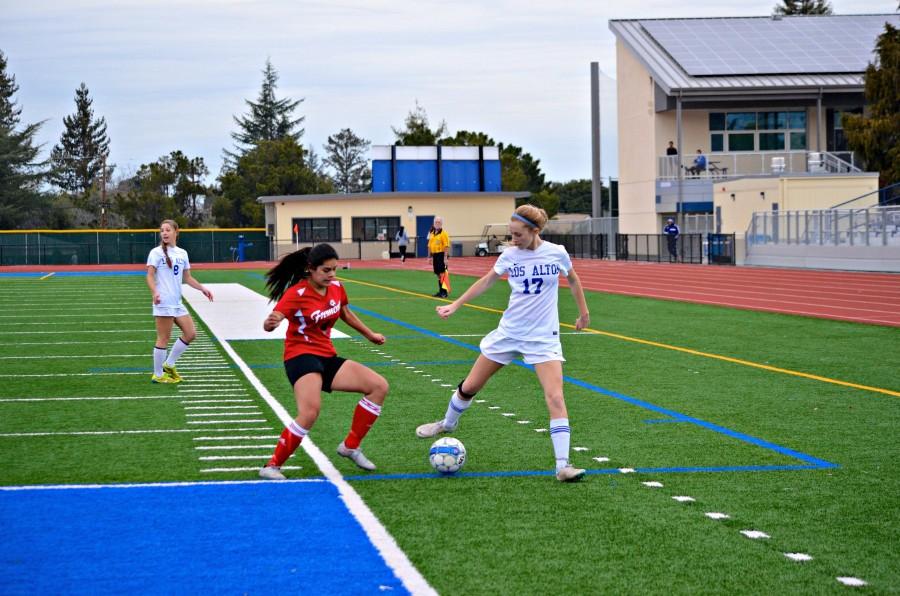 Senior Stephanie Kouvelas dribbles the ball near a defender. Photo by Kunal Pandit.

The girls soccer team lost 2-1 at home to Fremont yesterday, Wednesday, February 3, as they were unable to take advantage of their opportunities and Fremont’s ability to capitalize on brief lapses in the Los Altos defense. Coming into the game, Los Altos had hoped to upset Fremont, who are currently first in the league table, but was unable to generate many clear chances going forward past Fremont’s stout defense.

The game started off slow for both teams, as chances for either team were few and far between for most of the first half. Fremont saw more of the ball and maintained slightly more possession, but neither team was able to work the ball up the field very effectively. Both defenses stayed solid and cleared any prospective attacks.

The Eagles were able to generate some pressure, especially when the central defenders were able to push up and get involved in the offense, but did not have any clear chances. Early crosses and long through balls got the ball in threatening areas for the Eagles, but they never quite found the end product.

“I think if we were to pinpoint [the loss] on anything, it would be not finishing our chances when we had the opportunities to,” junior defender Emily Pye said. “We had a lot more quality chances than them, but when it came down to it we didn’t finish.”

The first goal of the game came just before half in the 38th minute, as the ball was haphazardly cleared out of the Los Altos penalty box, only going as far as senior Tess Wendelken just outside the box. Fremont freshman Amanda Hiebert stole the ball, and took a beautiful strike from 20 yards out, arcing over the outstretched arms of the Los Altos goalie and into the back of the net. The score stayed 1-0 to Fremont heading into halftime, with Amanda’s great strike the only thing separating the two teams.

The game continued in much the same fashion after the break, with neither team able to find many open chances. Los Altos was able to produce some half-chances on the offensive end led by forward senior Stephanie Kouvelas and freshman Laura Galceran. Both caused problems all game for the Fremont defense with their individual skills and dribbling, but still could not find a successful end product.

Disaster struck in the 65th minute for the Los Altos defense, as the ball bounced in the box, and was eventually deflected into the net off a Los Altos player, giving Fremont a 2-0 lead with only 15 minutes left to play.

Los Altos committed more to the attack, attempting to salvage something from the game, and began to seem threatening each time they saw the ball, with chances coming closer to the goal. With less than five minutes left to play in regular time, the Fremont goalie was yellow-carded for delaying the game after a missed shot by Los Altos, and had to leave the field due to high school rules. Los Altos quickly capitalized with their first goal of the game, as Laura flicked the ball over a defender to Emily, who blasted it past the replacement goalie and into the back of the net.

Unfortunately Emily was also injured on the play, and had to be removed from the game with pain in her calf and ankle. In the final minutes Los Altos continued to press, but was unable to find a tying goal, and the game ended 2-1 in Fremont’s favor.

This loss brought the Eagle’s record to 4-4 in league play, and they will be looking to rebound from this loss with a win in their next game, this Friday, February 5, at Lynbrook, who are currently sitting just ahead of Los Altos in the league table. Emily plans to return in time for this game, as her injury appears to be just heavy bruising to the ankle. Looking forward to this game, the team will need to work on finishing opportunities, while also keep their own style of patient, possessive play in mind.

[Finishing is] definitely been a recurring problem that we have been working on it practice,” Emily said. “But we also put a big emphasis on our style of play and how we can improve the way we work together. Every practice we are striving for cohesion and to further develop the possession based style of play.”