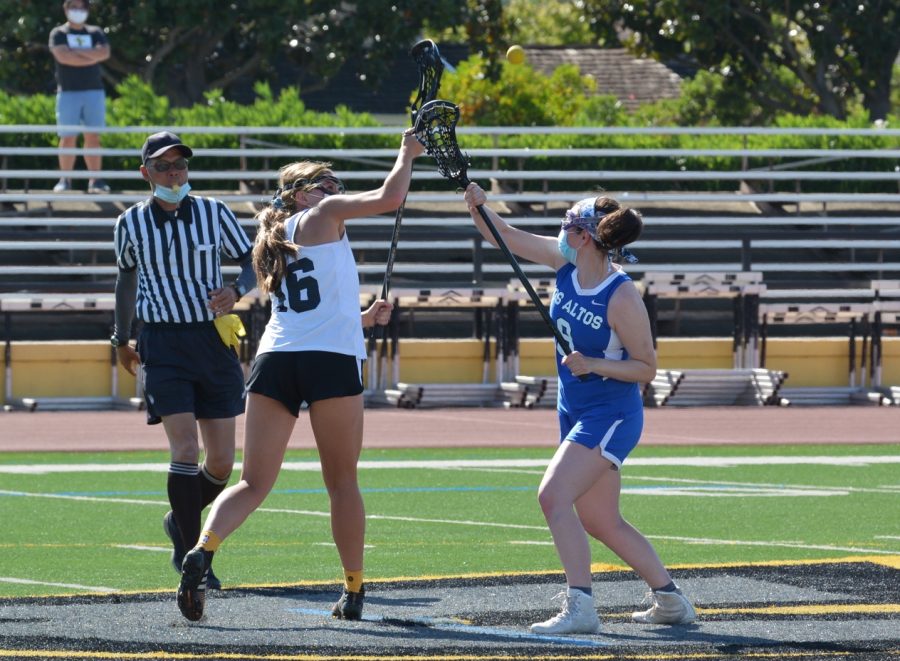 Senior Megan Quinn fights for the ball against Mountain View opponent. The rival teams went head to head for the first time this year on Mountain View territory, resulting in a loss of 14–1.

Varsity girls lacrosse played their first rivalry game of the season on Wednesday, May 12, at Mountain View High School, resulting in a loss of 14–1. The teams chanted in huddles louder than ever ahead of the biannual rival game.

Despite the established school rivalry, athletes from opposite teams were frequently chatting in between plays, remaining friendly throughout the game and getting to know other players holding the same positions.

The teams were scheduled to play one another earlier this season at Los Altos High School, but when the athletes showed up to the field for that home game, the ground lines were not yet painted onto the field. Due to this lack of communication within administration, the game was canceled, and the rival teams played each other for the first time on MVHS territory instead.

As the team has faced multiple setbacks with a lack of coaching, upperclassmen players and a designated playing field, the athletes agree that they can only focus on how to be the best version of themselves, with better communication and team connection.

“To improve as a whole, we need to focus on our communication,” junior Diya Gupta said. “This year we didn’t have a [normal] pre-season — the first day that all of us played together as a team was actually a game, so we never really learned to play together before the competition season.”

The competition has been difficult throughout the season, but that is not to say the Eagles haven’t improved, both as individual players and as a team. Throughout the duration of the game the girls improved their offensive skills as they led multiple breakaways, with freshman Abby Camp scoring the Eagle’s first and only goal with four minutes remaining in the game. Defensively, the Eagles blocked numerous shots on goal in the second half.

“We’ve started getting more comfortable playing with one another, and we can definitely see improvement,” Diya said. “Communicating and playing to our teammates’ strengths and weaknesses will go a long way in facilitating a sense of familiarity with our skills for the rest of our season.”