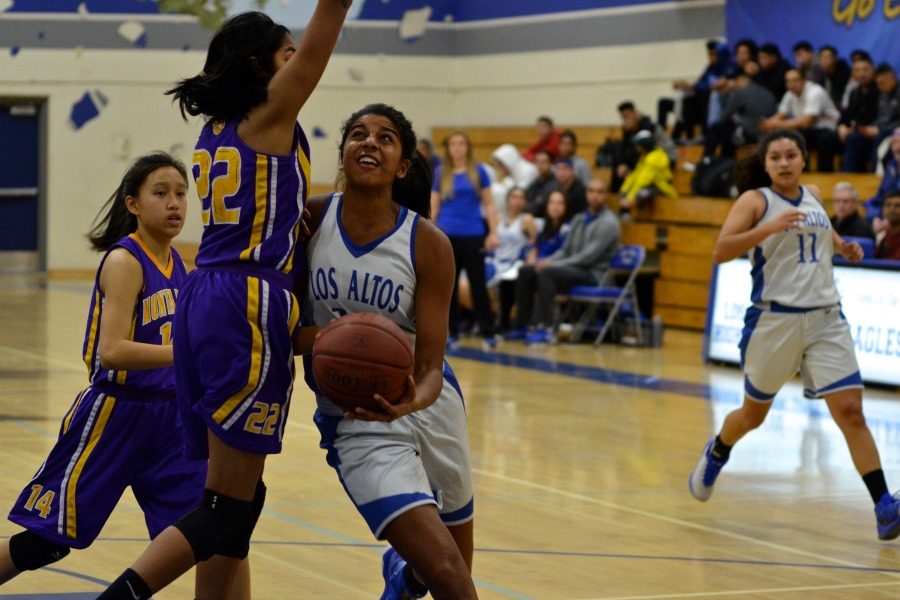 By Michael Sieffert and Yalda Khodadad

After a rough preseason losing many games by single digits, the varsity girls basketball team surged back with a victory against Monta Vista High School on Friday, January 6.

“Getting the first win in league was huge,” head coach Jaclyn Brode said. “Our preseason was a tough preseason, and I feel we left three wins on the board. We’ve talked to the girls about expecting to win and not being satisfied with just playing close games. Beating Monta Vista was something we needed to do to prove we are in the top three of our league.”

To start the game, the Eagles attacked the glass with an aggressive offense, led by senior Alyssa Cortinas who scored a game-leading 12 points. Los Altos displayed quick ball movement and stressed retrieving offensive rebounds. After the first quarter, the Eagles led with a score of 11-3.

In the second quarter, Monta Vista attempted to close on Los Altos’ lead, outscoring the Eagles 8-11. But ambitious to maintain their lead, Alyssa and senior Audrey Jones emphasized teamwork, evident after two years of playing alongside each other, to fuel the offensive attempts. By the end of the first half, Los Altos was ahead with a score of 19-14.

Both teams opened the third quarter by exchanging one scoreless position after another. Los Altos started to gain momentum once Alyssa and sophomore Mahika Gupta started to attack the rim, extending the lead and bringing the score up to 32-18.

In the fourth quarter, Monta Vista outscored Los Altos 17-9, but Los Altos was able to regain their lead through maintaining fast ball movement in order to spot wide open opportunities to score. With two minutes remaining, Alyssa found junior Anjali Nand wide open on the three-point line to make the biggest play of the game. Anjali made the shot and earned a foul as well, and the four-point play sealed the win.

“Anjali’s four-point play was huge,” Jaclyn said. “While we would have liked to move the ball some more, I do tell the girls to fire away anytime they are set, comfortable, and in rhythm from their range. Anjali stayed composed on the catch and showed great focus to get off the shot because the defender was closing out hard. All credit to Anjali for having the toughness to make the big play when we needed it.”

The Eagles beat the Matadors with an overall score of 41-37.

“Our coach said that we started off well and that it was a good game,” Mahika said. “But there were definitely areas where we could have picked it up, made smarter choices and kept up the lead we had in the beginning.”

The varsity girls basketball team play again at Fremont on Wednesday, January 11. The next home game is against Cupertino on Friday, January 13.