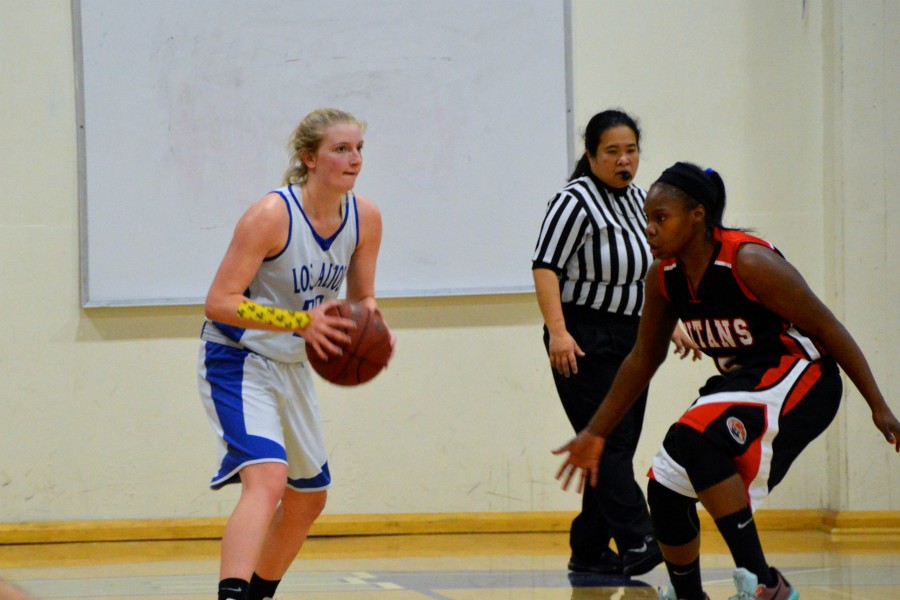 Despite a relentless comeback attempt, the girls basketball team fell to the Gunn Titans by a score of 57-46.

Gunn jumped out to an early lead in the first quarter, but the Eagles were able to stay close behind. With time winding down, senior captain Meg Enthoven contributed with a smooth layup after receiving a full court pass, followed by a steal leading to another two-pointer, cutting the deficit to three points at the end of the quarter.

Junior Alyssa Cortinas started off the second quarter for the eagles with a three, but this initial progress was soon trumped by the Titans’ strength. Despite a clean jump shot by senior Rachel Glein and another three by Alyssa, the Titan’s lead could not be diminished. Multiple missed offensive chances, along with a strong Titan attack led to a 30-12 Gunn lead at halftime.

“As a team, we were overall just slow and not adjusting to their offense and it killed us,” Rachel said said. “We also missed way too many layups.”

The third quarter started off slow, filled with fouls from both the Eagles and the Titans. Rachel countered two free throws from Gunn with four of her own throughout the quarter. Both she and Meg worked hard to make their free throws, but unfortunately, the Titans’ lead grew to 46-28 going into the fourth quarter.

“A strength of this game was definitely not giving up,” Rachel said. “We played hard until the end and I’m really proud of my team for that.”

Senior Meg Enthoven led the Eagles’ comeback bid in the fourth quarter with aggressive play. She started the quarter off with two successful free throws, a break away lay up and her fourth steal in the second half. The momentum of the game shifted, as the Eagles relentlessly fought to come back. With huge contributions from junior captain Audrey Jones, including a three pointer off an assist from senior captain Allegra Maeso, the Eagles looked to turn the tide. However, the Titan lead proved to be too much, and Los Altos could only close the gap to only 11 points. They finished behind the Titans with a score of 57-46.

“In other games that we play, we have really bad third quarters and we let the other teams go on runs,” Meg said. “That has been one of our issues but we dealt really well with that this time. We were down by eighteen and then came back to only be down by eleven.”

The girls’ basketball team’s next game is next Tuesday at Mountain View. Their next home  game is the following Friday against Palo Alto.