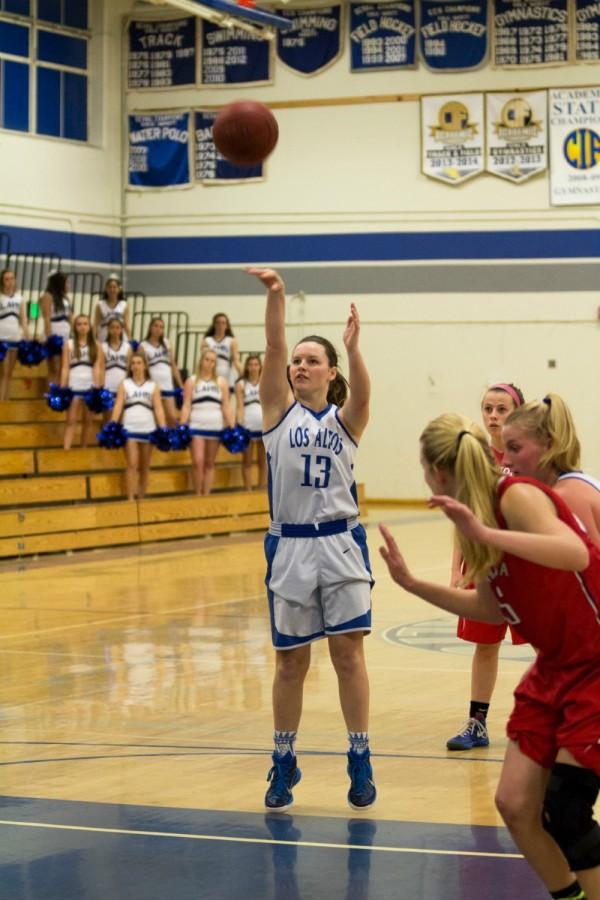 After the varsity girls basketball team was promoted to the De Anza division at the beginning of last year, the Eagles are ready improve their game within the league. Last season ended with a 3-9 record, prompting the Eagles to strive for more wins this year.

“A lot of our games were really close, but we ended up finishing more on the bottom,” co-captain senior Katie Munro said. “Those losses, more than our successes, really shaped us to be more hungry this year for more wins and realize that we weren’t satisfied with where we finished last year. We really want to get to a place where we are happy.”

For the past 12 weeks, the team has been preparing for the season through weight training and early morning practices, giving players a chance to brush up on skills and improve their game play.

“We’ve just been putting in a lot of work,” Katie said. “We do open gyms three times a week. It’s just been a lot of work physically and mentally having to wake up that early. In terms of what we are physically doing, we got a new shooting machine, so we have been shooting non-stop and really working to get as many shots up as much as possible.”

In addition to morning conditioning, evening practices primarily focus on skill development and provide opportunity to scrimmage with each other.
“We come at night [and] we are here for two hours,” Katie said. “We work on shots on the move [and] just shots in general. [We do] dribbling exercises [and] a lot of scrimmaging in the pre-season, as well as running. We do a 30-minute running workout that [Coach Jaclyn Brode] found from the University of Kentucky.”

The team also looks toward the guidance of experienced players, namely Meg Enthoven, Rachel Glein, Allegra Maeso and Katie Munro, the team’s four seniors. Since last year’s team only consisted of two seniors, upperclassmen experience was harder to harness, which in turn led to the team having a more junior-heavy leadership.

“We have a pretty strong group of seniors,” Katie said. “We’ve had the really strong presence and a couple of us were captains last year, so I think that will really carry on into this upcoming year. We have one new freshman, Mahika Gupta, who is really good. I think she’ll really help to drive competition. And since she’s good, she’ll make everyone else want to compete for their spot. And then also it will just motivate everyone.”

Along with upperclassmen leadership, the team will also incorporate lessons picked up from past players.

“I definitely think being more vocal and I think another thing is confidence,” senior Meg Enthoven said. “I think that a lot of our graduating players and seniors especially have a lot more confidence on the court and who they are as a basketball player, whereas some of the other underclassmen don’t. I think that we’ve learned that. I’ve learned that especially. As a player, just to have confidence in myself whenever I have the ball.”