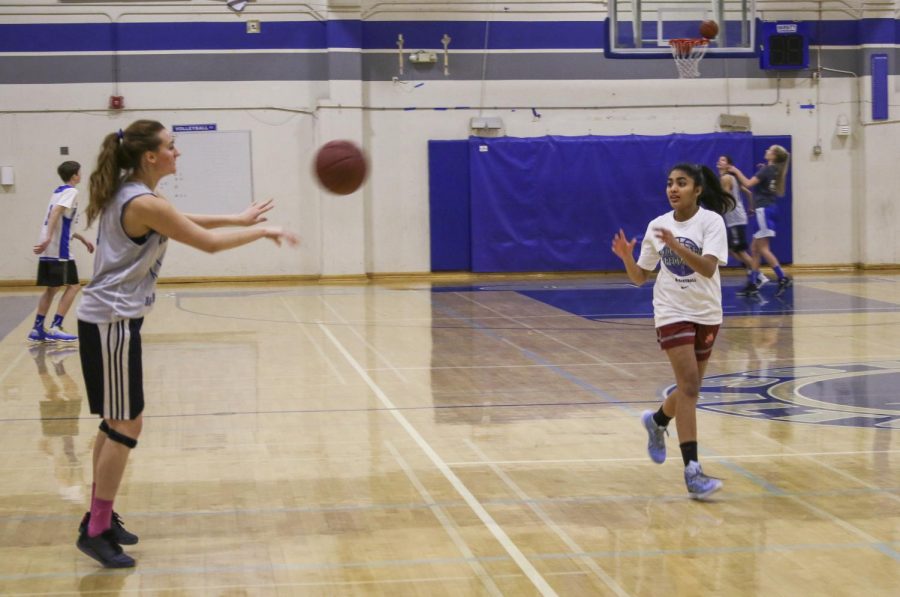 Despite winning the first quarter, the girls basketball team fell 49-30 in their preseason game against Cupertino on November 28. The loss, however, was bittersweet; the Eagles, who moved down to the El Camino League two years ago, were facing a team from the higher De Anza League. To Head Coach Jaclyn Brode, the team’s efforts against Cupertino showed a lot of progress since the start of the season.

“We played much better against Cupertino [than in previous games],” Brode said. “It was a loss but it showed a lot of progress. It’s still early in the season, but we’re progressing… I see a lot of potential in this team, so I’m excited.”

The team — whose overall record is 2-2 as of December 7 — is young, with six underclassmen on the team — three are freshmen. The many new players and relative inexperience of the girls could lead to some difficulties at the start of the season. Still, the potential Brode sees on the team has her aiming high: going 6-6 in preseason and topping leagues are goals she said are “realistic.”

“There are going to be growing pains, and it’ll take a while to catch up to speed and style, and for the girls to get to know each other,” Brode said. “They’re good players and bring a lot of positive energy, but it will take a while for us to really come together.”

Fresh players could actually work to the team’s benefit. Last year’s team, which finished with a league record of 4-8-0, was mostly composed of returning players, so the shift in the team’s make up could change things up in a good way.

There are also more players than usual, with 14 girls on varsity. The sheer number of players will allow the team to change their playing style this year — with more fresh players to be subbed in and out of the game, they will be able to run more aggressively and press the other team.

So far, the players have also shown a lot of intuition and game sense, leading Brode to eliminate set plays and only employ motion plays, unlike previous years, where she mostly employed set plays.

“This year, this team has a good feel for a the natural flow of the game, and they play well off of creating off of what the defense is doing,” Brode said. “It’s more free-flowing, they still have specific actions but they have the freedom to move within them, which gives them a lot more freedom to play how they see fit.”

While their strength may lie in their numbers, their weaknesses come from many of this years players’ relative inexperience. Brode also wants to see the team reduce their turnovers and not let the other team dictate the game. To improve, the team uses Hudl, a video review and performance analysis tool, to review and critique games.

Some of this inexperience is also countered by intensive off-season training, which allows the team to “hit the ground running” when the season starts, Brode said. The girls train four times a week preseason and postseason, doing running and weightlifting. This training also facilitates team bonding and chemistry.

“I played over the summer so I already knew a lot of the girls coming in,” freshman Mira Chiruvolu said. “[During summer practice] I got to know all of the players, I got to know how the coach was, what kind of practices she has, and at the beginning of the season I was just ready to play because I knew what was going on.”

Another bonding experience for the girls is the team tradition of riding the bus back from games together, no matter the outcome of the game. This way, players are able to reflect and sort out any tensions that may arise from a tough game.

“Our coach has this rule that not a lot of sports have that win or lose you have to ride the bus back together, and it does create that camaraderie,” Jamie said. “You have to stay on the bus, you have to be with your teammate, you can kind of cool down, talk it out, that kind of thing.”

This year’s team seems to have already meshed together very well, something Brode says has been helpful in her coaching.

“For the first time in [since I have started coaching] you don’t have to force them to get to know each other, and they always stay on the basketball courts after practice to talk to each other,” Brode said. “That inspires me, and it makes me excited to come everyday when I don’t have to coach the energy and we can dive right into playing ball.”

The Eagles play Carlmont on December 15, and will play their rivalry game against Mountain View on January 13.