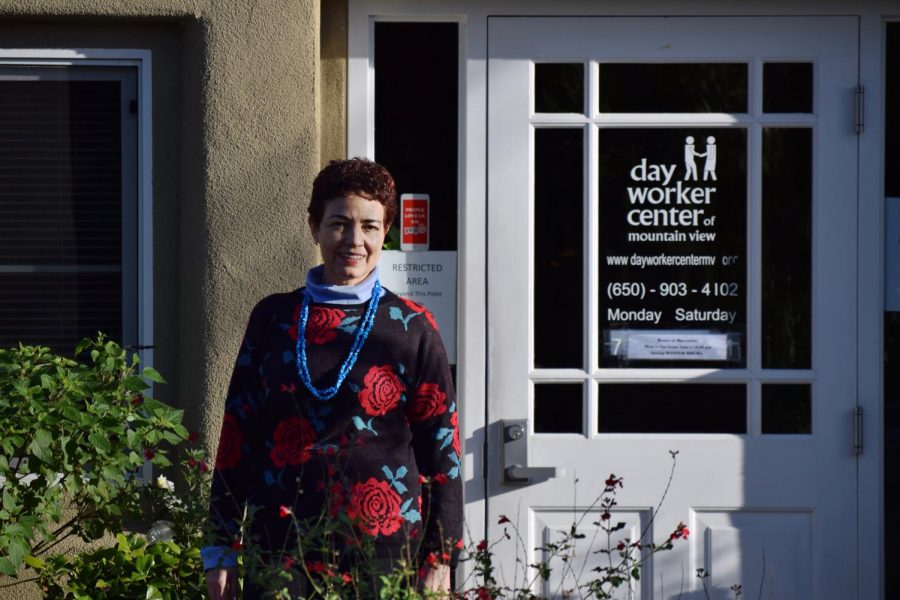 Nestled in the corner of Escuela Avenue, lush vines and shrubs frame the Day Worker Center of Mountain View. Inside, the building is a hub of activity. During the day, employers come and go and are matched by staff in the center to workers who complete jobs from landscaping to childcare to envelope stuffing. At night, the day laborers participate in classes taught by volunteers, such as learning English as a second language, how to get their driver’s license and more.

Many of the workers at the Day Worker Center are recent Latino immigrants, searching for jobs to support themselves and their families. They come to the Day Worker Center to ensure their employers pay them, as many have had the experience of working for a week and then having their employers refuse to pay. Through the Center’s data collection on employers and its list of lawyers ready to defend the rights of the workers, the Center gives workers a form of job security that can’t be found on the street.

The Center was founded in 1996 to find employees for jobs the community and other businesses had to fill. From its buildingless beginning on the street in front of Jack In The Box to its own property on Escuela, it’s grown to provide workers with a wide range of resources — $1 breakfasts and lunches, a medical van and more — so they can find their footing and consistent employment, or start their own businesses.

The center had been open for three years when María Marroquín, now Executive Director of the center, came to the Day Worker Center as a day laborer looking for work. She immigrated from Mexico, where she looked down upon the day laborers. But after coming to the Center, her perception of the day laborers shifted, and she saw the day laborer community’s hard work.

“I came, as many other people, with the misunderstanding about who the day laborers were,” Marroquín said. “I had this information in my country that the people who wait for jobs on the street are lazy people, but then later I realized who they really are and how hard they work. That became my mission in life: to educate other people, ignorant like me, about the laborer community. I found the most wonderful people — resilient, generous, supportive — and I couldn’t leave.”

Marroquín helped the Center transition from its place outside of Jack In The Box to its new building on Escuela and formed partnerships with companies to bring services like the medical van and pro bono lawyers. She also works with volunteers to expand the Center’s catalog of classes, utilizing the skills of willing volunteers in the fields they wish to educate others about.

She also never forgets the workers she’s serving. When one worker’s wife — who was in the process of immigrating to the U.S. — stopped contacting him, he assumed the worst and went to Marroquín for help. Marroquín utilized her connections to find she was still alive, in a prison near the border. After staying in prison for a few months she was deported, but then attempted to immigrate again four months later and was successful.

This worker, who requested anonymity, found the Day Worker Center back while it was still on the street to find work on Saturdays and Sundays in addition to his weekday job. At the Center, he utilized the services the Center provided and met other workers in similar situations as him.

“You usually come with the shirt on your back, and it’s the same shirt you left [your country] with,” he said. “So they give you some clothes and get you started.”

He met people with openings in their apartments, who let his family stay so they could all afford rent. They would fit up to ten people in one apartment sometimes, to afford the ever-rising rent prices.

His work at the Center brought him to the house of Sue Sullivan, a volunteer English teacher at the Center at the time. In search of a volunteering opportunity, Sullivan combined her personal project of learning Spanish with teaching English to the Center’s Spanish-speaking community after hearing about the opportunity from a friend.

While she preferred not to both volunteer at and request services from the center, she needed help digging up her garden. When she asked Marroquín for a worker, he came to do the job. He first asked Sullivan if she could buy him a $15 tool to do the job in a quarter of the time.

“I was pretty impressed with that,” Sullivan said. “He could have spun it out to earn the extra money but he didn’t, and when he went to leave he said to me, ‘I’ve looked around your property and I can do this, this, this and this so if you’re wanting to, you can call me.’”

With the extra work and the services at the Center, he began constructing his own landscaping and home exterior maintenance business. From coordinating transportation for his workers to advertisement, he grew his business and no longer relies on the services of the Day Worker Center.

And his story isn’t unusual.

“I think the majority of people that come through the Day Worker Center, that’s what they do,” Sullivan said. “They just gain traction and in general they’ll find some employer in the world outside where they’ll do a good job and they’ll say, ‘Oh, I want to hire you,’ and then they’ll just establish themselves into the community. I’ve seen so many great success stories, and it’s people who never had a chance in their own country.”