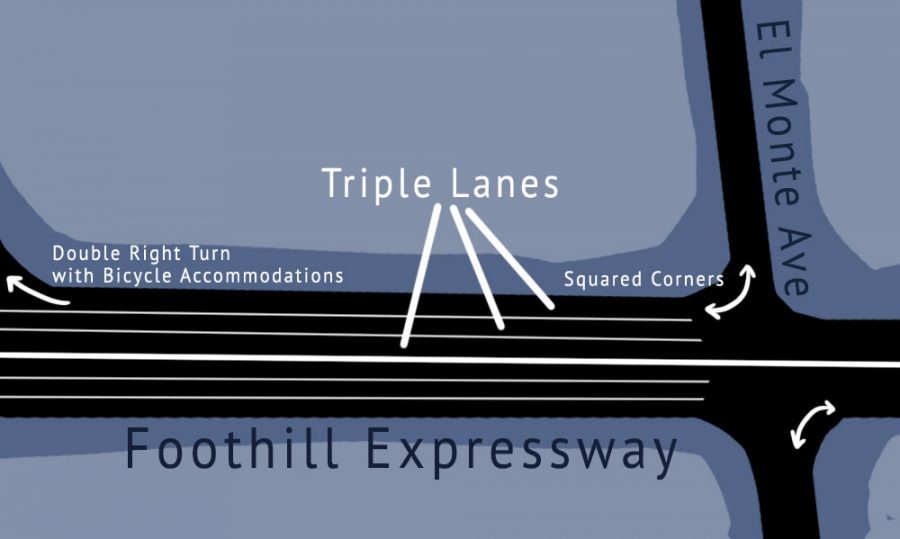 In recent years, commute times through Los Altos have only seemed to grow longer, with rush hour spanning the entire work day. According to a recent study by the Bay Area Council, 83 percent of respondents who live in the Bay Area believe that traffic congestion will not improve with time. Los Altos City Planners are hoping to address the issue by improving traffic conditions on Foothill Expressway to make it easier for both residents and commuters to travel through the area.

“We’re in the way between I-280 and US-101,” Los Altos Planning Services Manager David Kornfield said. “We have 30,000 cars a day on San Antonio that are primarily commuters going through this town. And there’s nothing that we can do about that than maybe control it.”

To decrease congestion, the project will add a third lane on either side of Foothill Expressway. In addition, there will be another left turn lane at El Monte and another right turn lane onto San Antonio on their intersections with Foothill.

“Foothill Expressway [between San Antonio and El Monte] is a big commute route in the morning,” Novenario said. “People come from I-280 and go down to US-101 to Palo Alto or Mountain View, so this becomes a bottleneck in both the morning and afternoon. We’re adding an additional lane on each side of this expressway to make it three lanes in each direction.”

In an effort to promote biking and walking as a safe travel option, the project will remove the free right turn lane from Foothill onto El Monte.

“We’re going to square [the free right turn lane] off and make it a harder right turn because [it] could be potentially a safety problem for cyclists and walkers,” Novenario said. “Cars don’t normally want to slow down on those right turns, [and] it’s hard to be seen [as a pedestrian]. There’s a tradeoff: you make something safer, but now you potentially make driving slower.”

“In my opinion, it is going to be very hard [for Los Altos to maintain its rural character],” Novenario said. “For example, adding another lane [to Foothill], while it will help with congestion, over the long term it might just add more traffic [and] induce demand. There’s a balance here between adding more lanes versus making people change their behavior.”

Even if the project is successful in reducing congestion, Kornfield claims that traffic congestion cannot be solved by road construction projects alone. Rather, the issue is in part Los Altos as a suburban community, since separating housing, jobs and entertainment inherently requires an inefficient commute pattern to emerge.

“We create housing, but jobs aren’t here,” Kornfield said. “Jobs are always somewhere else, and so you have this commute pattern, even if you’re building jobs and housing together, there’s no correlation [between the two].”

Nevertheless, Kornfield believes that a collective effort by the community is needed to solve the issue. For instance, students and parents can help by choosing to walk or bike in place of driving.

“For me, [reducing traffic congestion] comes down to personal choice and commitment,” Kornfield said. “I’ve seen a shift toward parents driving their kids to school, and I see how that affects traffic in this community because the schools are usually on commute routes. If there was a commitment in the communities or from the schools to get residents walking and riding to their schools, I think that would help the community.”

In the nine months of the project’s design phase, the county will have collected enough taxes to begin construction. Los Altos residents can expect construction to last a year to a year and a half.