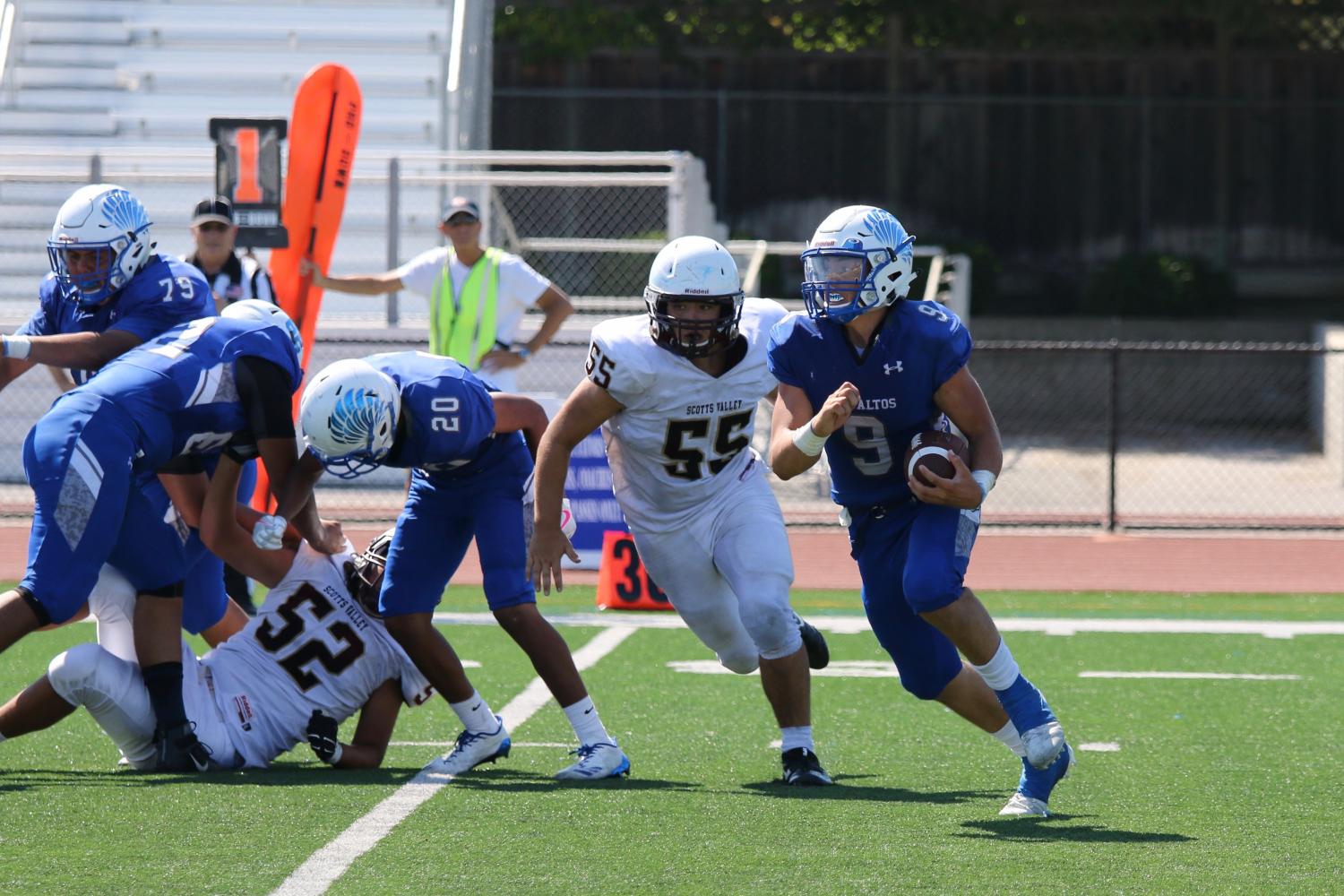 On Saturday, August 26, the Eagles dropped their opening non-conference game at home in a loss to the Scotts Valley Falcons, struggling through a lopsided contest that ended with a final score of 35-7.

Both teams looked evenly matched coming out of the gates, and the first quarter was characterized by fruitless drives due to each team’s strong defensive performance. Midway through the quarter, senior defensive tackle TJ Bush recovered a fumble to force a turnover for the Falcons. However, the Falcons held sturdy and stopped the Eagles’ drive.

“On offense, we couldn’t move the ball, and we couldn’t get downfield,” senior Evan Bauer-Murphy said. “On defense, they had fluke plays, they had trick plays, just little plays that we can fix [our response to]. We gotta do better at that.”

Toward the end of the first quarter, the Eagles seemed to have finally broken through, with junior quarterback Rocky Hidalgo throwing a 20-yard heave to senior captain Vincent Colodny in the endzone. However, the touchdown was called back due to an offensive pass interference call from the referees, and both teams ended the quarter scoreless.

After having their touchdown waved off, the Eagles slowed down coming into the second quarter. Scotts Valley came to life, recovering a Los Altos fumble and taking it all the way to the end-zone. A few drives later, the Falcons capitalized on another fumble and ended up scoring a field goal. Then, at the end of the quarter, the Falcons forced an interception, which resulted in a pick-six that made the score 16-0 at the half.

“We made a lot of internal mistakes, a lot of things that hurt our team,” head coach Trevor Pruitt said. “Penalties, turnovers; usually when you’re losing those categories right there, you tend to lose the game.”

The second half started similarly to the way the first had ended, with Scotts Valley scoring directly from the kickoff. Although Evan blocked the Falcons’ field goal attempt, they scored on another drive late in the quarter. Meanwhile, the Eagles were continually plagued by flags from the referees.

“There’s no way we can sit here and blame the referees,” Pruitt said. “We’re the ones making those mistakes, we need to tighten up, and we need to clean it up. That will start with me.”

Scotts Valley scored off another pick-six early in the fourth quarter and converted the field goal to push the score to 35-0. And although the deficit was too large for a comeback, the Eagles stormed back on a drive and finally got on the board, with Rocky launching a bullet to junior Ben Parker in the end-zone. Senior Alex Tochihuitl converted the field goal, and the game ended with a final score of 35-7.

“Next game, we’re going to take it to the next level and make sure we get the win,” Senior Angel Romero said. “It all starts here in practice on Monday. If it means staying after practice for another hour, that’s what we have to do to get the win.”

The Eagles look to bounce back in a home game against Soquel on Saturday, September 2.