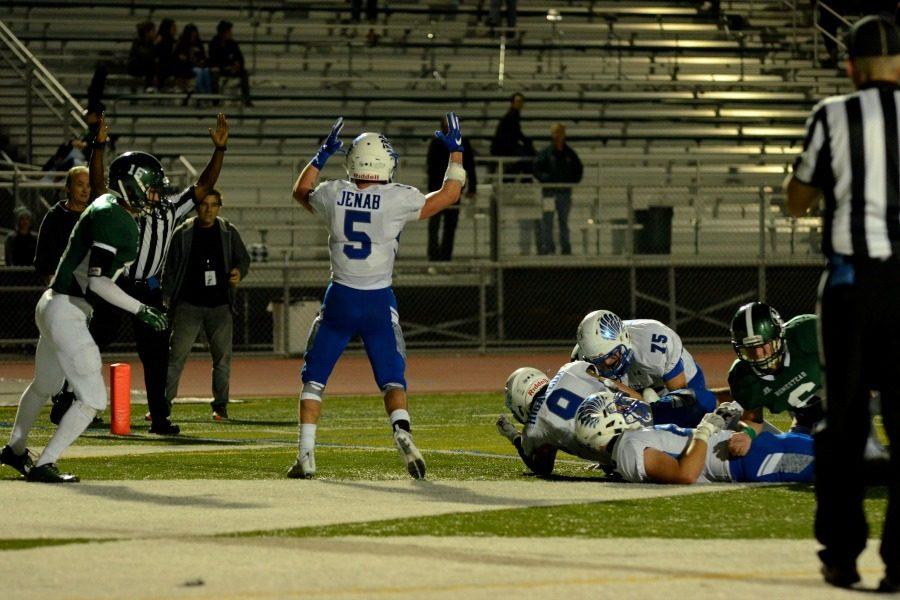 All eyes faced the bright-lit field on a cool Friday night, as the Los Altos Eagles were set to challenge the Homestead Mustangs in a much anticipated CCS playoff game. Going into the game, Los Altos finished the season with a 7-2 record to make their first CCS appearance in six years. Homestead previously handed the Eagles one of their two losses in the regular season, beating them with a score of 13-18. However in their second encounter, the Eagles were unable to overcome the Mustangs and lost with a final score of 16-17.

“We felt really great coming in,” senior Markell Reed said. “We felt like we were the underdogs of this game and knew we had to bring it to them and give everything we’ve got.”

At the start of the game, both teams committed two turnovers, setting the stage for a defensive battle. Quarterback senior Cooper Cornell threw an interception early in the first but Los Altos got the ball back with an interception of their own. Homestead was able to get a good drive going that ended with a touchdown, making the score 7-0 at the end of the first.

In the second quarter, Los Altos was able to build momentum, evening the score after a one yard run by junior Erik Skov. Their momentum continued as they got a safety to take the lead by two points. With 43 seconds left, Los Altos scored a defensive touchdown off Homestead’s bad snap to take a 16-7 lead going into the next half.

The third quarter saw a series of drives by both teams that resulted in punts or turnovers, with no points scored.

The fourth quarter began with a Mustang field goal, allowing Homestead to close on the Eagles’ lead making the score 16-10. However on the Eagles’ next drive, a crucial turnover allowed the Mustangs to score another touchdown.

Down by one point, Los Altos was able to get into Mustang territory but had to settle for a field goal attempt. Unfortunately, kicker senior Albin Mollerstedt was unable to convert the field goal, allowing the Mustangs to take over. Homestead ran out the clock but not before giving the Eagles one last chance to score. With under 30 seconds remaining, Homestead regained possession and ran the clock to end the game. The final score was 16-17.

“We felt like there were a couple missed plays [and] missed opportunities but these guys played their butts off,” Head Coach Trevor Pruitt said. “I make more mistakes [coaching] than [the team] makes out on the field.”

Despite the tough loss, Pruitt is still proud of what his team was able to accomplish this season.

“I’m proud of the human beings that are on this football team,” Pruitt said. “[They’re] not just football players but [also] people in the classroom and [part of] the community. We’ll be ready to go next season.”