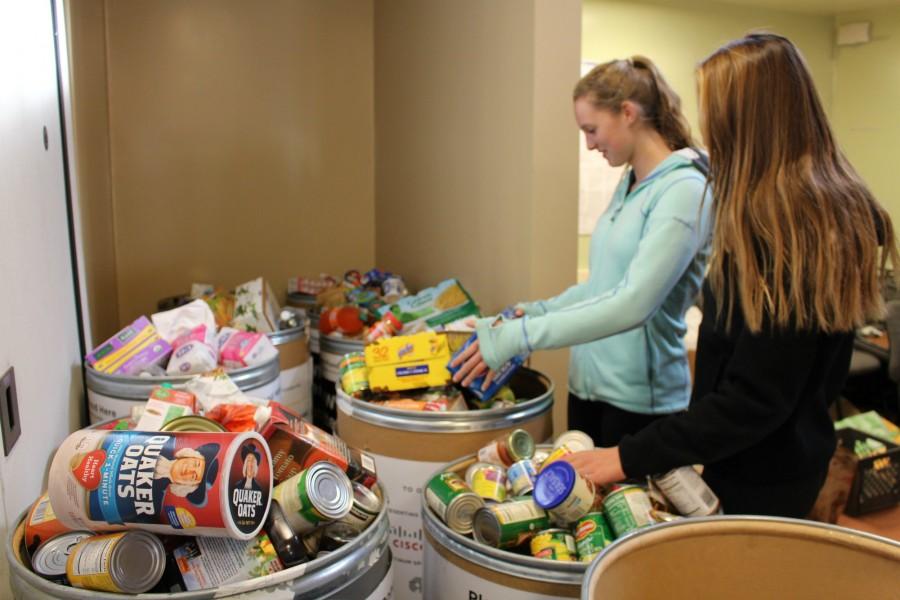 This year, the school did just that and more, surpassing the goal by over 4,000 pounds with the help of online donations, which extended the collection time by another week.

Each November, ASB coordinates with Second Harvest Food Bank of Santa Clara and San Mateo counties to collect non-perishable food and money from the community. As of December 5, ASB collected $8215.05 and 3825.07 pounds for a total of 24362.695 pounds from LAHS and Draeger’s Supermarket. Monetary donations were converted to pounds with the Food Bank’s calculation that one dollar is equivalent to 2.2 pounds.

“Second Harvest Food Bank relies on our totals,” Assistant Principal and ASB advisor Suzanne Woolfolk said. “If we do not hit our food totals that Second Harvest expects or hopes for from LAHS, that affects the food bank over the holidays.”

Besides the contribution from the staff and students from the high school, ASB relied on the donations collected from Draeger’s.

“ASB kids sit in the cold for hours and hours outside the store asking for donations, and so I think that is meaningful, and they are using their time and energy at school as well as at home,” Woolfolk said.

ASB delivered the food and money accumulated over the course of the food drive directly to Second Harvest. According to its website, Second Harvest provides food to nearly a quarter of a million people every month and around one million meals every week. While 1 in 10 people in San Mateo and Santa Clara counties rely on Second Harvest for food every month, 1 out of 3 kids does not have access to food to eat every day.

To collect donations from all parts of the campus, donation boxes for food and money are placed in every second period class and collected by ASB later in the day. Both staff and students alike made daily reminders to donate informing the community of the progress made through the collections.

“Because Los Altos is such a small town, the community definitely gives a lot to us,” ASB vice president senior Olivia Jain said. “A lot of our families at Los Altos do depend on food donations, and because so many of our students are impacted by [the food drive], it is a great way for those who are not [affected] to give back to the community.”

The success of the food drive resulted from competition between second period classes and an incentive of a class party of In-N-Out burgers. Offering an incentive proved to play a key role in the food drive as it pushed both students and staff to donate.

“As [students are] still growing up and developing, ASB believes that we can offer an extrinsic reward, like In-N-Out burgers, to help support the intrinsic reward of helping others,” Woolfolk said. “There are so many requests placed on kids of all sorts, that [rewards are] a positive spin on the whole effort. We do not need to [give a reward], and some years there has not been a reward, but it seems to make it more fun.”

Despite the incentives, the purpose of the food drive is to promote raising money for the greater good and include charity in the lives of students.

“Initially, there is always a sense of competition that gets promoted, but at the week goes on and people start to donate, I think it is more about giving back to the community, and the [students] see that,” Olivia said.