‘Flying through the air’ with Kevin Andrews 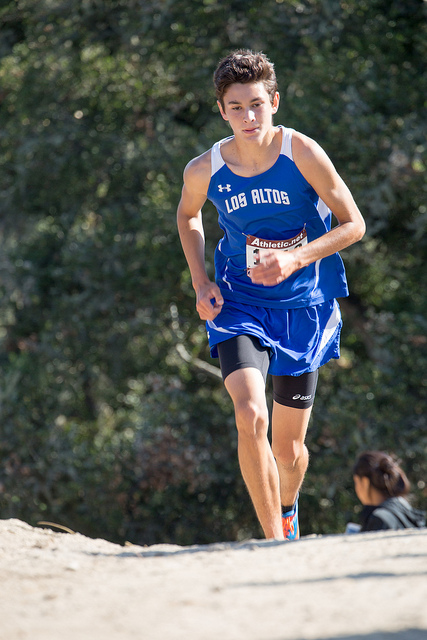 By Tino Tugwete and Zooey Nguyen

“Kevin is full of energy and genuinely enjoys being out there on the trails pushing himself,” Coach Stephanie Mackenzie said. “The only complaint we ever get is that he wants to run more miles.”

Kevin had years of experience in long-distance running before joining the team. He won the 1320m event at the Junior Olympics in his fourth, fifth and sixth grade years. On Egan’s track & field team, he ran an impressive 4:48 mile to finish second in the league. His extensive practice and natural talent led him to quickly land a spot on the Los Altos’ varsity cross country team,  where he has achieved much success. With a time of 16:26 for the 5k at the annual Clovis Invitational, Kevin is competing with the elite.

But for Kevin, cross country is not just about mile times. His love of the sport has made it integral to his life and how he defines himself.

“Just going on runs is always really fun.” Kevin said. “Running fast… it’s like flying through the air. If I didn’t have running, it’d be pretty hard.”

Kevin has had his fair share of comparisons with his older brother, track & field star Tommy Andrews ‘17. But instead of shying away from such comparisons, he cites his brother as one of the sources that encouraged him to pursue the sport.

“My brother… was a sprinter, I’m a long-distance runner,” Kevin said. “But seeing his success and seeing how much he had fun during track and field [inspired me].”

And Kevin’s not intimidated by the upperclassmen — he consistently places top three in the team. The supportive environment of cross country, in which members cheer each other on during races and keep pace by running in groups, is reflected in his teammates’ support of him.

“It’s a little hard since they know the courses, but they’re willing to tell me, ‘This is what you need to do, this is where you need to push,’” Kevin said.

This team culture is important to Kevin, who stays positive during intense practices, encouraging his teammates while pushing himself.

“He is very mature for being a varsity teammate as a freshman,” Coach Abraham Galvan said. “He wants to be a part of the team and it shows. Like every great athlete, he enjoys the good parts and is also critical of himself when he needs to be.”

Kevin and other varsity members are working with each other to qualify for the CIF State Championships this year. And though he won’t have to worry about college applications for a few years, Kevin hopes to eventually run at UCLA.

Due to his strong performance in his first year on the team and the clear goals he’s laid out for himself, both Kevin and his coaches are excited to see where his running career goes in the future.

“Sometimes standout freshmen can burn out… and lose the joy in running and competing. I just can’t see this happening for Kevin,” Mackenzie said. “He… loves to run for all the right reasons, so I think he will do big things in high school, college and beyond.”