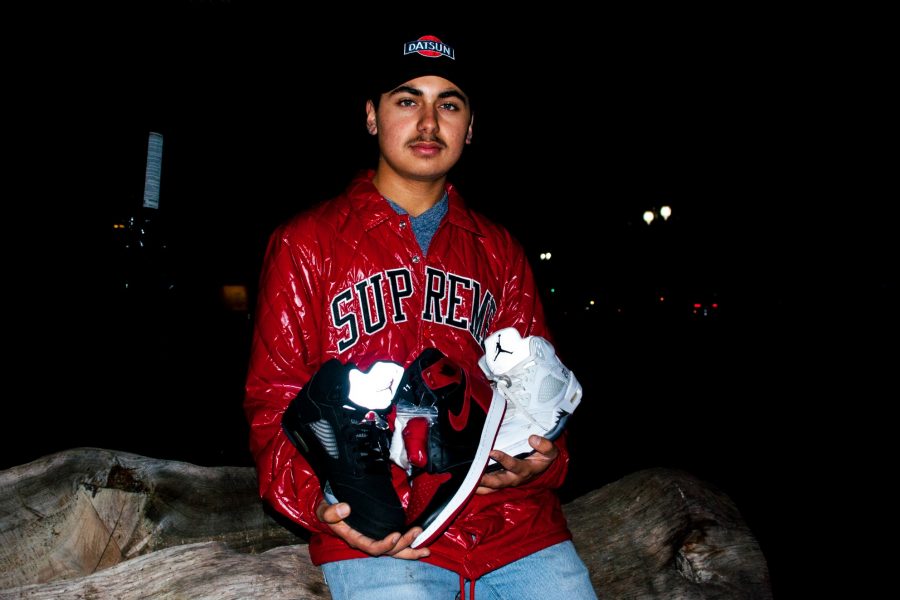 At just 15 years old, reseller Nathan Virrueta sells some items for 1000 percent of their original price. Capitalizing on the popularity of brands like Supreme and Jordans’ limited nature, he uses pop culture’s obsession with these limited items to make profit and fuel his own love for designer clothing. Two years ago, Nathan was looking to make money, but was not old enough to be employed. The reselling game offered a perfect opportunity for him.

“I was 13 or 14 at the time and I wanted to make money immediately and start right away,” Nathan said. “I didn’t want to [start making profit after] two years… and I had money to invest.”

Resellers like Nathan buy clothing and shoes from brands like New York’s Supreme label and resell, or “flip,” them for a higher cost. Many of their customers want to get their hands on products sold by brands that work in very limited quantities.

“There are shirts that are $50, that could [be sold] for $500,” Nathan said. “[Resellers] make mass profit off that… [Supreme items] are limited and if you can’t get it, the people that do get it abuse that and resell it. I’ll abuse that too.”

Rocking his own Supreme merchandise, Nathan acknowledges that the resale of brands like Supreme is not necessarily fairly priced. The cost is often inflated tremendously by the reseller.

“[Supreme is] very limited,” Nathan said. “Anybody can put their own price on it. There are some things Supreme releases that are very limited, maybe there’s like a hundred things that were released throughout the world.”

With Nathan’s savvy in the reselling industry he understands the reality of brands like Supreme and how they make their profit.

“Supreme is not a designer brand,” Nathan said. “It’s not something super high quality, that’ll last you years and years, like True Religion —  that’s a designer brand. People who hate [Supreme] think that there’s too much hype about it and [that] it’s ridiculous.”

Nathan recognizes the hype culture surrounding brands like Supreme and Bape, and he acknowedges that that fuels the desire that leads his peers and customers to purchase these brands regardless of their drawbacks.

Nathan recalls how he got started in the competitive and lucrative industry.

“I started off with luck, trying to be [online when products were released],” Nathan said. “I’d wake up at like 8 a.m. because [Supreme is] in New York. It started in New York and so their time is three hours ahead, and at eleven over there they release their [merchandise].”

Other than selling through their highly visited website, Supreme’s limited products are also sold in a select few retail locations throughout the world, with only two stores in the United States. Nathan does not have easy access to these two stores, but even if he did, his actual chances of attaining Supreme products in-store would be low.

“There’s lines that wrap around the whole block, like probably three times [around],” Nathan said. “They have to close down the street because there’s some drops that are really important. If [the release is] hyped then [people will] be in lines. There’s riots there, not huge riots, but people do get mad if you cut them.”

In order to get a leg up in the competitive reselling business, Nathan, and many of the most successful resellers, use tools called bots. Bots are softwares programmed to automate a task; Nathan uses them to send orders to Supreme’s servers as quickly as possible when new products release.

Although bots do not assure that you will be able to buy items online, they come at a hefty price, ranging up to hundreds of dollars.

Using bots, Nathan is able to sell about ten to fifteen items every several weeks. Though he enjoys reselling, he doesn’t see himself continuing the career in the future. He plans to make other investments in the years to come.