Fishy business with the Hofmann brothers 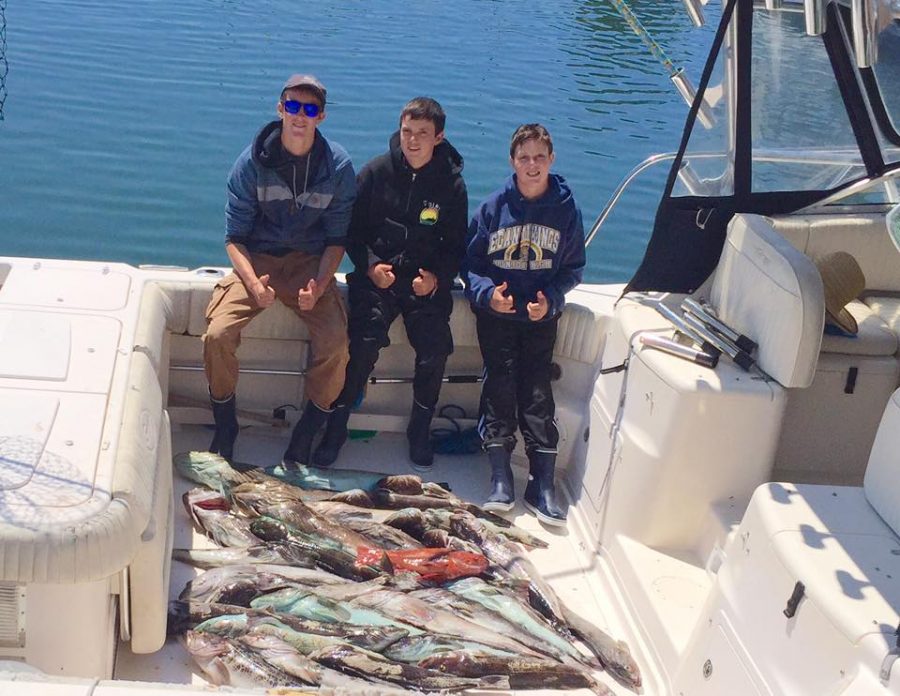 At 4 a.m. on a summer day in Los Altos, you can see dark houses and hear crickets. But if you drive up to the Hofmann household, you would be able to see three brothers, senior Hayden, sophomore Baylor and freshman Grady Hofmann, packing their fishing rods, hats and lunches in their car as they head out for Santa Cruz to fish for the next 12 hours out in the ocean.

These three brothers have fished since before they could remember. In June 2016, they decided to take their fishing skills and turn it into a company: Point Fish Co. For the last year and a half, the brothers have been developing Point Fish Co. to catch and sell fish to local customers on Facebook and to wholesalers for farmers markets.

While the company was started because of the boys’ love for fishing, it was also an opportunity for the brothers to get closer as they got older and busier. When Hayden got his driver’s license, the company truly came to life, as they no longer relied on their parents to decide whether or not they could fish each day.

“[Point Fish Co.] started because now I get paid for something I would do for free,” Grady said. “Fishing is expensive… and now we’re making a little money on the side which is great.”

In spring of 2012, Grady suffered from viral-induced aplastic anemia, a severe life-threatening illness that causes the bone marrow to stop working. This rare illness caused the entire family to be in a state of distress as Grady received a bone marrow transplant and spent over a year in isolation. He was unable to attend school, play sports, and fish during for one year. The Hofmann brothers have a very unique bond but Grady’s recovery pulled the boys even closer together. In order to pass the time while Grady was recovering in isolation, the boys would talk about starting a fishing business.

“[Fishing] was just like a way for us to escape all the madness… It was something that was a shared passion together, something we all love to do together,” Baylor said. “When we get older, and we’re all busy with our own stuff, we can always come back and do something that we love together.”

“They were always really close as brothers,” father Rusty Hofmann said. “I quite frankly didn’t think it was humanly possible they could get closer, as their father, and then when this happened, they did. They had gone through a really tough time for a long time and just wanted to spend more time together.”

The boys have spent two summers now fishing almost every day. While many students are on vacation, at a camp or working during the summer, the Hofmann brothers are going miles out in the Pacific Ocean to sell.

“A major reason we started the company is that the fresh fish [sold at grocery stores] is at least two or three weeks old, and the [oldest] we have ever sold is three days,” Hayden said. “It is perfectly iced, and a lot of times we filet it right in front of them. Our prices are like the same prices as Safeway, we sell tuna for probably $25, $3-$8 less than Draeger’s.”

The income the company brings in is put into a separate bank account for the boys. Recently, they have considered donating partial amounts of their income to Lucile Packard Children’s Hospital, where Grady was treated. In December, they plan to purchase, wrap and deliver legos to children in the Bass Center who are in isolation, recovering from bone marrow transplants.

They are unsure about whether or not this company will continue in years to come.

“Once Hayden goes to college I think he is out of the business and it will just be Grady and me,” Baylor said. “Then once I leave I don’t think we’ll have the business. This is not going to go for more than five years.”

To their father, the business has been a great learning experience for the boys and made their brotherly bond stronger than before.

“A lot of people think I’m crazy to let my three boys go 25 miles out into the ocean every day and fish, but I think it has been a great experience for them,” Rusty Hofmann said. “It’s brought them confidence and really helped them mature as adults and grow up, because they have a lot of responsibility when out there on the ocean.