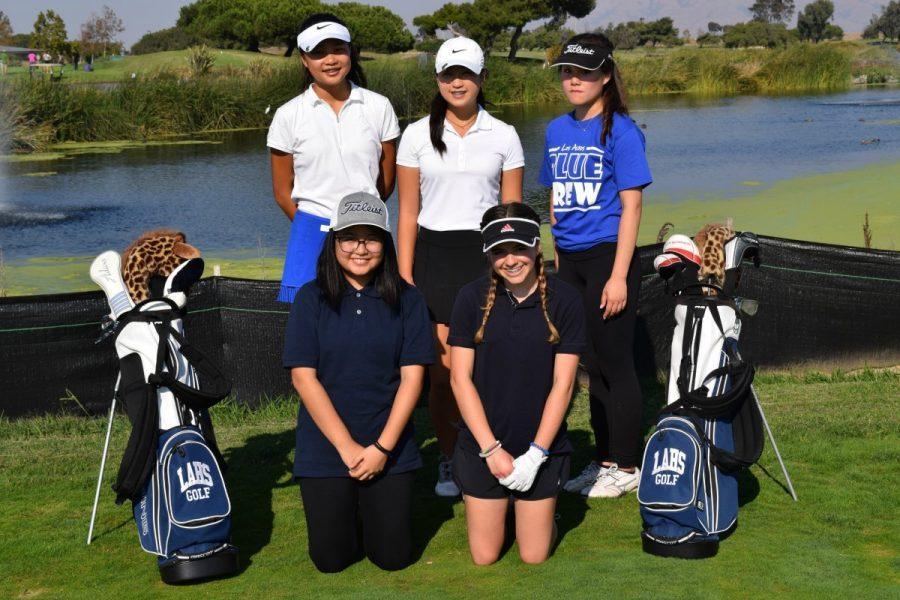 This fall, a group of five girls made Eagle history by forming the first-ever girls golf team. In the past, Los Altos only had a single coed team that competed in the spring. After talking to parents of incoming freshmen players, head coach Richard Fujii, who also manages the boys team, decided to add a girls team to the season roster.

“We had three girls in the co-ed golf team last year,” Fujii said. “Two of those girls played in a majority of matches. We felt that there was a need to start a girls team, [so] Ms. Cave and Mrs. Satterwhite got the ball rolling.”

This year’s team is primarily made up of underclassmen, with one freshman, three sophomores and one junior. While many of the players are playing their first season and are unfamiliar with the sport, the team will play in the upper division, competing against schools like Gunn, Palo Alto and Los Gatos.

“We have one team goal, which is to improve every match, to get better from where we start in August to how we finish in [the] end of October,” Fujii said. “Our individual goals are for players to improve their stroke averages, [and] to get three of our girls to league finals, hopefully into CCS [as well].”

The team is currently gearing up for upcoming matches. The girls practice Monday to Thursday at Los Altos’ home course, Shoreline Golf Links from 4:00 to 5:30 on most days. When the team plays practice rounds on the course, practice can last until 6:45.

Golf matches, are played off-site at either Shoreline or another team’s home course. Each team can have five to six players, so they tee off in three groups of four. Each group has two players from one team matched against two players from the other team. When all three groups finish the round, the final score is calculated by summing the best five individual scores: the winner of the match is the team with the lower total score.

“You need to be very disciplined because you don’t all just play at once like in a lot of team sports,” sophomore Brynna Mitchner said. “You have to focus on your own game while [paying attention to] how it contributes to the entire team and the outcome. So you really have to [make] yourself a better player individually.”

Usually, a team with six players drops the highest score in every match. For Los Altos, all five scores count. Nevertheless, Mitchner believes that the small size of the team is a good thing.

“I think it’s really unique that the team has just the minimum amount of players, so everyone plays a really important role,” Mitchner said. “Everyone has to support each other because we know how important it is for everyone to contribute… I think that so far, everyone has been getting along really well and really supporting each other, even though some people are new to the sport completely and some people have been playing for a long time.”

Veteran players freshman Caris Kim, sophomore Maddie Jun and junior Samantha Kuo are all excited for the new season. They look forward to playing against other schools with more experience and developing their individual and team skills.

Despite the pressure of competing against some of the top schools in the area, the coach maintains an optimistic outlook.

“It should be a fun season, and I’m really excited,” Mitchner said.