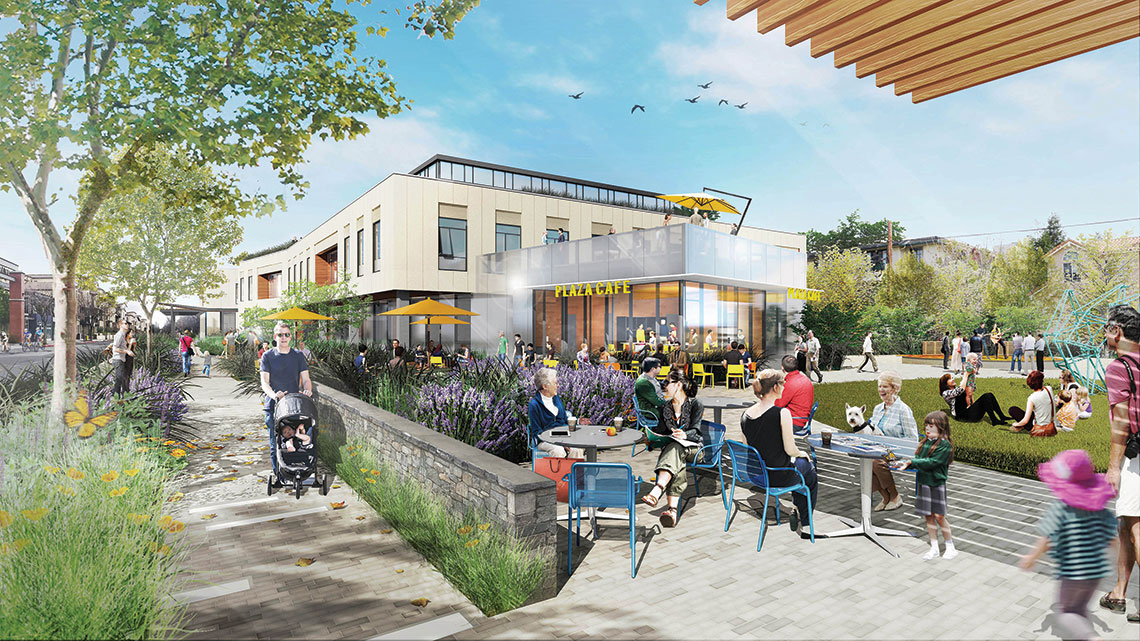 By Cameron Avery and Anisha Desai

On Thursday, May 4, dozens of green-clad Los Altos residents packed City Hall to voice their support for First Street Green at a Planning and Transportation Commission (PTC) study session. The proposed development, brainchild of property developer Los Altos Community Investments (LACI), consists of a multi-story office building neighbored by a public plaza on a section of First Street across from Safeway.

LACI Principal and Founder Anne Wojcicki will fund the project entirely. Her motivations behind the development are purely philanthropic, according to LACI representative Janos Libor.

“[Wojcicki] likes to spend her free time in Los Altos and brings her children here,” Libor said. “The mission of LACI is to maintain Los Altos’ vibrancy and its village charm. [Wojcicki] wants to give back to the community, and this is one way to do it.”

Because the development will displace 67 parking spaces, current plans detail a multi-story underground parking structure which would replace the existing spaces and provide an additional 40 public parking spaces on the first level. The remaining levels would be reserved for tenants of the office building.

LACI hopes to gain special approval for a three-story office building, which is not currently allowed under the zoning code. In order to gain potential exemptions, developers must integrate “public benefits,” which are project features that add value to residents. Under the three-story plan, LACI will grant 7,400 square feet of its office land to the public plaza. However, if LACI is unable to obtain the exemption, they will build a two-story office building instead, reducing the amount of public space for the plaza.

Residents’ opinions of the project have been overwhelmingly positive. In emails to the PTC made available for public access and in citizen remarks delivered at the meeting itself, support for the project dwarfed opposition for it.

Proponents of the office building claim that the increased foot traffic resulting from tenants  will boost the local economy. LACI estimates that the development will generate $1.2 million in additional revenue for local businesses annually, according to data extrapolated from a City of Los Altos-commissioned study published in February this year.

While First Street Green encompasses both the office building and public plaza, supporters of the park do not necessarily support the entire project.

LACI representatives say that the plan and development process aim to mitigate the effects of traffic as much as possible. LACI is currently conducting a traffic study to examine the consequences of developing the office building, and has bought land on Shasta Street for a parking exit to mitigate detrimental traffic effects. LACI is also talking to residents who live near the proposed development to understand and address their concerns.

“I’m concerned about the building heights [on First Street,]” a resident said at the PTC study session. “I think we should stick with our 35-foot height limits downtown… Tall is tall, and you can’t hide it.”

Supporters of the project, however, claim that in light of downtown’s economic decline and residents’ lack of interest in it, action must be taken.

The final decision, though heavily influenced by the PTC, rests solely with City Council. Though no dates have been finalized, it may take until 2018 for City Council to make a final decision. If approved, LACI estimates that the grand opening will be in 2020.