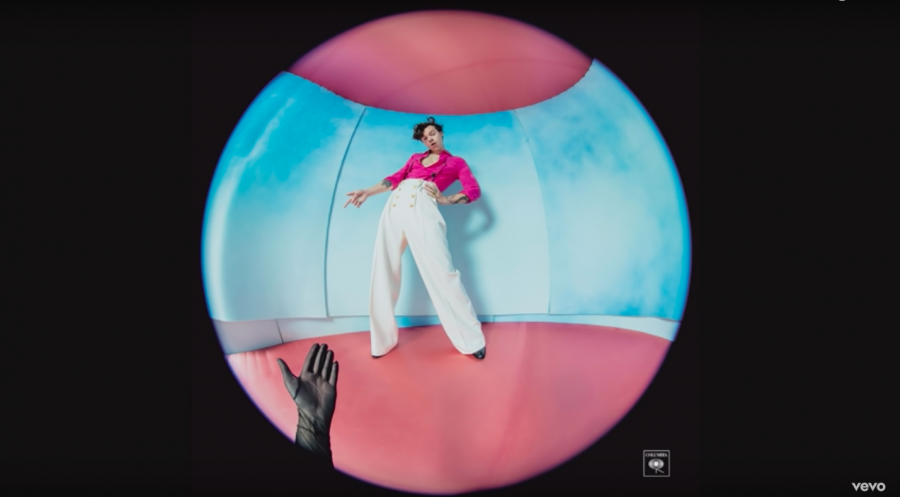 On Friday, December 13, Harry Styles, a former member of One Direction, released his second full-length album, “Fine Line.” After being a self-proclaimed and proud “Directioner” for over half my life, I really wanted to love this album. Unfortunately, “Fine Line,” a disjointed mishmash of genres, fell flat compared to Styles’s debut “Harry Styles.”

“Fine Line” was much more ambitious than Styles’s first album. Unlike “Harry Styles,” which was Styles’s first exploration of the kind of artist he wanted to be outside of One Direction, “Fine Line” has a clear emotional and artistic purpose. This album is largely based off of his relationship with French model Camille Rowe and their eventual breakup, and is roughly split into three parts detailing the love, heartbreak, and subsequent growth and acceptance that came from the relationship. Yet this album fails to define the type of artist Styles is, as it often feels disjointed—even more so than “Harry Styles”—and, despite weeks of listening, I find myself unable to recall what songs sound like when not listening to them.

To me, this record lacks authenticity. I have loved One Direction for nearly a decade, and what I have always admired about Styles is his showmanship. Even within the group, under restrictions of the label, his charm was infectious. As a soloist, he’s branched out even more, wearing outlandish and bright outfits, thick jeweled rings adorning nearly every finger, and seeming to not care about just how messy and greasy his hair looks. But that’s all these quirks are—a show, a persona he’s created to resemble authenticity, intimacy. In many ways, I admire the way he’s able to make people feel as though they know him while still largely keeping his heart and himself safely guarded. But there’s a price to be paid when you don’t let yourself be known—when you let too much feel like a show.

This was “Fine Line”’s downfall, in my eyes. “Harry Styles” felt like an earnest foray into solo music, into figuring out the artist Styles saw himself as. “Fine Line”, on the other hand, focused a little too much on the emotions it wanted to evoke rather than the emotions it wanted to communicate. “She,” for example, is a song exploring the idea that Styles had and continues to have unrealistic expectations of love and “the one,” as he notes that this mysterious ‘she’ “lives in daydreams with me.” Yet the potential power of this song is watered down by the heavy production used in an attempt to evoke and imitate old genres of music. His vocals are muddled by heavy reverb and the near three-minute guitar solo at its end leaves the listener almost forgetting everything that preceded it. “Cherry,” “To Be So Lonely,” and “Sunflower Vol. 6” are similar in this way. “Cherry” could’ve been incredibly impactful as Styles repeatedly, almost pleads “Don’t you call him baby,” struggling to come to terms with the end of his relationship. But his voice sounds far away, almost as though it’s being heard through a wall, and it separates the listener from the experience. Additionally, throughout these three songs Styles sells his voice short, singing primarily in his lower register and rarely straying beyond it.

I so desperately wanted to love this album. I’ve, arguably, been in love with Harry Styles since I was nine-years-old. There are still some incredible moments on this album. “Lights Up”, one of the strongest tracks on the album, detours from the structure the album aims for, presenting reverberating harmony and heavy bass as Styles seems to ask himself and his audience, “Do you know who you are?” and to “Shine, step into the light.” “Falling” is a simple and heartbreaking piano ballad that lets Styles use his range to its fullest as he confesses, “What if I’m someone I don’t want around?” And my personal favorite, “Canyon Moon,” is plain fun with an upbeat, driving acoustic guitar and a perfect clarity to Styles’s voice as he is finally able to look back at his once happy memories of the relationship without pain.

“Fine Line” is a good, but not great album. Although the writing and the songs itself are good, Styles took on too many different genres and experimented a little too much to make the album feel cohesive or seem like a truly authentic and earnest work. And while some may enjoy the range of styles and the versatility of the record, it personally made the album fall flat and feel rather disjointed.