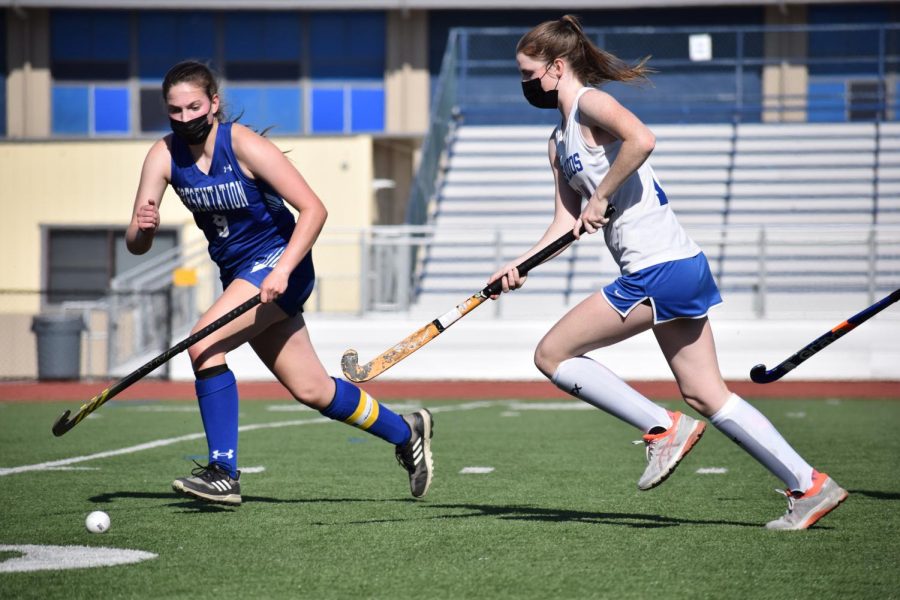 Senior Maura Kelleher chases after the ball alongside a Presentation player. The Eagles beat the Panthers in a 2–0 shutout at their last home game of the season, marking the team's 11 seniors' last game ever on LAHS turf.

By Emily McNally and Anika Sikka

To add to the lasting memory of their emotional senior game, the varsity field hockey team shut out Presentation High School with a 2–0 win on Monday, April 19.

Before the game began, the atmosphere was lighthearted as the team celebrated its 11 seniors. The junior varsity players created a tunnel using their hockey sticks, which the seniors walked through while receiving gifts — flowers, mini hockey sticks and personalized hockey balls — from their teammates. Even with a large number of seniors, the underclassmen shared touching and personal speeches for each of them as they walked across the field.

After the heartfelt celebration, the Eagles shifted their focus from recognizing their seniors to dominating the Panthers. Keeping with tradition, Los Altos High School had all of their seniors start the game, and within seconds of the signal to start, senior Lucy Gilbert-Fagen gained possession of the ball and surged forward, putting the Panthers on defense. The tone was promptly set for the rest of the game as the Eagles maintained an unrelenting offense, only allowing Presentation to slip by with an offensive breakaway a few times.

“We have been working on being more consistently aggressive in the circle when we are attacking and better marking defense inside the 25-yard line,” varsity coach Mary Donahue said.

In the second quarter, senior Elana Eisenberg broke through Presentation’s defense and took a reverse shot, scoring the Eagles’ first goal of the game. Later in the quarter, the Panthers were able to get deep within LAHS’s defense, but senior Audrey Boennighausen intercepted the ball before they got within shooting distance of the goal. Throughout the first half, the Eagles had multiple opportunities through short corners to score, although they were unable to finish, a trend that continued into the second half.

In the fourth quarter, junior Baya Damian scored another goal, pushing the Eagles to a 2–0 lead. Throughout the game, the Eagles’ junior varsity team and family members could be heard cheering from the stands.

“I’m grateful that we were able to have friends and family come to the game during the pandemic, because they’ve always been our number one supporters,” Audrey said.

The final whistle signaled not only the end of the game, but also marked the end of a long journey. The team began practicing in the summer of 2020, and now, over six months later, the seniors finally enjoyed the fruits of their labor.

“Being a senior in this time of uncertainty is something that requires a lot of perseverance, dedication and commitment,” junior Diya Gupta said. “Instead of complaining or talking about the vast length of our season of uncertainty, the seniors took every day as an opportunity to better the team.”

Senior Alexis Musick reflected on how field hockey has helped her get out of her comfort zone in the last four years, especially since she was first introduced to the sport her freshman year.

“Not only have I grown to love the sport, but the group of girls I met and got close with are some of the nicest people I know,” Alexis said. “I think field hockey has taught me that as scary as new things can be, more times than not something good will come out of it and so I’m super glad I played.”

Even as she leaves the Eagles’ home turf, Audrey also feels that field hockey will leave a lasting impression on her life.

“I’m confident that being on the field hockey team will be the first thing I think of when I reminisce about high school in the future,” Audrey said.

Although it was a bittersweet game for Donahue because she’s known many of these seniors since they were in middle school, she was proud of the overall outcome of the game.

“This was definitely the strongest overall batch of seniors and they play very well together, so putting them on the field together was really fun to see,” Donahue said. “We were so lucky to have been able to have a season to see them all play together against the very good teams in our league.”