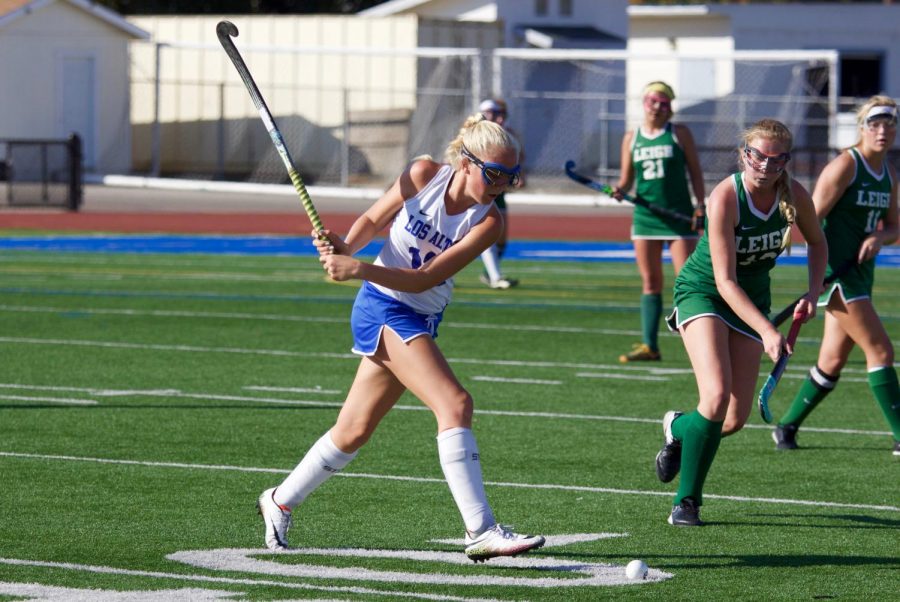 Junior Lisa Larsson swings for the ball as the team makes controlled passes up the field in their game against Leigh on Wednesday.

After a high-flying 15-3 season, Field Hockey placed 2nd in SCVAL and earned themselves a spot in CCS. Their first game was at home against Leigh High School, a team they lost to earlier this season. The Eagles took every chance, eking out a tight 2-1 victory to advance in CCS.

“We played them once before in the season, so we knew how they played and we looked at the film,” Coach Mary Donahue said. “They are really fast and have some [skilled] players so we were just trying to keep them in check as much as we could.”

The first half was fast-paced, a possession-based game in the midfield with few chances to score. A 1-on-1 chance for Leigh was saved by the foot of senior goalkeeper Sophia Taglio. Seniors Phoebe Aaronson and Courtney Athens both had shots blocked. With five minutes left in the half, Los Altos were able to break through Leigh’s strong defense. The ball was lofted into the center of the box by Freshman Elena Eisenberg and nudged in by Freshman Lucy Gilbert-Fagen into the bottom left corner to give the Eagles a 1-0 lead.

The pace of the game increased in the second half. After twelve minutes of an even possession-based game, Los Altos found the back of the net again. The ball was played into a crowded box, where it was nudged around by both sides before falling to Junior Lisa Larsson in the middle, who was able to scoop the ball into the left corner to give the Eagles a 2-0 lead.

Los Altos dominated the rest of the game, playing a possession game entirely in Leigh’s half. Leigh had another close chance to score from a corner but a low shot was placed just wide of the goal. Los Altos had a comfortable lead throughout the rest of the second half. Leigh were able to find an opening and score with four seconds left in the game. The ball was passed in a clumped box and shot in, but it was too late to do any damage, and the game ended 2-1 to the Eagles.

“Offensively it was a little bit ragged but I think Leigh has a really good defense,” Donahue said. “They don’t let a lot of balls through, but we did a better job in the [goal area] and thought that was the key to the game.”

Los Altos will play the next round of CCS away vs Gilroy High School on Saturday, November 11th.