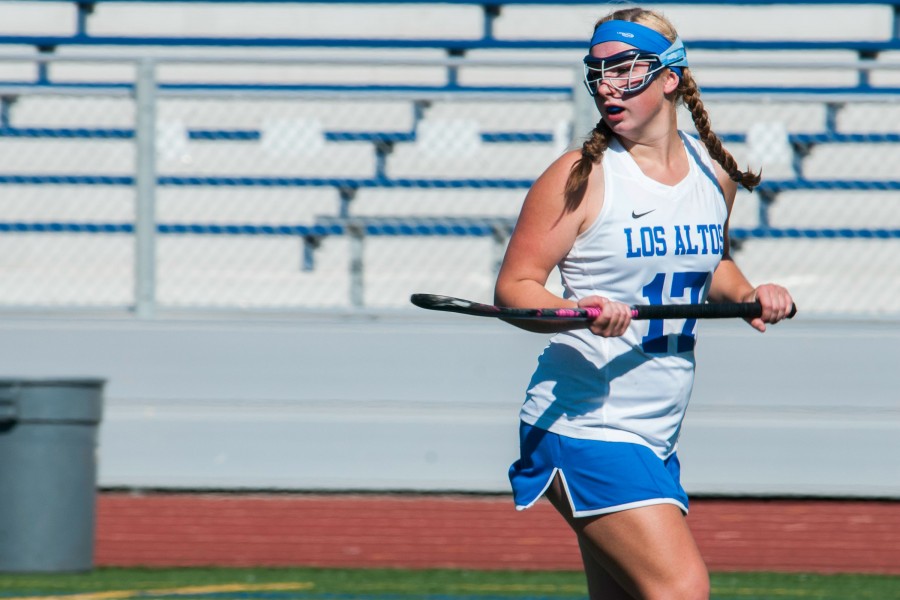 Freshman Karenna Olson watches for the ball. The field hockey team hopes that current challenges will give them good experience for the upcoming season. Photo by Meilin Tsao.

On Wednesday, September 9, the varsity girls field hockey team faced defeat against Archbishop Mitty in the third match of a series of pre-season scrimmages that left the Eagles with a 0-3 record as they move toward the start of their 2015 season. As the final whistle blew, the game came to a close with a 6-0 score in favor of the Monarchs.

And yet, despite the early failure, the team walked away from the game hopeful for the season to come, with their ultimate goal for the year being a run in CCS.

“We have the capability to do that,” senior Angelica D’Augusta said. “We need to put forth a lot of effort and motivation.”

The field hockey team credits this increasing confidence to the amount of effort they put into their summer-break conditioning. Meeting three times a week for two-hour training sessions in the morning, the team underwent workouts that they believe have placed them ahead of their competitors.

“Most of the girls we’re playing against… say that their schools aren’t doing as much conditioning as we are… and we can see the difference,” Angelica said.

Hard work and conditioning was necessitated by the change  last year’s graduation brought to the lineup. The team lost nine players after graduation, forcing many young players into tough situations.

“We had to get a lot of girls from JV to come up and step up to the occasion and… we had to show the JV girls what it’s like to be on varsity and… how to play to that level,” senior Adera Ahern said.

Regardless of the problems that arose from the loss of last season’s seniors, the team was able to bounce back and find strengths among the new team.

“Our team dynamic between the players [is] a lot better because… this year we don’t have any captains and that… makes everyone more equal, in a sense,” senior Patricia Davila said.

A tough conditioning regimen and harsh preseason schedule have pushed the team hard, but the girls believe that the challenge will pay off in the end.

“Our coach has been stacking our preseason games against really hard teams, and I think that’s going to prepare us really well for teams that are actually in our division,” Angelica said.