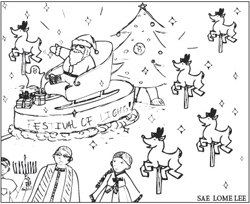 The Los Altos Festival of Lights is every child’s dream: A bright and dazzling hour full of floats laden with glittering snow, striped candy canes, sparkling Christmas Trees and even jolly old Saint Nick himself.

But in a place as diverse as the Bay Area, the parade lacks the multiculturalism needed to truly engage the entire community in a festive celebration of the holidays.

The majority of America celebrates Christmas, which is reflected by the media bombarding the community in Christmas spirit far before the holiday season. However, many underpublicized holidays also exist during the season. Hanukkah, Diwali, Chuseok, Kwanzaa and Zhōng Qiū Jié are just some of the other holidays observed around the same time. Those who celebrate different holidays around this time often feel excluded.

It is hard to ignore the excessive Christmas theme present at the Festival of Lights and the lack of multiculturalism and diversity. Floats feature Christmas icons enveloped in garlands and serenaded by merry Christmas carols.

According to Ed Bridgeman III, President of the Los Altos Festival of Lights Association, the official theme of the parade is “a child’s holiday fantasy.”

Currently, however, almost every element of the parade is a part of the celebration of Christmas.

Some students feel that this is fine and believe the addition of more holidays would only emphasize the religiousness of the parade.

“As a public event that the whole neighborhood is involved in, [it should be kept as] a purely secular and celebratory event,” sophomore Saleil Bhat said.

Although this is a valid point, the diversity of the parade is not only applicable to religion but also to culture. It would be beneficial to represent more diverse traditions in the spirit of celebration.

While individual students cannot participate in the parade, Los Altos as a community should encourage the Festival of Lights Association to include floats representing the seasonal celebrations of all groups.

“It would be great if [the parade] embraced all of the holidays since they all tie in conveniently around the same time of the year,” sophomore Yasmeen Serhan said.

Through the Festival of Lights, Los Altos could unify the community by appreciating and representing all cultures, exposing and educating the community about the diversity of cultures and fascinating celebrations they know little about.