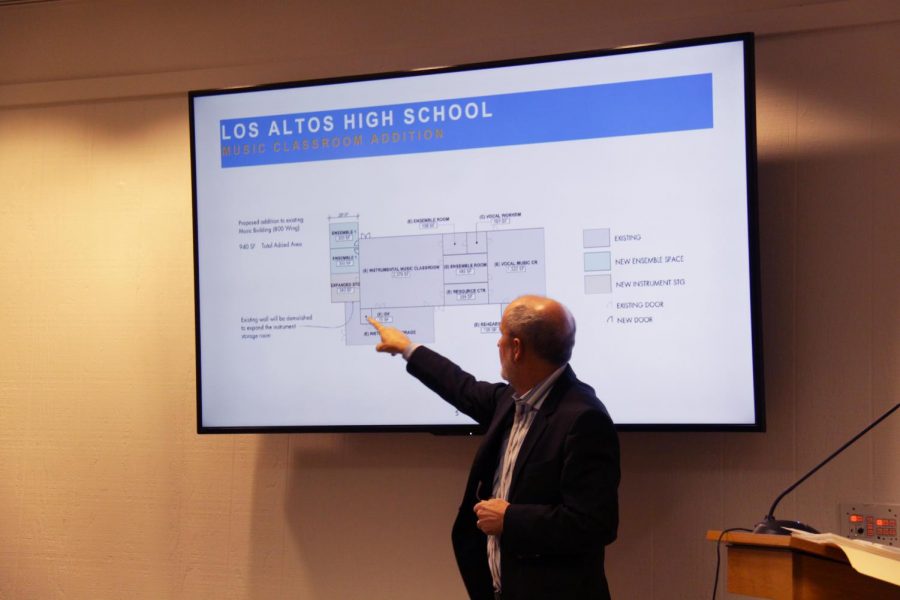 Architect Mark Quattrochi gestures at a diagram of new Los Altos music facilities for the MVLA School Board at yesterday's school board meeting. The school board approved the Facilities Master Plan in a 5-0 vote after adding funds for new ensemble rooms and music storage to cost at most $1,045,000. Alex Wong.

The MVLA School Board yesterday unanimously approved the Facilities Master Plan following a recommendation by architects to add space for music facilities at Los Altos.

The school board delayed voting for the plan on Monday, January 8, after Los Altos parents voiced concerns that the plan did not provide Los Altos proper music facilities compared to Mountain View.

“In terms of music, Mountain View has always been the favorite child,” a Los Altos parent said at the January 8 meeting. “Los Altos’ music facilities are not equal.”

According to the facilities bond budget ranges, the $19 million disparity stems from three key differences between changes to Mountain View and Los Altos:

Parents yesterday thanked the board, district staff and QKA for listening to their concerns and addressing them, and board members thanked community members for their input.

“I especially am grateful for the very high degree of civility with which you expressed your criticisms and the great amount of thought and detail that went into it,” board member Phil Faillace said at yesterday’s meeting. “It really raises the level of what we can accomplish when people approach an issue that way.”

The plan is projected to cost around $295 million, with $30 million of that set aside to be used as needed to build 20 additional classrooms in the district to accommodate student population growth. The board is seeking funding through a public bond measure.