Ezra Tock: dancing through the battlefield 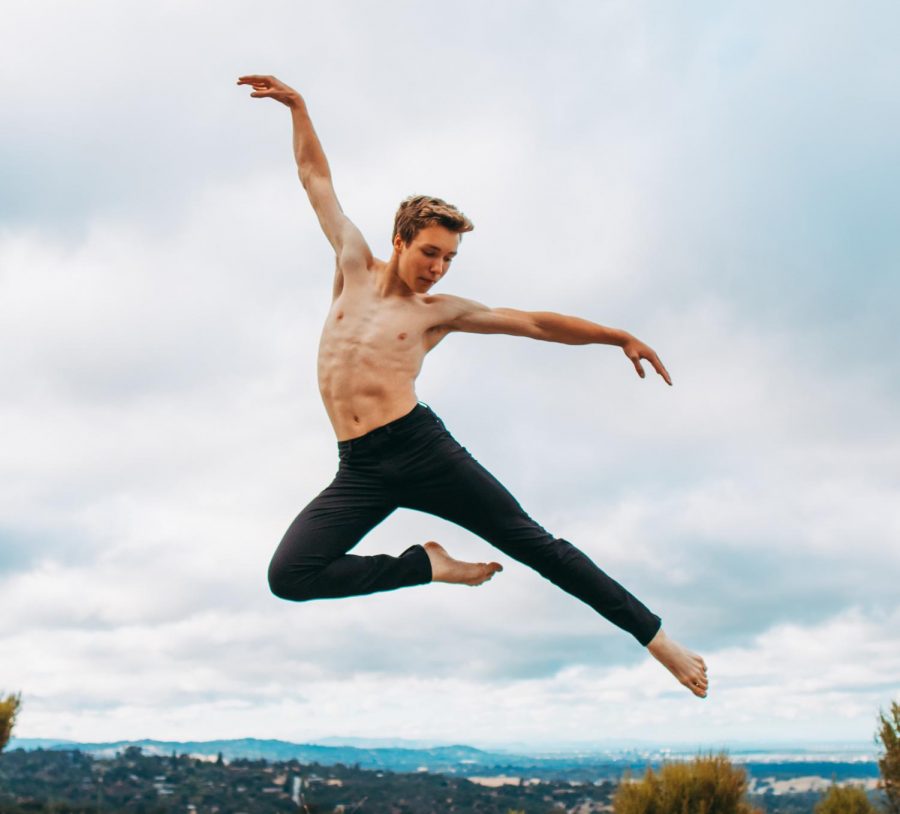 Junior Ezra Tock is one of the only male dancers at Los Altos. Despite being looked down upon by those who believe masculinity and ballet do not mesh with one another, Ezra continues to dance proudly and master his craft.

“Weak. Feminine. Gay.” These are just a couple of the adjectives that plague male ballet dancers. It’s something that makes dancing for boys both difficult and rare. Despite being one of the few male dancers in Los Altos, junior Ezra Tock continues to dance proudly, not as the stigmatized ballerino many people have in mind, but rather as a normal guy expressing himself through artwork.

In a sixth-grade phase of self-discovery marked by numerous new activities, Ezra started doing jazz–hip hop on the Graham Middle School dance team. To this day, he continues to practice 12 to 15 hours a week, now dancing competitively at San Juan Dance. In particular, he likes contemporary dance, but he also works on other styles including lyrical, ballet, jazz and acrobatics.

“I think it’s just something innate about myself,” Ezra said. “I need to move my body every time I hear music, and it was cool to control that power into a sport that was aesthetically pleasing to an audience.”

The journey hasn’t been easy, though. Despite living in what most would consider to be an inclusive, sheltered community, Ezra has experienced a lot of bullying.

“There’s a lot of derogatory insults,” Ezra said. “I get called ‘gay,’ ‘f*gg*t’ or ‘homosexual’ a lot. There’s also this stereotype that male dancers are really weak or pathetic.”

Despite being bombarded with comments by those who believe that heterosexuality and dancing are mutually exclusive matters, Ezra defies this stereotype by being a straight male dancer. Still, in today’s age of constant comparison on social media, these stereotypes have only been intensified by current dance trends.

“I think that because dancing, especially in this era, is very flaunty, it’s become very feminine,” Ezra said. “There’s modern dancing and jazz with a lot of hip movement, and it’s more just for the Instagram.”

In reality, though, that’s only one facet of dance that doesn’t accurately represent the amount of strength and training going into the art.

“I definitely see my dancing as very masculine,” Ezra said. “It’s very grandiose and showy, like, ‘Here I am. I’m big and strong.’ There’s just a lot of power, calm and control in dancing.”

“Weak” is also a word that doesn’t apply to dance at all. According to Ezra, male dancers do several cardio workouts to make sure that on stage, they can lift ballerinas above their heads with ease.

“Try it yourself,” Ezra said. “It is so hard, despite what people think.”

This physicality is also not just specific to dance; it’s a general athleticism that helps on all fronts. Being a soccer player as well, Ezra has seen a lot of the training in dance help with his soccer skills, and vice versa.

“When I came into dance with a soccer background, it really, really helped me because I already had a lot of leg strength,” Ezra said. “After doing dance, my soccer also improved, because I had this agility and I had better instincts.”

One of the main contributors to these stereotypes is the fact that people just don’t know enough about dance. The professional dance world is an example of this: According to Ezra, all of the stereotypes stop at the front doors of dance studios and theaters, where all dancers, regardless of gender and sexuality, support and empower each other. As such, just seeing Ezra dance has had a profound impact on many people’s mindsets.

“Once people see me dance, I feel like they can connect with it more,” Ezra said. “They really know what dance is instead of having this image of, ‘Oh, you’re just a ballet dancer; you’re gay.’ I think that makes a big difference.”

That difference is crucial, as the people who do understand view Ezra in a completely different light.

“There’s also a lot of people who see greatness in dancing as a man,” Ezra said. “And they think it’s cool that I’m going against what’s stereotypical.”

In the future, Ezra hopes to teach dance on the side, spreading the joy that he’s gained from it himself.

Because, as cliché as it sounds, these challenges have only made Ezra stronger, and not just physically.

“They give me something to dance about,” Ezra said. “Dancing is a lot about portraying a story and showing emotion. But at the same time, dance has [helped] me not care about other people’s opinions. I’m just going to own it. If it’s something I enjoy, then why would I listen to anyone else?”