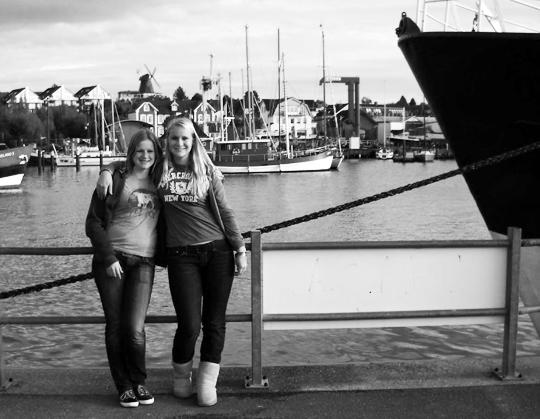 Junior Christine Silver stands with her cousin at the harbor outside her house in Kiel, Germany, where she spent a semester abroad.

“What if I can’t express my humor in German?”

For junior Christine Silver, this was a major concern before she decided to spend a semester abroad.

After visiting her grandparents in July, Christine decided to stay and spend the first semester of the school year in the city of Kiel, Germany. There, she attended Gymnasium, the secondary school system for mainly university-bound students.

Christine had lived in America her whole life, so she wanted to get away from some of the drama and stress she dealt with in America.

“I really wanted to away from it all,” Christine said. “I wanted to break free.”

The decision to stay in Germany for a semester was not easy for her.

“I was excited to meet new people, but at the same time … I was afraid to be away from my friends and leave my comfort zone,” Christine said.

Christine said that although she was fluent in German, she still needed to practice reading and writing over the summer. Her German needed to be very good since she would be studying a wide range of subjects at once, from Spanish to trigonometry.

“Everything we do here throughout the four years, they do all at the same time,” Christine said. “You just have [each] class once a week.”

Even though Christine said people only realized she was American after she told them, there was still a “huge culture shock” for her.

“The German people in general, and I don’t want to generalize them, are not as open as Americans,” Christine said. “So it took me longer to make friends.”

Socially, there were different standards too. For one, alcohol was regarded very differently.

“Not a lot of people got drunk there like they do here,” Christine said. “It was more casual, more mature. If we wanted to, we could easily have a beer with our dinner, and we wouldn’t have to worry about hiding it.”

Instead of the archetypal California house party, partying in Germany was more mature.

“Everyone would go to a club— on a bus,” Christine added. “You’d have to be 16 to in, but there were 40-year-olds there too. … You could have beer, wine and champagne, but no hard liquor until you’re 18.”

But during all the good times, Christine said she missed her friends, parents and sister.

“I would talk to my mom every single day, and my sister and I would Skype on the weekends,” Christine said.

Christine feels that despite all of the difficulties and changes she went through, she would definitely recommend this type of experience to other people.

“I definitely matured,” Christine said. “I basically had to live on my own in a different country and learn a language by myself. … It really shows you who you are.”

Coming back to California was also a difficult adjustment for Christine.

“Everything was really different— my friends had all changed,” Christine said. “I guess it’s just junior year, and there’s a lot more independence. I got used to it after a week, but the first week I was like, ‘Ugh, bring me back to Germany—I just want a peaceful life.’”

While she misses her family, friends and the food in Germany, Kiel is never far from Christine’s heart.

“I feel like when I’m here, I’m German, and when I’m there, I’m American,” Christine said.

While for now she plans on just visiting Germany every summer, a long-term future in Germany is still on the table for Christine. “I might even go to university there,” Christine said. “I know it will be hard, but I like challenges.” So what about the challenge of expressing her humor in German? “Yeah,” she laughed. “I figured it out eventually.”