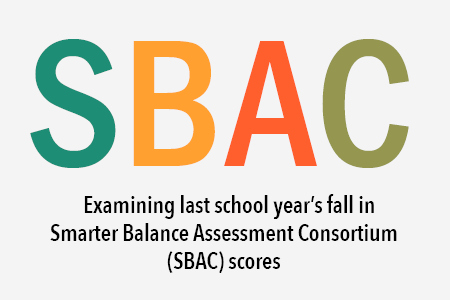 Out of the district’s 17 measures of student academic success, the SBAC was the only one that showed a decline in performance. The proportion of students who met or passed state expectations at Los Altos dropped from 81 to 70 percent and 76 to 67 percent in English language arts and math, respectively.

The results confounded Director of Assessment and Accountability Brigitte Sarraf and Instructional Support Team coordinator Joy Hellman, especially since they thought a higher participation rate would mean higher scores. Los Altos and Mountain View tested 93 percent of students last year, up from 83 percent two years ago. Sarraf reasoned that with a greater proportion of AP students taking the test, scores would increase.

ge percentage of the students who opted out [in 2015] were our AP students,” Sarraf said. “So that fact alone led us to believe that if we get these kids to tak
e this test and take it seriously, our scores should have gone up, but they didn’t.”

Sarraf and Hellman hypothesized potential factors that could have decreased scores, which included technical difficulties, the testing schedule and students not taking the test seriously.

On Monday, October 24, the MVLA School Board met for a study session to compile the SBAC demographic data and discuss initial feedback from teachers and students. At the meeting, Sarraf concluded that even after looking through data, results were inconclusive.
Changes
After analyzing the survey results, the district decided it will administer the SBAC assessment the week after spring break in April. Juniors will have regular classes on Monday, and testing will take place Tuesday through Thursday on special block day schedules. Last year, students took the exam a week before finals on a regular schedule.

“Two years ago we did better than we did last year, and we had a special testing schedule,” Assistant Principal Galen Rosenberg said. “[We’re making changes] based on the input that we got from taking the survey and from discussions we had with teachers here and at Mountain View about what appears to be the best decision.”

The district plans to learn from the last two years of testing by addressing concerns over preparation. Teachers will introduce SBAC Interim Assessment Blocks (IABs), which are tests that take the same format and cover the same content as the SBAC. Students of all grade levels will take the test, as Los Altos offers many classes with students of mixed grade levels.

“We’re planning on taking the 16 IABs that exist and dividing them up into courses and departments,” Rosenberg said. “Most teachers [believe] that time [spent] on those IABs is not just test preparation, but [that] it is actually a worthwhile content learning experience for students in that class, which is really the goal.”

The district also aims to send a clear message about the benefits of doing well on the exam, which include placement into higher-level California State University math and English classes.

“A big part of it is simply [to have] teachers talking more about the benefits and importance of [the test],” Rosenberg said.

To motivate students to try their best, the district is considering putting SBAC scores on students’ transcripts. Although some believe the change would increase student stress, Rosenberg believes this decision would benefit students.

“The only consensus among students was that ‘I would try harder if [the score] was on my transcript,’” Rosenberg said. “At least for our college-bound students, they are all going to get at least proficient, and if it motivates them to work hard enough to turn proficient to advanced, then that’s good for them.”

However, students voiced concern about the possible inclusion of SBAC scores on transcripts.

“I think putting [SBAC scores] on transcripts is a double-edged sword in a sense that some students will try harder, but it also puts more pressure on students who are otherwise stressed because of AP tests,” senior Angela Chen said. “Junior year is already a very stressful time in general, and this could potentially stress out students more considering the timing [two weeks] before AP tests.” 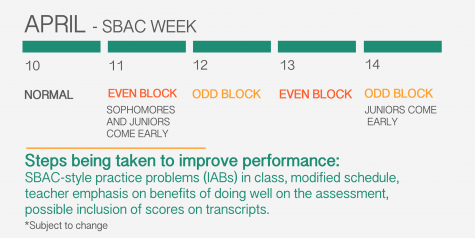 many students believe the schedule changes and additional practice activities that will be implemented this year will be beneficial for students’ test taking.

“I think the changes are good,” senior Ethan Lowell said. “Making the test feel more important is probably the key to motivating more students, and the practice problems will likely prepare students better so they can demonstrate their knowledge.”