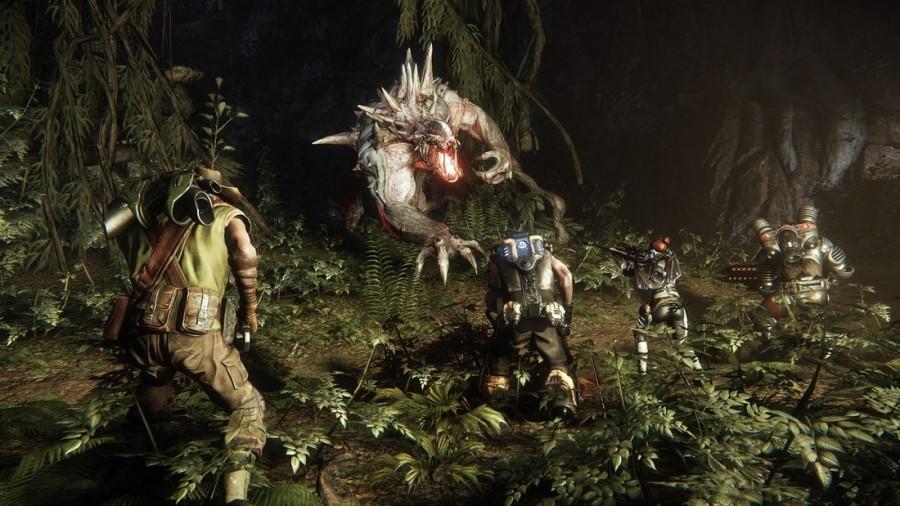 Evolve is the latest thriller from Turtle Rock Studios.

Developed by Turtle Rock Studios, the studio behind the hit game “Left 4 Dead,” “Evolve” reinvents the old concept of asymmetrical shooters. The game pits four human hunters against one player-controlled, colossal beast. From the exhilarating chase to the inescapable final clash, “Evolve” is as clever as it is thrilling.

In contrast to many present-day first-person shooters, “Evolve” offers a fresh take on this overly done and often repetitive video game genre. When playing as a hunter, the job is to track, find and kill the beast. If, however, one feels like crushing puny humans as a hulking behemoth, playing as the monster can satisfy this desire, as the job is now to evade, eat, evolve and kill.

The hunt occurs on Shear, a planet where rampaging monstrosities have halted human colonization and fostered a perfect playground for any adrenaline-fueled hunter willing to fight. As for the look of the planet, Shear’s superb graphics are as to be expected of a AAA game of 2015. AAA games, pronounced “Triple A,” have the highest development budgets of any video games and are expected to be of the best quality that current gaming technology has to offer. Despite this, however, if the player isn’t familiar with the launch maps, navigating the visually similar terrain starts to feel monotonous.

Teams are composed of four different hunters: Trapper, Assault, Support and Medic. Each class has a special set of skills, weapons and playstyles to toy with. The Trapper’s job is to track the monster using tactics such as tracker darts or an alien dog monster named Daisy, all while the Assault fires volley after volley of bullets into the beast. This is a game of coordination and cooperation. If the team wants to succeed, each member must work together.

Due to the team-reliant nature of the game, Evolve is most fun when active forms of communication are established through channels like Skype, TeamSpeak, or other online call services. Communication is key for the hunters and having teammates in a call where the players can discuss the next move makes coordinating attacks much easier. Sniper shots and orbital strikes hit their target much more frequently when the player knows when and how the team is going to lock down the monster.

Currently, the game includes three playable monsters: the raging Goliath, the flying Kraken, and the cunning Wraith. The Goliath is the only monster available at the start, but players can unlock the Kraken and Wraith by playing and winning games as the monster. After getting a feel for the slightly awkward third person controls, these terrors are extremely fun to direct. Each has its own feel and playstyle; the Wraith is quick and sneaky while the Goliath is massive and breaths fire.

The monster is not the only thing the hunters need to worry about. Scattered through each map are similar monsters roaming or waiting to snack on the hunters. The monster can eat these beastlings in an attempt to evolve, or the hunters can kill them for temporary buffs.

Combat is intense in “Evolve” and rarely leaves hearts beating at the same pace as when the fight started. The battles are fast-paced and constantly shifting. The monster will smash past the hunter’s shields as they retreat, but a quick heal from the Medic allows the team to regroup and gain the upper hand, as the beast is forced to fall back to cover.

“Evolve” is action packed, and the buildup to combat is intense. For the first few minutes, the game is simply a chase between the hunters and the monster. The monster must be constantly vigilant as he sneaks around the landscape avoiding hunters and eating wildlife to evolve to the next stage for bonus health and armor. For the hunters, footprints and startled birds lead the way to the monster, and the feeling of being watched always lurks in the back of the mind.

The game has no campaign and gives very little in the form of backstory.  Players get tidbits of information from the in-game banter between the hunters, but little else. Turtle Rock missed a huge opportunity for creating interesting and completely fleshed out characters. All the hunters already have great personalities, but getting some insight of how and why they arrived at Shear could greatly improve the relationship between player and character. Adding to the list of missed opportunities, solo mode is simply multiplayer with computer controlled players. As with any online game, playing with real people adds a level of depth that can’t be replicated with artificial intelligence.

After being in the pipeline for four years, “Evolve” accomplishes exactly what it set out to do: create a game that pits four players versus one in a fair fight each time. While the developers missed a few opportunities to make the game even better, the core concept is something gamers have never experienced before. Each hunt brings new experiences and excitement enough to bring players back game after game.