Everything You Need To Know About Political Parties

“Politics are messy.” The age-old aphorism has never been more applicable than it is today, as the American political landscape of the past few years has little resembled anything professional or even efficient. Dissatisfaction with the Obama administration, intense and often fruitless debate within Congress and most recently a self-imposed shutdown have turned the rivalry between Democrats and Republicans into something bitter and, as US history teacher Michael Messner describes, “[uglier than] anything I’ve ever seen.”

But how did we get here? What forces have worked to create the unparalleled tension, stalemate and spirit of partisanship that so characterizes current perceptions of both parties? A look into recent trends in Democrat and Republican camps can help us better understand where both parties’ motivations come from and better determine where our country is heading.

Among controversial issues, both parties in the House and in the Senate refuse to give ground and have made little in the way of progress. Perhaps no key issue is more heavily argued than healthcare. Earlier this year, a government shutdown occurred as a result of this issue. While the Democratic party fought for the existence of Obamacare (see definition in list of key terms), some Republicans vigorously opposed it, deeming it too costly for the country and overreaching by the federal government. This led to a government shutdown that lasted for 16 days.

Despite the dysfunction among the two largest parties, there has been no threat of a third party rising to power. The other major parties of the U.S., the Libertarian, Green and Constitution parties, together, hold only one House seat at the state or national level.

The Libertarian party was founded in 1971, prompted by concerns over the Vietnam draft and the end of the Gold Standard. The party has since been described as socially liberal, but fiscally conservative. It is also the fastest growing party in the country, according to American Government and Politics Today. Founded in 1991, the Green party’s ideology consists of an emphasis on environmentalism, non-violence, equality and diversity. The party lacks real representation on a federal level; it does not hold any seats in the House or the Senate and, on a state level, holds only one seat in the Arkansas House of Representatives. The Constitution party emphasizes the principles of the country’s founding documents, promoting conservative issues such as a stricter immigration policy and non-interventionist foreign policy.

Though no party looks to upset either of the major parties, in recent years a movement known as the Tea Party has emerged to potentially split the Republican base. The fiscally conservative organization has gained national attention for its no-compromise advocacy of reduced taxes and government spending. Most of the Tea Party is united in its disapproval of those in office, although almost all Tea Party members are registered Republicans. In light of the party’s popularity among dissatisfied voters, Republican leaders have come under pressure to strike a balance between moderate conservatism and the Tea Party’s hard line stance.

As voters make their decisions on political parties and important legal issues, they turn to media for knowledge. Ironically, for many voters, modern resources and the availability of information can make it easier to stay uninformed.

“The people who are very conservative, they listen to Rush…If you are a liberal democrat…you listen to Stephanie Miller and Rachel Maddow,” Messner said. “That’s fine—but they’re going to tell you just what you believed in the first place, for the most part. If you really want to become well informed you need to look at things across the spectrum.”

The ultimate question seems to be: Is there any cause that will bring these two sides together? The most obvious candidate would be the $17.078 trillion debt that the United States has accumulated. According to Messner, solutions to the debt problem are limited.

Even if legislators were able to freeze all U.S. spending immediately, the issue of where to raise the necessary $17 trillion would remain.

“Realistically, this will only happen if politicians of both parties learn to work together and fulfill the purpose they were elected for in the first place: to serve their country and not themselves,” Messner said. 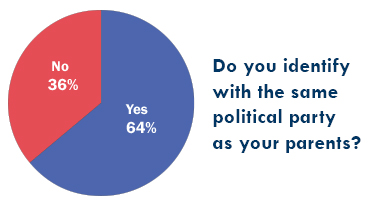