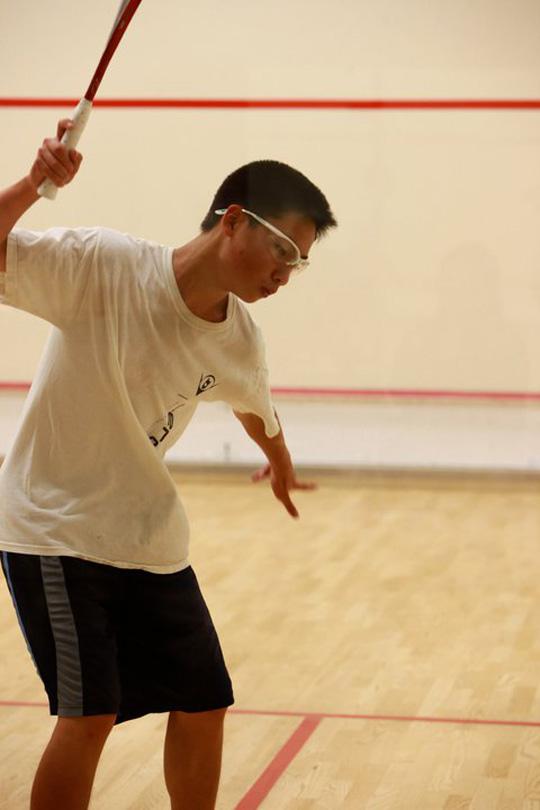 Junior Ethan Ming plays two indoor sports with a racquet. However, although he is proficient at and is a member of the school’s badminton team, he really stars in squash. A relatively unknown sport, Ethan walks around campus as the 111th out of 605 nationally ranked squash player in the boys under-19 age group.

Ethan began playing the game when he was 11 years old. His father and brother also play squash.

“My younger brother will be a freshman next year, and he is extremely competitive,” Ethan said. “He plays at a higher level than me and is ranked in the top 10 of his age group (BU15).”

Squash is a sport involving a room surrounded by four walls, one of which is made of glass for the audience to view the game. Two players take turns smashing the ball against the walls.

Only the server can win points, and the opponent must score to gain the serve, and then score once more to win a point. Opponents play up to nine points.
However, this fundamental description can not possibly describe the intensity and strategy of the sport.

“It’s all about thinking ahead,” Ethan said. “[During the game], I’m thinking about how good my opponent’s return might be… How fast I can attack the ball depends on how good their shot is.”

As an opponent’s shot comes screaming at him, Ethan must turn those thoughts into swift action, which can take a heavy toll on the body. In fact, Ethan can expect to burn up to 1000 calories in an hour of squash.

“You have to be really fit aerobically, because rallies are really intense,” Ethan said. “You’ll hit shots up and down [the court], wait until the person makes a mistake, and jump on it to try to attack their bad shot.”

However, since the rallies can “go on for a while,” Ethan must combat both the mental and physical drain, which makes it more likely that he’ll be the one to make the mistake.

“If it goes on for a while I get tired, I get less patient,” Ethan said. “If you’re too anxious you make mistakes like trying to attack the ball when it’s the wrong opportunity, or playing shots that aren’t right.”

The complexity of factors inherent in squash can lead to extreme frustration for Ethan when the ball doesn’t bounce his way.

“I have a pretty short temper sometimes and depending on how much I’m into the game, I’ll start cursing or screaming really loudly on the court,” Ethan said.

“I set really high expectations for myself … and I usually don’t play as well as I want to, so I often lose my temper on court.”

But by sticking through tough times in squash, Ethan was also able to experience some surprisingly thrilling matches.

“I won a match against my friend whom I usually don’t beat because he puked, ran off court and was disqualified,” Ethan said. “He was one point away from winning the entire match.”

While playing squash, Ethan enjoys not only the competitiveness, but also the feeling of hitting a successful shot.

Though the sport is obscure, Ethan describes Squash’s uniqueness as a plus.

In the future, Ethan plans to continue playing squash for the “health benefits, if not competitively.”