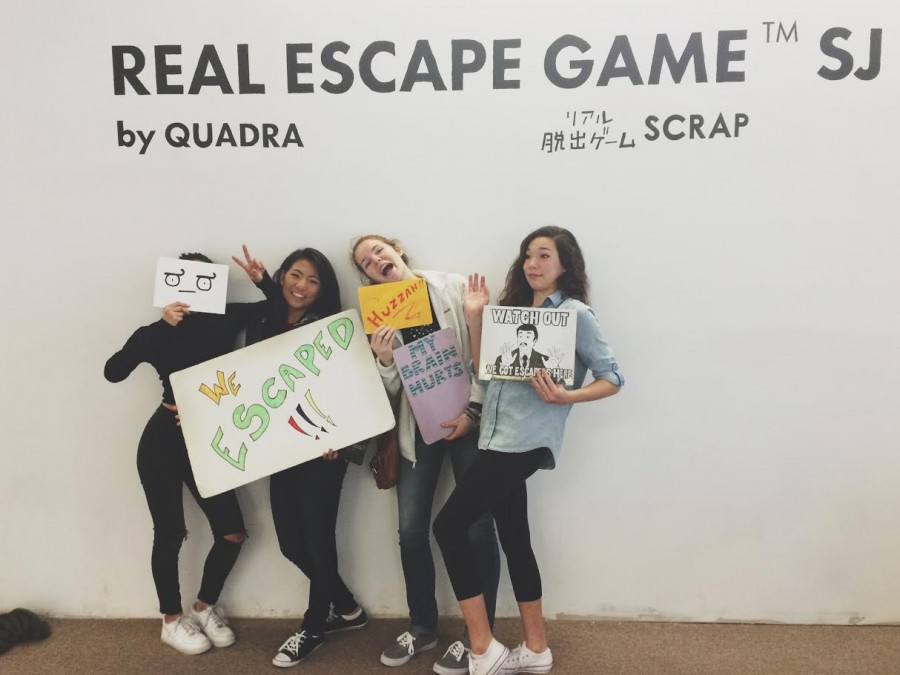 Panic. Yells diffuse through tense air, hands flail, feet shuffle nervously. Three, two, one… time’s up, and the room explodes in laughter and noise. Escape the Room games are paid, timed experiences in which the players are trapped in a room full of puzzles. They are exactly what they sound like: the ultimate goal of the game is to find the key to escape the room. That said, even without succeeding, participants will enjoy the one hour mental exhilaration.

There are multiple locations across the Bay Area, namely in San Jose and San Francisco; each location has different themed rooms. A common misconception is that Escape the Room games are all horror themed. But all manner of themes are available, from time travel to cats and everything in between. Parties book tickets online in advance, which generally cost around $30 per person for an hour of gameplay. 11 people are allotted per session, so be ready to meet new friends; other smaller Escape the Room companies allow small group bookings for those who prefer more intimate settings. Though a bit pricey, those who allow themselves to become absorbed in the game will feel their money is completely worth it because of its mental exercises, teamwork and intense, focused tension.

At the location, we were greeted by a Master of Ceremonies, who explained the rules of the game (in short: don’t break anything or stick your fingers in electrical sockets). At this point, groups with strangers would be introduced to each other, but since no one aside from my friends and I happened to book the same time slot, I already knew all of my teammates. There was a brief description of the fictional context of the room being locked, the elements of the room were introduced and the door was locked behind us.

In the room stood an employee playfully dubbed the “Spirit,” who ensured that customers abide by the rules and provided hints to keep the game from hitting a standstill. Every ten minutes, an ominous voice announced the time passed or time left. Other than the Spirit, we were alone with a mysterious room, a complex puzzle and our wits.

Escape the Room is a great bonding experience for friends, family and/or coworkers. It is mentally challenging, but not to the extent of being overwhelming. The main challenge is solving the puzzles under the one hour time limit, not the puzzles themselves. The Spirit was adept at giving strategically vague yet helpful hints, which kept the game rolling when we were stumped. Escape the Room requires out-of-the-box thinking and a meticulous eye for clues. Designed to appeal to all kinds of different thinkers and skill sets, the room included a variety of logic, word and visual-spatial puzzles which all culminated in finding the key to the door. And for those who just aren’t puzzle people, the largest component of the game is physically looking for hidden clues. The room needs to be carefully deconstructed, bit by bit — furniture taken apart, rugs removed — in order for all the clues to be revealed. Everything and anything could be a piece of the puzzle, from looking beneath drawers for hidden compartments to flipping clothing inside out.

One of the largest aspects of Escape the Room is teamwork. With a group of close friends or family, this aspect comes easily, but it is highly likely that you will be working with at least a few other strangers. For the extroverted natural leader, the game requires a fair amount of coordination between players and organization of new clues and puzzle answers. For those who aren’t particularly social but are in it for the mental workout, puzzles can be completed individually and given to the group to put together.

The entire atmosphere of the game was one of concentrated tension and intense focus mixed with a consistently delirious, grin-inducing euphoria whenever a puzzle was solved. Especially during the last few minutes, there was a constant cacophony of excited yelling and frantic pacing, which made the end of the game all the more exciting. Actually succeeding and escaping the room was a feeling of achievement comparable to winning a Nobel Prize. The success rate is relatively low, some as low as 7 percent, so getting out felt like the accomplishment of a lifetime, especially given the amount of effort and focus the hour entailed. For the groups who don’t escape, there are consolation high fives and hugs and an explanation of how the room would have been solved. Despite failing, the participants will find the hour an engaging experience nonetheless.

Overall, Escape the Room is a memorable experience that will be the highlight of everyone’s week, without exaggeration. Instead of sitting and binging on Netflix all weekend, do something fun, exhilarating and physically and mentally active. Pay some money, lock yourself in a room and tear your eyes away from your phone to use them on a puzzle.