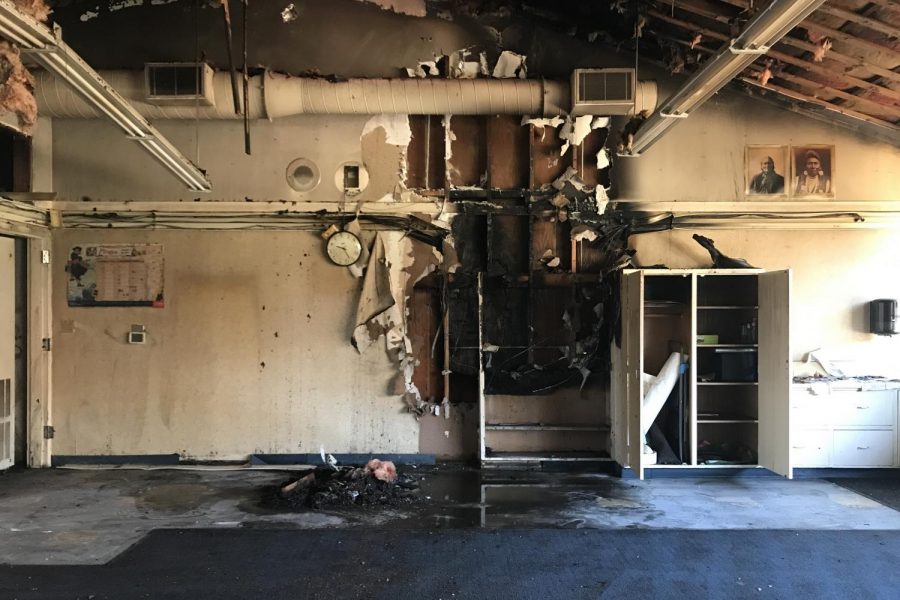 A fire at Egan Junior High School last weekend almost destroyed an entire classroom after a boarding locker caught flames, resulting in the demolition of an entire wall by the fire department to contain the blaze.

Unknown individuals came to the school and began lighting objects on fire, Principal Keith Rocha said, citing physical evidence found at the scene. They took the lit items and placed them in an open locker that bordered room 22 before closing the locker. Over a series of several hours, the locker began to smolder, causing the back of the classroom to catch fire. The roof caught fire, and its highly flammable insulation burned down parts of the ceiling.

“The classroom is a total loss,” Rocha said. “The back of the classroom is completely shredded, ripped to pieces because the firefighters had to go back in and rip off the walls to make sure nothing else burned inside.”

The fire knocked out all electricity in that wing, shut down Wi-Fi and forced teachers in four classrooms to relocate. The electricity will not be fixed for at least two more weeks. Egan is still searching for the identities of the arsonists and assessing the extent of the damage.

“Everything is kind of up in the air a little bit because of that other classroom being almost a total loss really, it’s going to take a really long time to [rebuild the room],” Rocha said. “You have to get the insurance, people to come out take a look at that, assess the damage, figure out what you need to repair.”

“He’s been teaching for around 20 years, so a lot of his stuff from Michigan [where he is from,] his students’ work and a few baseball posters [burned down],” seventh-grade student Harini Nagappan said.

The Santa Clara County Fire Department is offering a $10,000 reward to anyone who can provide information that leads to arrest and conviction.

“The teachers are working with each other really well to make sure everyone is supported and supporting the affected teacher,” Rocha said. “All the kids get to still be engaged in positive learning here. We’re just hoping that whoever was involved or if people know anything to contact the police or contact us.”