Editorial: We have to curb LAHS’s traffic issue 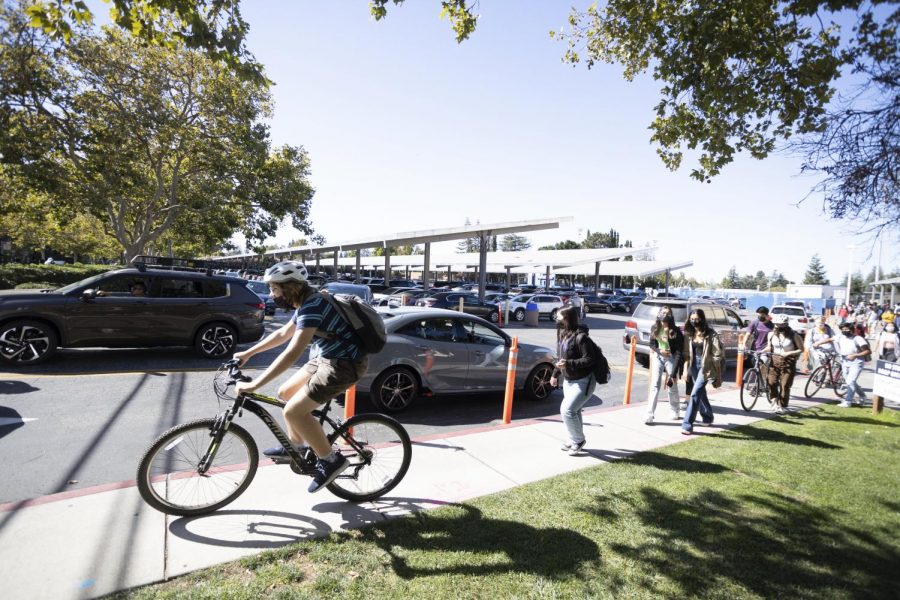 Traffic coming out of Los Altos High School is chaotic.

By The Editorial Board

After 18 months of relative calm, Los Altos High School’s hazardous morning traffic has come roaring back, teeming with flagrant violations of regulations and reckless behavior. Alongside the return to in-person instruction, the influx in traffic has been aggravated by construction that spans much of the campus and bottlenecks students into overcrowded entrances.

The construction on the athletic fields is slated to be completed on Monday, November 15, according to Associate Superintendent of Business Services Mike Mathiesen, which will likely be followed by a reduction in traffic, as other entrances to the campus reopen. The new building will sit on the site of the old parking lot, but new parking will open near the 900s.

But until then, the Los Altos community needs to work together in order to ensure the safety of all students commuting to and from campus.

Despite numerous warnings from the school, drivers consistently pull into the bicycle lane to drop off students, cutting off student bikers and increasing the risk of collision. And, also turning a blind eye to regulations, drivers continue to clog the student parking lot by using it as a drop off zone.

On public streets, the administration does not have the jurisdiction to penalize drivers; that duty falls on the Los Altos Police Department, which has been citing violators. Yet it hasn’t curbed the traffic infractions, according to Assistant Principal Galen Rosenberg.

But we shouldn’t have to rely on the police or the school for this — it’s common courtesy. If you’re going to get dropped off at school, then park a few blocks away and take the extra three minutes to walk to school. Punctuality is important — but not more so than safety.

The limited number of entrances and closure of the teacher parking lot have also burdened certain bike racks near the front of the school and the baseball courts.

Because the nearest bike racks are taken, students often attach their bikes to poles or other structures in order to get to class on time. But this compromises the structural integrity of buildings, Rosenberg said, so administrators have been putting padlocks on the spokes of bikes not parked properly. These infractions are recorded on students’ disciplinary records through Aeries, although they’re not shared with colleges. Only counselors and administrators can see these infractions.

“Depending on what you’re locking your bike to, you could be damaging the structure or creating an obstruction somewhere — you could be scratching the paint on a pole, or blocking a pathway,” Rosenberg said. “If you have a rule you have to draw the line somewhere. We have to be consistent and clear. We can’t be too lenient because then eventually there is no concept of following the rules.”

In most of the cases where the school locks a student’s bike because it was improper parking, the student was been running precariously close to being late. The solution is simple: Get to school earlier or be tardy. It’s not an impossible request.

Still, it is frustrating for students whose bikes have been locked, especially students who have to stay after school for athletics. Multiple students have been unable to take the locks off their bikes after practices ended — by which point most administrators have left campus — and had to walk or bike unsafely to get home. LAHS custodial staff should be equipped with keys to these locks, so that students can safely get home.

But the school’s hands are tied too: There isn’t any other way to enforce the rules, which exist for good reason.

This isn’t about finicky regulations, but it also isn’t about reckless teenagers; it’s about safety, plain and simple. Administrators should give students a bit more leeway with parking their bikes, at least until construction ends, and students should do their best to follow guidances — even if it means being a couple minutes late to class.

Please, let’s work together — before an accident happens.