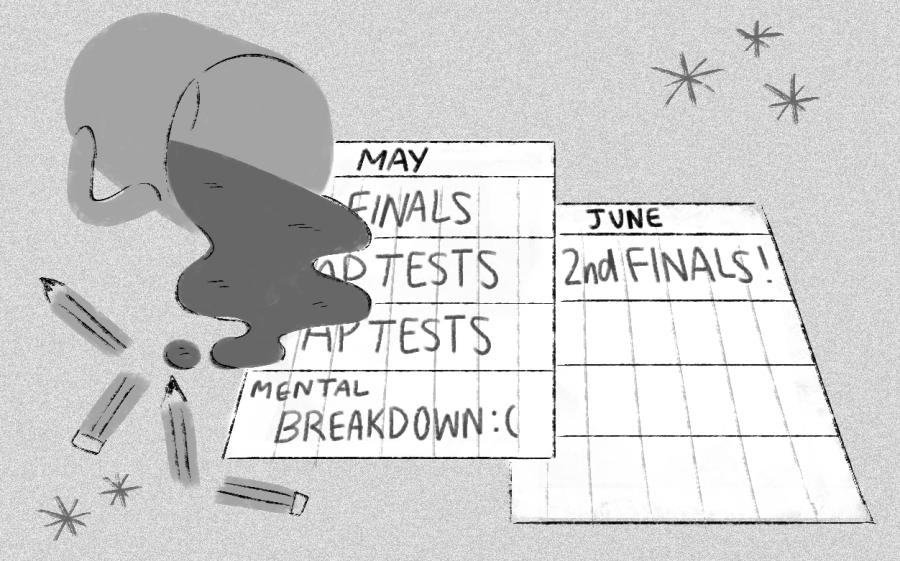 In an effort to reduce student stress, the school administration strongly discourages AP classes from holding final exams prior to the AP test rather than during the official spring finals week. Many AP teachers still choose to give early finals anyway because there isn’t an explicit ban on doing so. However, those who administer finals before AP testing are still required to evaluate students during their scheduled finals periods using a graded educational assessment or project of their choosing.

It’s the vagueness of the current policy that makes it seem somewhat fair, as teachers are allowed to pick what to do with their students once AP exams are over. But in reality, this condition is more problematic than helpful, and AP students shouldn’t have to worry at all about taking another test.

Forcing teachers to further test students just for the sake of having an educational activity on finals day does nothing to alleviate stress. If anything, it actually worsens it because students will continue to worry for the next several weeks after AP testing knowing that their grade may still be in jeopardy.

More importantly, however, it’s simply redundant to have another assessment based on past knowledge after the AP test. The argument against early finals is that it inconveniences teachers on different timelines by encouraging students to neglect all other classwork in favor of studying for their finals. But the point of having cumulative finals before rather than after AP exams is to help students meet the high-level standards expected of successful test-takers. For this reason, most AP teachers who choose to have their finals before the AP test design them like practice AP tests in an effort to provide extra study tools. Still, that’s not to say that AP classes are just supposed to prepare students for a standardized test—that’s certainly one function of the curriculum, but it isn’t the only one. The “AP” label doesn’t change the fact that, at their core, AP classes are just typical advanced classes meant to provide greater enrichment for students looking to learn more about what they’re interested in.

Thus, the school policy regarding semester AP finals should reflect this duality. Right now, it promotes the educational aspect of AP classes by encouraging repeated testing for mastery. However, it ignores the fact that AP classes are also structured around AP tests. It’s fair to have a mock AP exam as a final prior to the AP test, but having one afterwards just seems unreasonable.

One promising solution is to give students up to two chances to achieve a satisfactory grade on their finals: one during a mandatory sitting of a final exam administered before the AP test, and another during an optional “retake” sitting administered during the official spring finals week. This way, those who want to try for a better score have the opportunity to do so while those who are content with their grade can leave it as is. And for those concerned about cheating during the retake, it’s simply a matter of strategic proctoring: teachers can create a new test version with altered question-answer pairs, require students to turn in all cellular devices and separate retake testers while the rest of the class works on other educational activities.

In the “limbo” time in between the mandatory sitting and the retake, it’s completely fair to expect AP students to participate in other classwork. If anything, free-form projects about different AP-related concepts are more ideal than continued testing because it allows for greater exploration and enrichment in a given field. Plus, creative, non-conventional teaching methods can be more effective than traditional testing because they’re more likely to engage and excite students about new content.

It’s true that this solution still advocates for post-AP-exam testing, but the difference between this and the current policy is that there’s a reason for giving additional assessments, one that’s arguably more substantial than just an educational time-filler. What’s more, the outcome of final semester grades ultimately becomes a student responsibility rather than a teacher one. With two fair chances and ample time in between to prepare for a retake, students have no excuse to blame their bad grades on their teachers. The intensity of the stress that accompanies this testing is also entirely within student control, as it depends solely on whether or not they decide to opt for the retake. Of course, there’s bound to be some students who believe that not even a second chance is enough—but no compromise is without its own share of sacrifices, and the price of this solution certainly isn’t as steep as that of the current policy.

In short, although the leniency of the present policy allows for greater flexibility in AP teacher direction, it’s clear that more nuance is needed. A broad umbrella policy like this can’t address everything to the full extent necessary to ensure a healthy balance between challenging, stimulating academics and good teen mental health. Given that our school has dedicated itself to encouraging positive wellness, improving this policy would only further strengthen that commitment for the better.