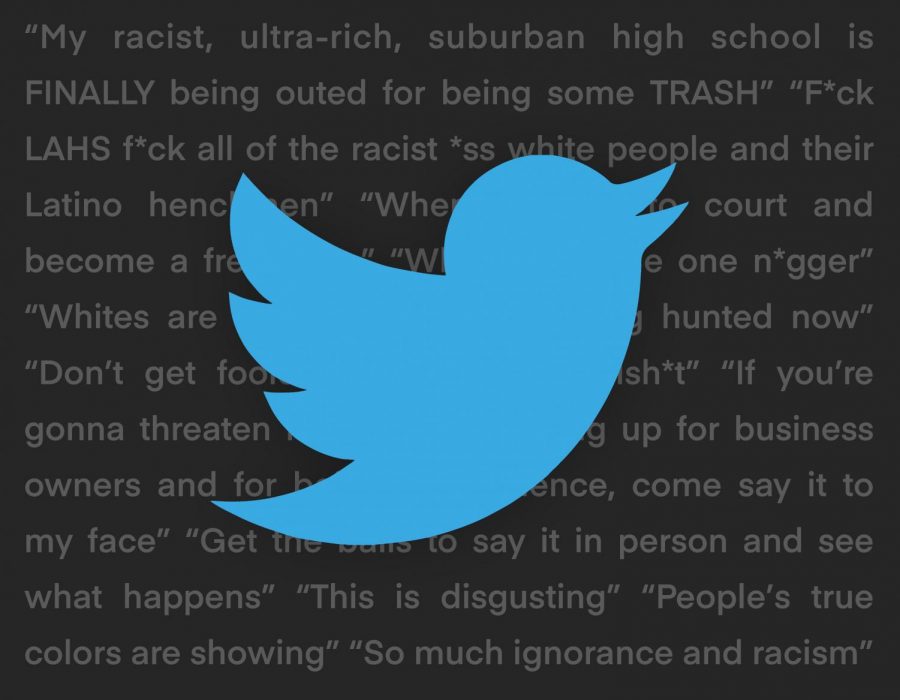 On Saturday, June 13, The Talon published a news story exploring the controversial Twitter post of an LAHS graduate by the handle @NinjaTheSy and its implications. Given that this article covers a sensitive topic and The Talon received feedback from readers, we thought it would be helpful to share our research process and our decisions.

On Monday, June 1, a LAHS graduate by the Twitter handle @NinjaTheSy posted four screenshots of LAHS students making racist comments on social media. She captioned her post, “My racist, ultra-rich, suburban high school is FINALLY being outted (sic) for being some TRASH. f*ck LAHS f*ck all of th (sic) racist *ss white people and their Latino henchmen.” In response, we published a news article originally titled, “Twitter thread sparks controversy about alleged racism at Los Altos,” with the intent of shedding light on racism at LAHS. Given that this article covers a sensitive topic and we received feedback from readers, we thought it would be helpful to share our research process and clarify the decisions we made while writing it.

We originally reached out to nine parties when doing our research: Ninja*; the four original posters included in Ninja’s tweet; those targeted in the photos; the Black Student Union (BSU); the Latino Student Union (LSU); commenters on the Twitter thread; students who circulated screenshots on Instagram; Los Altos administration; and ASB. As journalists, we wanted to remain impartial, giving all parties a chance to share their perspective on the situation.

Since we didn’t promise anonymity to the four original posters from the get-go, all of them were hesitant to talk to us. Some threatened to file lawsuits against The Talon if we published their actual names, but this ultimately wasn’t a main factor in our decision because there is no law explicitly banning the disclosure of names of minors by the press.

Admittedly, the original article lacked a substantial number of quotes from Black students and faculty. The Talon initially reached out to several BSU advisors and club members but did not receive responses before the first publication date. We also spoke with a few Black Los Altos alumni, but not all were directly quoted in the article.

We realize that we underrepresented the Black community and should have worked harder to obtain a wider range of responses. We sincerely apologize for our mistake and have updated the article to include more perspectives from Black students.

One of the most difficult decisions we struggled with throughout the writing process was whether to grant anonymity to the four posters implicated in @NinjaTheSy’s tweet. On one hand, we believed, and still believe, that these students should be held accountable for their actions.

However, it is against The Talon’s policy to publish the identities of offending minors; at the time that these comments were posted, the majority of these students were minors, with the exception of Ryan*. This policy is based upon our belief that minors should have the chance to change and reflect on their behavior, without being defined by mistakes in their youth.

Some readers expressed concern that by keeping the names anonymous, The Talon was condoning their behavior. However, we believe bringing these issues to light draws more scrutiny to these types of offensive social media posts. This kind of racist and bigoted behavior should never be tolerated and The Talon condemns their actions.

At first, we only intended to write about the Twitter post, but we later discovered that several comments on the Twitter thread mentioned a racist culture at LAHS and a disproportionate number of students of color being transferred to Alta Vista High School. Many other Twitter users also posted screenshots of current LAHS students making racist and homophobic comments, with others being circulated on Instagram. As a result, we decided to broaden the scope of our story to investigate the validity of these claims.

Although the article first describes how the tweets impacted Black students and then how LAHS  policies impact Latinx students, we didn’t purposefully divide the article into sections addressing racism toward each group individually. At first, we planned to focus on the Black community, but our research led us to related conclusions regarding Latinx discrimination that we believed were also important to include.

While writing the article, we struggled with wording because we couldn’t introduce opinions as facts and make any explicit accusations of our own. When reporting the news, our job is to shed light on the issue at hand, not instruct readers on how to think or feel about them. We consulted with a Senior Legal Counsel from the Student Press Law Center (SPLC) as well, and he similarly advised us to refrain from making any general statements about the culpability of the posters, especially deeming them as racists. For that reason, we originally chose to include the word “alleged” in our headline so that readers could form their own opinions using the facts we provided.

We now realize that this may imply to some that we are questioning the existence of racism at LAHS. With the posts presented in the article, it is clear that there is racism at LAHS. However, we initially used “alleged” upon approval from the SPLC in order to avoid making an explicit statement about any of the subjects being racist. Our decision to take “alleged” out of the headline doesn’t mean that we’re calling the students racist, but rather the posts themselves. Racism is an issue that needs to be talked about openly, and we want this article to encourage people to do just that. We have since updated our headline to read, “Twitter post sparks controversy about racism at LAHS.”

In publishing this story, our primary goal was to prompt discussion about the larger issue of racism at LAHS. We hope to continue to be part of this conversation in our community and elevate the voices of LAHS people of color as much as we possibly can.