When Los Altos joined over 3,000 schools last week in a national walkout, it took a first step. What's needed next is sustained and thoughtful effort for political advocacy. 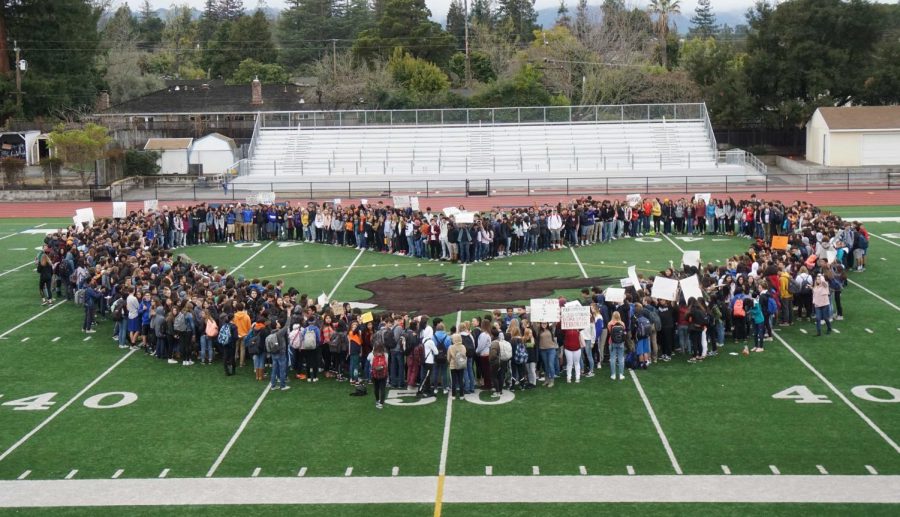 Los Altos students gather into a heart on Wednesday, March 14, as part of the national walkout for gun control legislation. Photo by Kylie Akiyama.

Los Altos has protested three times in the last two years, each time for important reasons. Yet even with a record of being outspoken and outraged, a sizable part of Los Altos stayed in class last Wednesday — not because they didn’t believe in the cause, but because they didn’t believe the impact of the protest would be large enough to sacrifice an unexcused absence.

And sure, today’s political gridlock has made change near impossible. But even though change wasn’t immediate when Los Altos joined over 3,000 schools to push for gun control legislation, that doesn’t make progress impossible. Progress is possible, it just doesn’t come in one day. Moving forward, Los Altos needs to keep the momentum. We need to ask, “What’s next?”

See our photo essay of the walkout here.

Here’s a thought: If every school walked out every Wednesday for the rest of the year, political change would happen. Part of that is already planned. Protesters hope to march on Washington DC on March 24, and another national walkout is scheduled in April. But largely, the demand for continual protest may be unreasonable.

Still, Los Altos can and should create sustained effort beyond the non-specific urge for change of a protest. To move to new avenues for progress, Los Altos needs effort that is thought-out and debated. It might not be possible to brute-force yell our way to gun control legislation, but with a specific and well-articulated idea of what we want, effort can get us there.

So for a starting point, Los Altos needs a group heading political effort for gun control. That could be a leadership group — SCL or ASB — or it could be a new club. The group’s goal needs to be focused: to keep the necessity for gun control in the conscience of Los Altos. To keep at bay the normalization of failed gun legislation and fight apathy for the injustice.

Achieving those goals is a matter of creating sustained effort to apply political pressure. Yes, Los Altos should support the planned national protests. But it can’t just be two more protests — it needs to be writing letters weekly to our representatives, or holding community discussions or anything else that innovates for new ways to create change. If ambitious enough, the effort could extend beyond Los Altos and organize schools in Silicon Valley, or schools nationwide.

A portion of that effort should go into creating a specific policy proposal. For a protest, requests for change can’t be specific — it’s hard to engineer an articulated policy into repeatable rhyming slogans. In the scope of long-term political change, however, policy proposals are a necessity. Protesters need to know the change they want to rally around, and Los Altos needs to have conversations for what that change should be.

This is difficult. It’s easy to imagine weeks of petitioning with little change. And perhaps the apathy that some students already noticed at the protest is indicative of a lack of energy. After FUSE Club started as a result of the DACA march and floundered last year, one could predict the same future for gun control efforts.

But real progress doesn’t need to be imagined. The Parkland high schoolers have already given us the momentum to envision a future that is better — their outrage has created legislative change in Florida and has pushed companies to abandon the NRA. Even without the Florida students’ ability to meet face-to-face with Congress members, Los Altos can’t be stunted by fear of failure.

This is also not to say we don’t need change with DACA, or the number of other issues that arise in the era of Trump. This idea — of taking political action past protest — can be applied to any or all of those issues.

It’s up to Los Altos whether last Wednesday’s protest represented a one-time push for gun control legislation or a first step. If Los Altos wants political progress, protest needs to be the start to something bigger.