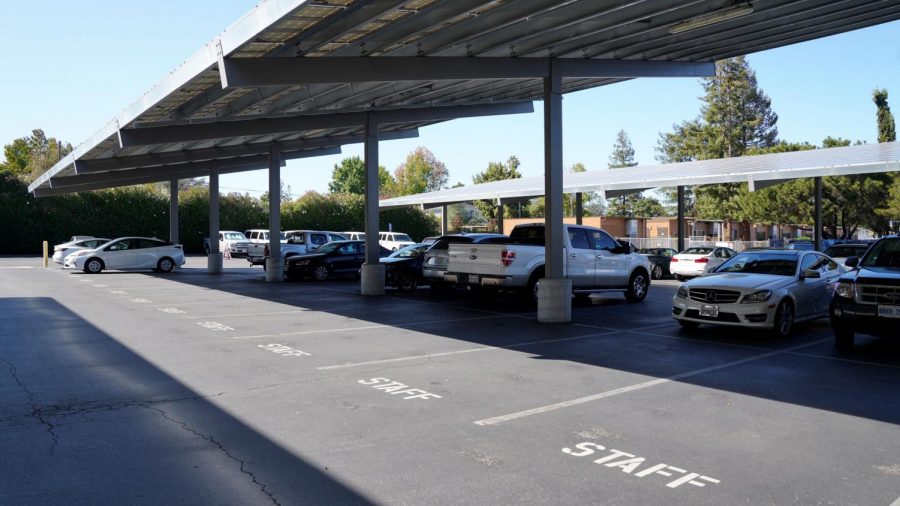 In response to the beginning of long-term construction on a new two-story classroom building, the school administration has reassigned the majority of student parking spaces to staff. This year, the number of student parking spaces in the front parking lot dropped from 200 to 94 so that faculty could be given a total of 160 spaces, including free access to all 12 electrical charging stations. This dramatic shift in parking availability for both faculty and students is due to the closure of the 600 wing and the majority of the East Driveway for necessary site-work, which in turn has caused the loss of roughly 30—soon to be 40, when the rest of the East Driveway is closed next semester—staff-designated parking spaces.

With so little student parking, the administration now relies on the stricter student parking permit policy that was introduced by ASB and Green Team last year to ensure that the distribution of permits is selective and purposeful. The allocation process has undoubtedly improved since its implementation; however, the past two months of student complaints have revealed persistent flaws in the system that simply can’t be ignored.

Under ASB and Green Team’s new policy, parking permit distribution is based on students’s commute to school rather than a typical lottery. Students are sorted into priority groups based on their seniority and home location on a bordered map: those that reside within a one-and-a-half-mile radius around the school are considered “at-large,” while those that live even further are “distance-eligible.” Seniors that fall into the latter category are the first to receive parking permits, followed by “distance-eligible” juniors, commuters in the off-campus Freestyle program, “seniors-at-large” and “juniors-at-large.” In the past, students with learner’s permits could receive parking permits as well, but as of this year, an official driver’s license was required to apply. The borders that help distinguish the “at-large” from the “distance-eligible” have also shifted to exclude a greater number of students in nearby neighborhoods who can walk or bike to school in 15 minutes or less.

Despite being more fair and reasonable than a random lottery, these criteria do nothing to address the fact that 94 student spaces just isn’t enough. This year, no one outside the top priority category was considered for a parking permit, but even then, not every “distance-eligible senior” benefitted—according to assistant principal Suzanne Woolfolk, at least 30 of these seniors were denied one. More importantly, when it came down to the final selection of students for parking permits, distance eligibility didn’t actually matter. Picking within the priority bracket was completely arbitrary, meaning those who lived a few blocks outside the designated border had an equal chance of obtaining a permit as those who lived more than five miles from it.

It’s important to clarify, however, that the problem at hand isn’t the conditions of the policy itself but rather the too-disproportionate student-staff parking space split. The number of student drivers greatly outnumbers the number of faculty, so staff shouldn’t have nearly twice the amount of parking spaces as students. What’s more, assigning every staff member to a parking spot—including part-time teachers—may not be the most efficient approach. On average, around 30 to 40 staff parking spaces are left empty as faculty come and go throughout the day; meanwhile, students without permits are relegated to the few residential streets that allow parallel parking, like Angela Drive and Los Ninos Way. Space there isn’t as limited, but it’s increasingly difficult to get to class on time due to the added distance from the main campus buildings.

Parents who drop off their students at school are also partially to blame for the perpetual parking shortage: many will loiter with their kids in student spaces in the front parking lot and public spaces along Jardin Drive, the street directly parallel to the tennis courts. Although they eventually leave when the bell rings, this prolonged “hovering” puts unnecessary stress on other students struggling to park their cars in the hectic morning traffic before first period begins.

Unfortunately, more parking spaces can’t be created out of thin air, but that’s not to say that these issues can’t be fixed with other solutions.

Students could petition the Los Altos City Council to temporarily open up more street parking around the school until next fall, when all construction that affects parking availability will finally finish. In addition, considering specific numerical distances and school commute times for each applicant when delegating parking permits can help ensure that distribution is as truly fair and equitable as we claim it to be. The process would certainly become more tedious, but the trade-off is worth it if it helps identify the students who live furthest from school and deserve parking permits the most. To ease the administration’s workload, all “distance-eligible” students could even be required to submit additional screenshots of their commute route and mileage calculated in Google Maps as part of the parking permit application. And in regards to parent “loitering,” stricter enforcement of the drop-off policy can remedy this— adult volunteers or the Los Altos police could potentially be talked into helping student conduct liaisons Julie Corzine and Seth Tasman supervise parking around the school.

This new two-story classroom building is only the beginning of a series of campus renovations that are bound to further disrupt daily school life; as such, it’s crucial that we continue to refine our approach to student and staff parking in accordance with ever-changing conditions. That being said, however, this system doesn’t deserve to be labeled a complete “failure” just because of a few setbacks. The current parking permit policy already shows undeniable potential, and with improvement, it can certainly grow into a more fool-proof system.