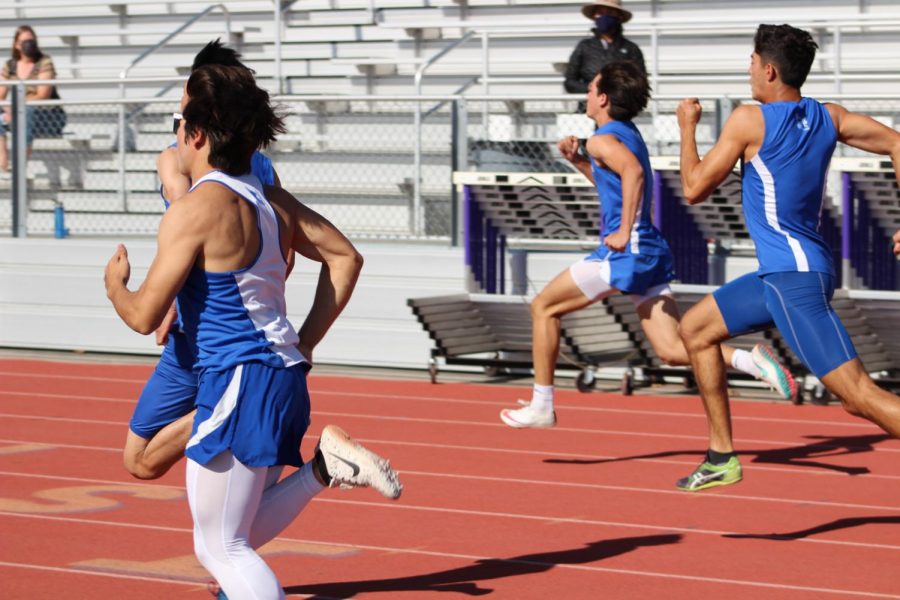 Under the scorching heat and a clear blue sky, the Los Altos High School and Monta Vista High School track teams met at Monta Vista on Saturday, May 8 to participate in an unconventional, but exciting, track meet. This meet consisted of a series of relays — including a girls and boys 4×1600-meter, 4×800-meter, sprint medley relay (SMR) and a co-ed 4×200-meter — and a boys and girls pentathlon. The pentathlon consisted of a 100-meter race, shot put, long jump, high jump and a 400-meter race.

The winner of the pentathlon was decided by an accumulation of points over the five individual events. The pentathletes started their competition at 9 a.m. with a close 100-meter race then moved onto shot-put and long jump, competed in a high-jump event and ended with a 400-meter relay. The Eagles won both pentathlon competitions, with sophomore jumper Megan MacKenzie winning the girls competition and senior hurdler Jimmy Dessouki winning the boys competition.

While some athletes did come to the meet with the intent to win, the atmosphere surrounding the entire meet was positive and full of laughter, with athletes cheering on everyone, not just their own team.

“This whole event was really just for fun,” head coach Stephanie MacKenzie said. “We just wanted to give the athletes an opportunity where they could participate in an invitational-like meet, but also just have fun trying new events.”

A typical season would have invitational meets on weekends, with events like the sprint medley relay. However, because of quantity limitations due to COVID-19 guidelines, that wasn’t an option this year.

“I’m just really proud,” Megan said. “In my last event of the day, the 400-meter race, I broke a minute and got a personal record and that was one of my goals coming into this meet. I was able to push it out in the last few seconds, and I’m just really happy with that.”

According to MacKenzie, the athletes competing in the pentathlon had to learn many new skills in a short period of time, working with new coaches and other athletes. Many consistent jumpers who were participating in the pentathlon, for example, had to work with the sprinting and shot-put coaches to learn the necessary skills, and vice versa. While athletes did have to adapt to new situations during this past meet, they were able to continue to enjoy themselves nonetheless.

“I’ve actually had a personal record in all three of my events that I’ve had so far, including the 100-meter sprint, shot put and long jump,” Jimmy said after the third event. “That’s because I’ve never participated in any of these events before, but that’s kind of the beauty of it, too. You can’t be too hard on yourself and you have to just let yourself enjoy the race.”

MacKenzie also talked about how this meet was a chance for some of the more well-rounded athletes to participate in events that they might see in the future, as events like the pentathlon are more common in collegiate track and field. MacKenzie hopes that by giving the team this opportunity, the athletes are opened up to further possibilities for what they might want to pursue beyond high school.

While unconventional, the meet was far from unsuccessful. It was a chance for athletes to try new events in a low-pressure environment, while also building their confidence as the team heads into their last few weeks of the season.

“I just feel accomplished right now and I had a lot of fun today,” senior jumper Maura Kelleher said. “It’s my senior year, so I’m just excited to be out here and I’m looking forward to the rest of the season and just trying new things.”