Eagles Win Big in First Round of CCS Tournament 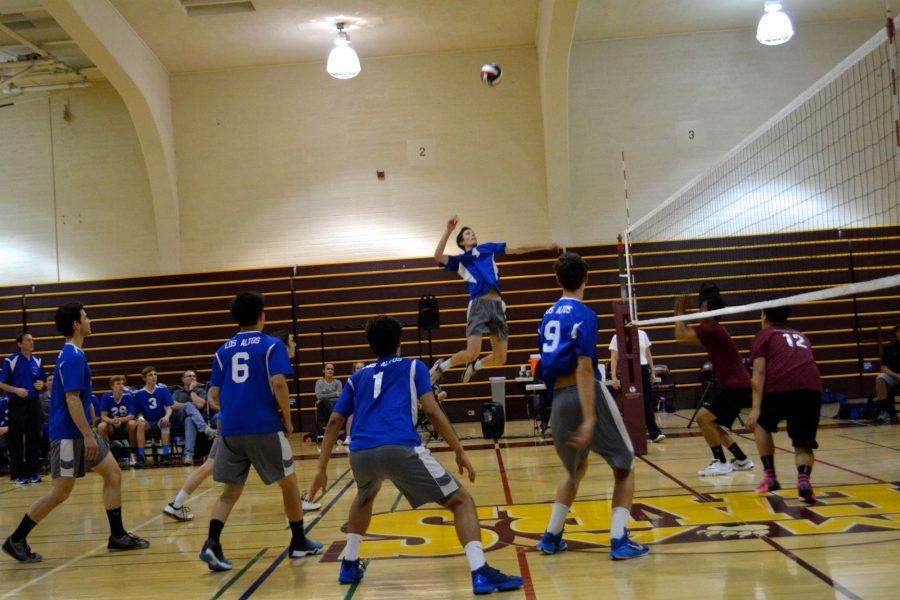 With the game on the line on more than one occasion, seventh seed Eagles came up clutch with crucial spikes and game-saving blocks to dominate tenth seed Menlo-Atherton in the first round of CCS. On Tuesday, May 10, 2016, the Los Altos boys volleyball team advanced to the second round of CCS by beating Menlo-Atherton 3-1.

“Our first priority this game was passing, because we have been struggling with that and when we have the passing going well, our offense clicks,” senior team captain Nathan Smith said. “In the beginning we struggled a little bit, but by the end, we gained our focus and we were there.”

Menlo-Atherton dominated the first set of the game with a 5-11 run. Toward the end of the set, the Eagles managed to narrow the gap to 18-22 with key plays by senior David Stein. However, Los Altos gained their momentum too late in the set and eventually lost 19-25.

“The first set we started off shaky [but] we ended the set really well,” Nathan said. “We tried not to overthink it too much and just go in playing like we knew how to play… That gave us a lot of success, by not worrying too much on how we played.

The second set started off much differently than the first. The Eagles took a marginal lead early on, and the team began to click once again. Later in the set, sophomore Attila Delingat, Nathan Smith, and freshman Nicholas Fache contributed to Los Altos’ lead with crucial saves. With the game close at 19-17, the Eagles went on a 6-3 run to win 25-20, including the set-winning spike by David Stein.

With the game tied at 1-1, the Eagles focused on their fundamental passing game and began the third set similarly to the second. They took a commanding lead midway through the set leading 16-10 at one point, but a series of miscues gave Menlo-Atherton five points in a row to keep the game close at 16-15. Lead by the seniors, the Eagles stormed back and took the third set 25-21 after a powerful spike by senior Nathan Larson put the set away.

Going into the fourth set, the Eagles led 2-1 in sets, and closing the game was the only thing on their mind.

“There was a little bit of pressure, but you [need] to trust your teammates and play your game,” Nathan said.

The set featured extraordinary saves and last-ditch efforts by both teams to keep their CCS hopes alive. Tied at 19-19, Nathan Larson came up clutch with a crucial spike to give Los Altos the lead late in the fourth set. With the crowd on their feet, senior and co-captain Harrison Beck laid down the hammer with a beautifully placed spike to increase the Eagles’ lead to 21-19. Nathan Smith, as he has done all season long, put the finishing touches to yet another wonderful performance by the Eagles and won them the set, 25-20.

[We] are playing at Monta Vista this Thursday, and hopefully we can go out there and improve our passing game and do what we can,” Nathan said.

In the CCS quarterfinals, Los Altos will play against second seed Monta Vista at Monta Vista High School at 7:00 pm on Thursday, May 12.