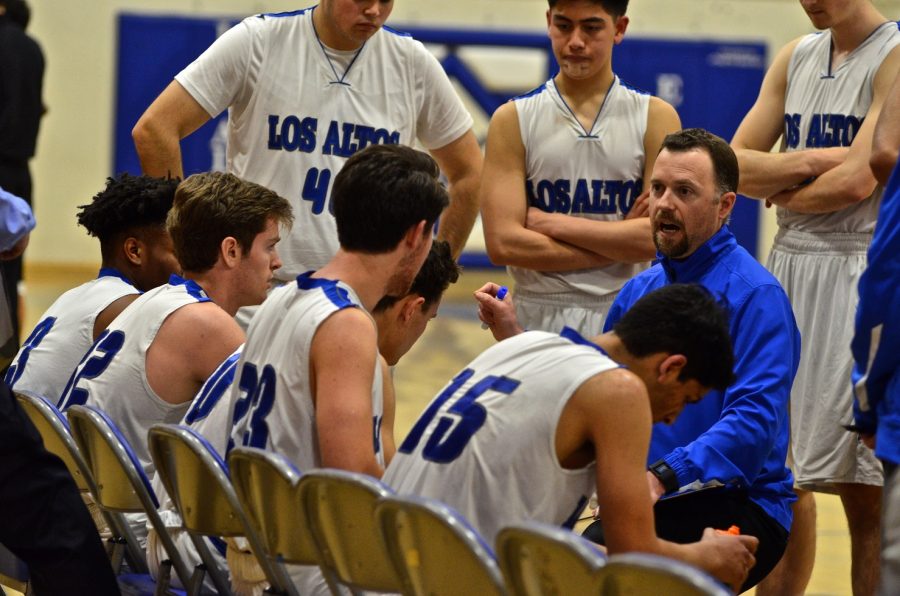 By Akhil Jakatdar and Kunal Pandit

Yesterday, Tuesday, February 14, the varsity boys basketball team won on senior night, beating the Gunn Titans by a score of 54-43.

After the seniors were honored, the game began with Los Altos jumping out to a quick 9-4 lead. Coming out of a timeout, the Titans were able to string together a few baskets and ended the quarter down only three points. But missed layups and poor rebounding on the Titans’ part continued to help the Eagles build their lead throughout the game.

The story of the second quarter was the play of senior center Luke Enthoven. Luke managed to have big plays on both ends with crucial rebounds and layups on one end and blocking shots on the other. Los Altos was able to capitalize in the paint as all but one of their baskets came on the inside. After a strong team defensive effort in the quarter, Los Altos was able to limit Gunn to just eight points and pulled ahead by 13 as the half ended, with the score at 29-16.

The third quarter started with back to back buckets by the Eagles: a layup from Luke followed by a three-pointer by junior Matt Eberle. After Gunn fought back with a couple of threes, senior Tommy Andrews killed their momentum with a coast-to-coast fast break layup to give Los Altos a 44-29 lead.

“I just saw the ball and picked it up with the mindset to be aggressive going to the basket,” Tommy said.

This aggressive mindset carried over to the fourth and final quarter, as senior Ahmad Washington pulled up and drained his fourth 3 of the game to give the Eagles a 21 point lead. Despite a late game push by Gunn to bring the game within 11 points, the Eagle lead proved to be too much for the Titans to overcome and they would eventually fall 54-43.

A season-ending win brought the Eagles to an even 12-12 record and a CCS berth. After the game, senior Jay Uppuluri talked about the outcome of this game and what it means for the team going forward.

“We played really well from the start, which is something we haven’t been able to do in our previous games,” Jay said. “And most importantly we finished the game strong and set a good tone going into CCS.”

You can catch the varsity boys basketball team on the court next Tuesday, February 21, where they will play their first CCS game.