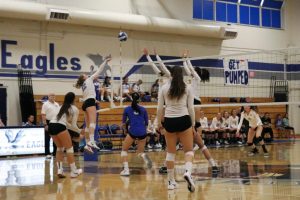 Last Thursday, the Varsity girls volleyball team played Mountain View during their first league game of their season. Los Altos came into the match with a 5-3 overall record while Mountain View stood at 4-0. Mountain View kept the pressure on Los Altos throughout the night, winning the match 1-3.

To begin the second set, Los Altos scored some early points, putting themselves in the lead. Mountain View was able to tie the score, but then made mistakes off serves that allowed Los Altos to pull away and win the second set by a margin of 25-19.

Mountain View took an early lead in the fourth set as well. Los Altos rallied well and came  within one or two points of Mountain View—and even tied the set at one point—but was unable to take the lead. Mountain View won the final set 25-21 to win the game.

“Next time on the court we’re just [going to] focus more on the basics of volleyball rather than trying to run… fancy plays,” senior Camille Blanc said.