Donut Derelicts Feature: One Man’s Quest for the Perfect Car 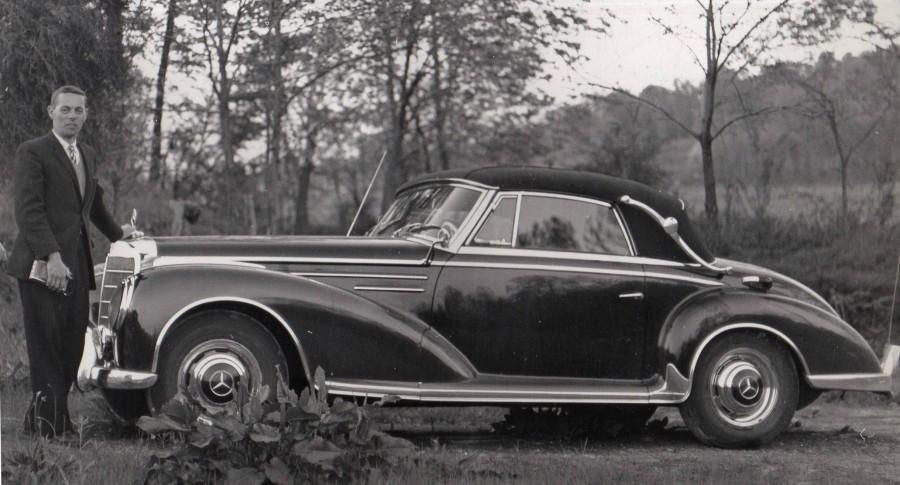 Upon the arrival of his Mercedes Cabriolet from Long Island City in 1960, Donut Derelicts member Kent Emigh took a photo to commemorate the moment. Kent spent several years searching for this car, which is one of only 47 ever produced. Courtesy of Kent Emigh.

The Talon’s first-ever magazine issue, published on Tuesday, March 31, features a group of local car lovers known as the Donut Derelicts who meet every Saturday morning at the Main Street Cafe. They bring their antiquated cars—anything from a red 1933 Pierce Arrow to a 1924 Model T Coupe—and happily show them off to curious locals. Below is an exclusive feature of Donut Derelict member Kent Emigh, who spent years searching for his dream car.

In 1952, Kent Emigh, now 86, and his good friend started the first auto agency in Indiana, importing some of the first European cars to come to America following World War II. And then, after a lifetime of traveling and working in the car business, Kent decided he finally wanted a valuable car he didn’t have to ship back home and sell to someone else. The one he wanted was a Mercedes Cabriolet—the rarest of all post-war Mercedes Benz with a grand total of only 47 ever built. He tells me that number twice just to make sure I catch it on tape. He’s very proud of the fact that he was able to find the car, but it wasn’t easy.

The trip in May 1957 consisted mostly of factory visits and sightseeing. He was in Rome on Easter Sunday and describes the piazza packed with thousands of visitors, flowers everywhere on all the monuments, motor scooters clogging the streets and the Pope blessing people at the Vatican. It was inspirational, he says.

But other than his newly acquired memories, he left to return home empty-handed.

Kent returned to Europe again in 1958, which is the year he visited the World Exposition in Brussels, Belgium. On the way home from this trip, Kent boarded the first commercial Boeing 707 jet airliner. He recalls waiting in an airport in London for his Pan Am flight to Paris, where he would catch another plane home. The plane was delayed because of bad weather over the North Sea and Kent had to wait for a few hours before it was all clear to fly.

“Waiting in the same lobby were Danny Kaye and Frank Sinatra,” Kent says. “And finally [the storm passed]  late that evening. That’s when they held the [flight]—the first jet crossing [over the Atlantic]. And that was very enjoyable and it was quite an honor to be a part of that … That was the beginning of the jet age.”

A few months later, Kent picked up a copy of the New York Times and read a description in the classifieds of an antique car that exactly matched the Mercedes Cabriolet he was looking for. He took the first flight from Indianapolis, Indiana to Long Island City, New York to pick it up.

“So that’s how I ended up with the car that’s meant a lot to me,” Kent concludes.

He brings it to the Main Street Cafe almost every Saturday and is always more than happy to hang around outside and tell you all about it, from the special olive green carpeting to the fitted leather luggage and ladies’ hat boxes in the trunk. And, if given the chance, he’ll tell you even more, starting with his childhood on a farm in Indiana.