Do Students Have the Right to Protest? Why? 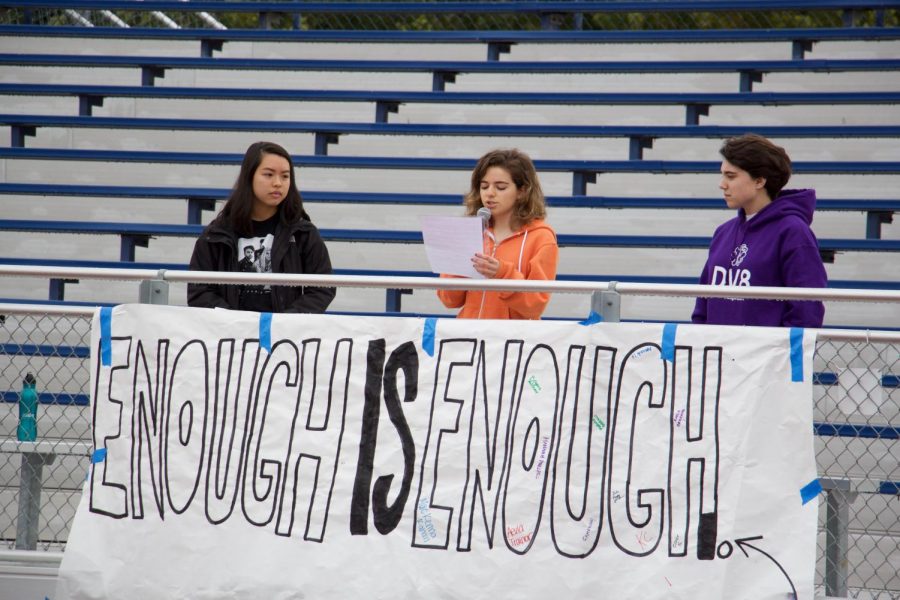 Organizer junior Brynna Mitchner (center) urges students to call on Congress to take action on gun control in the wake of Parkland. Students who walked out last Wednesday were given unexcused absences, but Los Altos could've issued harsher consequences on the basis of the walkout disrupting school activities. Katrina Arsky.

Students who walked out last Wednesday received an unexcused absence during their second period. But if the protest’s organizers hadn’t notified the administration beforehand, the consequences could’ve been more severe and led to suspensions, Assistant Principal Galen Rosenberg said.

“You’re not supposed to disrupt a public school, and schools have the opportunity to manage and deal with students if they are disrupting the public school,” Carlson said. “There are consequences [to protesting], but you can’t be punished extra beyond what the normal consequence is for cutting class.”

The origin of schools being given such discretion over free speech came from the 1968 Supreme Court case Tinker v. Des Moines, where the court ruled that students do not shed their First Amendment rights at school unless a school can determine that their speech will “materially and substantially interfere” with daily school operations.

Twenty years later in 1988, the Supreme Court expanded schools’ ability to restrict student speech in Hazelwood v. Kuhlmeier, where they explicitly stated that schools have the right to restrict certain forms of free speech that are “reasonably related to legitimate pedagogical concerns.” This means that schools can regulate school newspapers and speech on campus so long as they believe the speech will harm their academic objectives.

But in California, Education Code 48907 counters Hazelwood by protecting “the right to exercise freedom of speech and of the press.” However, expression can be prohibited if it “incites pupils as to create a clear and present danger of… substantial disruption of the orderly operation of the school.”

Los Altos runs today as a public school governed by these laws, and the walkout last Wednesday embodies how fundamental First Amendment rights interact with how schools can censor student speech. Without clear definitions and only references for what constitutes constitutionally protected speech, some students appreciate the support administration has provided for free expression.

“The protest demonstrates the administration’s understanding of the student body’s opinions and what they want to advocate for,” next year’s ASB President junior Tori Hausch said. “That’s a great way to indirectly support students expressing their opinions.”

But some students expressed concerns over the fact that administration and teachers were so open in supporting the protest last Wednesday that they were stepping into political territory.

“I would call this school-endorsed speech because teachers are actually helping organize, shifting the crowd and leading stuff,” junior Ben Rubin said. “It would have been more appropriate for the school to say, ‘We’ve heard of the walkout but our attendance policy will be the same as always and students can make their own choices.’ It’s not a great example of the school giving First Amendment rights to its students by prioritizing one speech over another.”