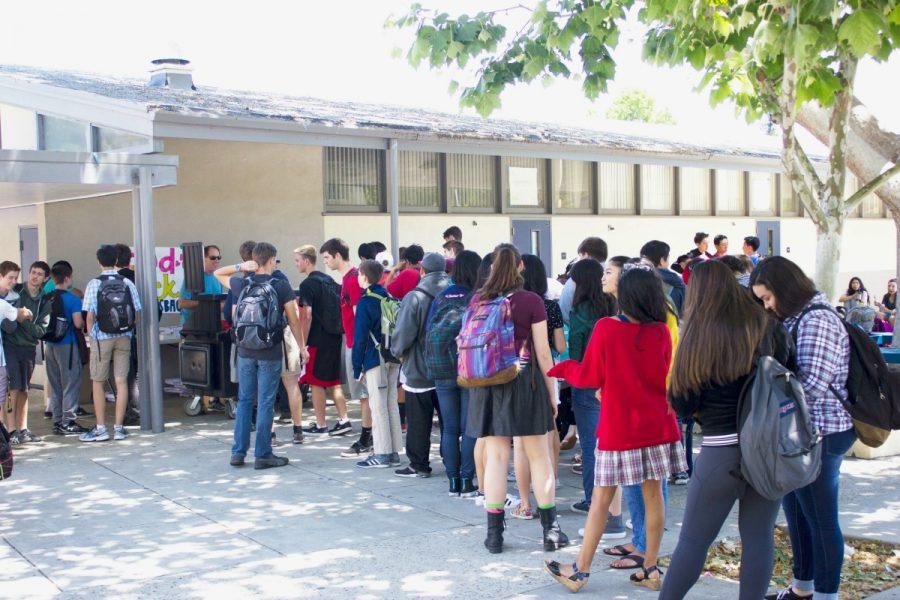 By Sofia Guo and Katherine Yen

For more than a decade, on-campus food options for students have consisted of the PTSA-run pizza cart and the school cafeteria. With the school’s growing population, the cafeteria — which was last renovated in 2002 to serve about 1200 students — is limiting access to food options on campus.

“I know that [everybody] recognizes… that the cafeteria kitchen and the facility for students to get food is not designed for the population we have,” Assistant Principal Galen Rosenberg said.

The school and PTSA are currently looking into solutions to improve student access to on-campus lunch options. In particular, the PTSA believes that it can reduce the crowding in the cafeteria if the school adds a cold foods cart on campus. The cart would offer the surplus sandwiches and salads from the cafeteria in the quad.

“I’d love to see another cart operating,” PTSA pizza cart coordinator Rachel Botsford said. “You can’t take away the pizza or the snacks, but you can move the salads and sandwiches that are already available inside the cafeteria to a [more accessible place]. ”

The district echoes the PTSA’s sentiments and is considering adding another food cart to the campus. Though details remain up in the air, Associate Superintendent Mike Mathiesen believes it likely that there will be a cold food cart on campus next school year.

“It’s not as simple as it might sound,” Mathiesen said. “It’s a matter of [whether] we have staffing, how much does additional staffing cost, how much money would we generate off of the mobile station, [but] I’d say it’s pretty likely.”

The addition of the cart would potentially reduce lines in the cafeteria and draw more students to the cafeteria previously deterred by wait. Students who currently buy lunch from the cafeteria voice frustration overthe longer lines.

“I usually get a salad from the cafeteria because I can’t go out,” junior Natalie Muningua said. “It’s healthier and less processed [than other food options], but some days I don’t get lunch because the cafeteria’s too crowded or the food looks nasty.”

The current food offerings of the school cafeteria and PTSA comply with the federal and state mandates that restrict the types of high fat, sugar and sodium foods that are sold to students on campus.

As part of the National School Lunch Program, which offers grants for free or reduced lunch for lower income students, the cafeteria is required to serve whole grain foods, fruits and vegetables and two choices of milk every day and a certain amount of servings every week.

“We have the luxury of going beyond the basics [of improving the school, and] this is certainly something people would think is worth looking at,” Rosenberg said. “But I haven’t heard it’s that high a priority.”