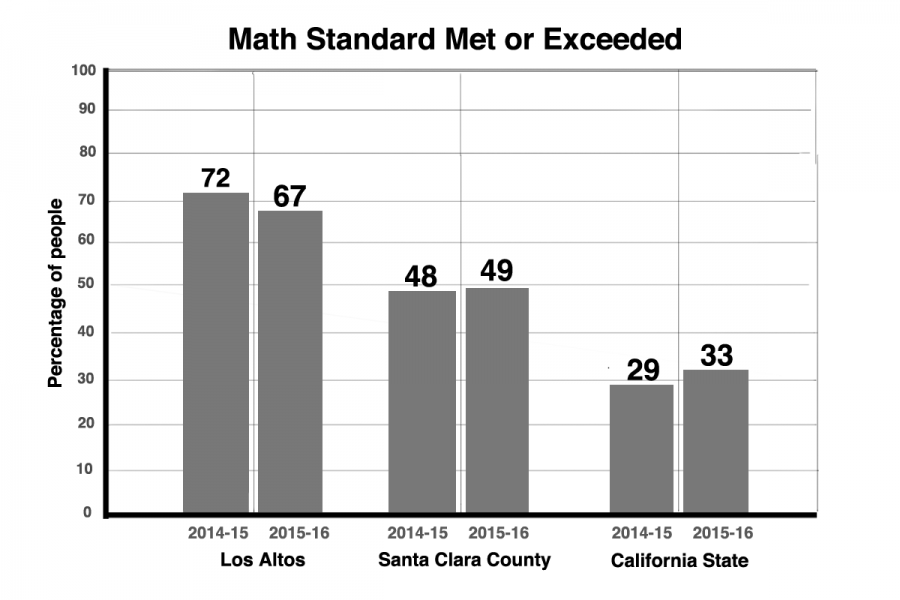 By Yolanda Spura and Justin Yu

Much to the district’s surprise, Los Altos’ overall performance declined on last year’s Smarter Balance Assessment Consortium (SBAC) test: the proportion of students who met or passed state standards dropped from 81 to 70 percent and 76 to 67 percent in English Language Arts (ELA) and math, respectively. Teachers and administrators are currently discussing the scores and potential causes for the decrease in performance.

“We were completely surprised by the results,” Associate Superintendent Brigitte Sarraf said. “We had anticipated an improvement in every category and every student group… Our students continue to perform as well as they always have on all [academic success] indicators except the SBAC.”

Historically, Los Altos has scored higher on standardized tests compared to statewide averages. While the SBAC is no exception, the district is trying to make sense of this year’s lower scores. In the following weeks, administrators and teachers will analyze the scores of individual demographics in greater detail.

According to Instructional Support Team (IST) coordinator Joy Hellman, Sarraf and Educational Services will compile data on the results, while IST will interpret this data and create a list of questions to ask teachers and students in a meeting on October 10.

While neither the administration nor district have found a clear answer as to why this year’s scores were lower, potential factors include technical difficulties, language barriers, unprepared students, last year’s new testing schedule and students not taking the test seriously.

“It’s all speculative at this point; what possibly could have caused these results?” Sarraf said. “My aim is to gather as much information through conversations with students, teachers, administrators and perhaps [to] some extent even parents to see what people think might be behind this.”

Another potential cause for the drop in scores may be the increase of participation rates this year — Los Altos administered the test to 93 percent of students compared to 87.5 percent last year. While neighboring schools like Gunn and Paly scored higher than Los Altos, these schools also had lower participation rates — 45.6 percent and 23 percent, respectively.

“It is not appropriate for us to compare data with schools with different participation rates because Los Altos had a larger pool of students tested,” Hellman said.

This year, the school administered the test to many of the AP students who opted out before, which made the decline in performance more confusing for Sarraf.

“A very large percentage of the students who opted out last year were our AP students,” Sarraf said. “That fact alone led us to believe that if we get these kids to take this test and take it seriously, by that factor alone, our scores should have gone up.”

On October 24, the district will conduct a study session on further analysis of the scores and possibly begin to draft an action plan.

Over the course of the next two months, the district plans to have data discussions with departments, course teams and the Leadership team for more in-depth analysis.

“There’s a long, long list of possible reasons, and we don’t know which one is responsible,” Sarraf said. “Once we do know, we will put an action plan in place for next year. We have a lot of work to do between now and then.”