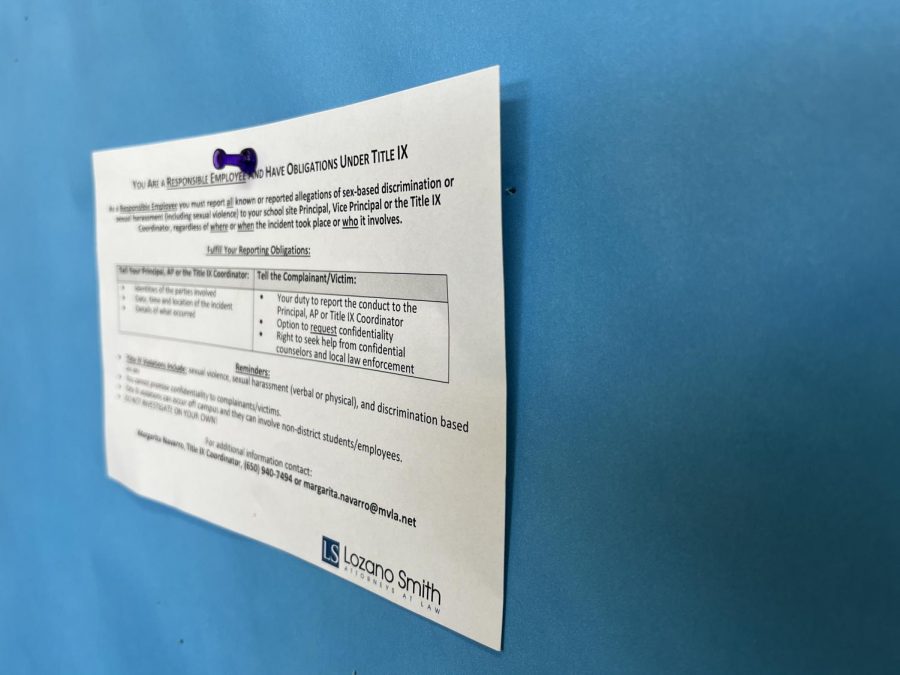 The revisions follow the U.S. Department of Education’s decision on Wednesday, May 20 of last year to include sexual harassment under Title IX, a law prohibiting sex-based discrimination in federally funded schools.

“This batch of updates is mandatory and the language isn’t developed by us locally,” Board of Trustees President Fiona Walter said. “For this reason, public input wasn’t part of the process. We presented them publicly at our previous meeting before approving them to give the community or others that might be interested plenty of time to review them.”

Sexual harassment must take place in an educational program or activity to be reported to the District; off-campus incidents may be considered if the District decides that they generate a “hostile school environment” for the affected parties. Following the update, the respondent must also be attending an MVLA school.

The new policy defines discrimination based on pregnancy or related medical conditions as reportable sexual harassment, along with discrimination based on sex, gender, gender identity, gender expression or sexual orientation. Stalking, domestic violence and dating violence are other new additions to the reportable sexual harassment examples defined by District policy.
Existing support systems for victims — which include free counseling, modifying work or class schedules, campus escort services and mutually restricting contact between the affected parties — will not be affected. Faught says that the new policy will contribute to a more “formal investigation” as each role has to be performed by a different individual, involving more District staff in the process.

To account for their greater participation in the reporting procedure, all staff will be required to complete a training program reviewing what constitutes sexual harassment, procedures for reporting or filing complaints, how to manage an unofficial complaint and how to avoid biased investigation.

After students and parents or guardians submit an unofficial verbal report, they may file a formal complaint with the Title IX Coordinator so the allegation can be addressed through official procedures. If the victims’ safety is threatened, the Title IX Coordinator can file a formal complaint at their own discretion even if the victim decides not to, although the victim will be given notice if this occurs.

Within 10 business days, the District will contact compliance officers associated with the Police Department to provide a fair investigation; the results of the investigation will inform the District’s written decision, released within 60 business days from the complaint being received. It will also help the District decide whether disciplinary sanctions such as suspension are appropriate.

“I don’t anticipate any changes to reporting or awareness as a result [of these revisions],” Walter said.

Posters displaying the Title IX Coordinator’s contact information at (925) 788-3038 and [email protected], the procedures for reporting sexual harassment, the rights of the involved parties and the responsibilities of the school will be posted in all on-campus bathrooms and locker rooms in order to keep students informed of their options.