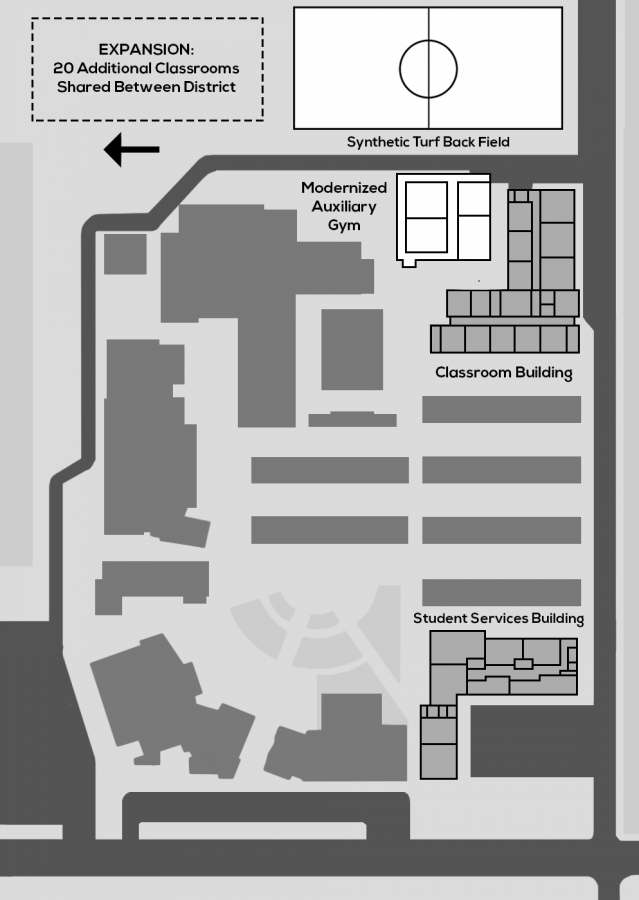 The latest version of the Facilities Master Plan includes more developed athletic facilities and auxiliary funds for 20 additional classrooms within the district to accommodate for future student growth. Carissa Lee.

The revised master plan, presented by Superintendent Jeff Harding and Associate Superintendent of Business Services Mike Mathiesen, aims to address parent concerns about athletic facilities presented at the previous board meeting and give the district flexibility to accommodate students beyond the peak of current estimates of enrollment. The board pushed its final decision on the plan to Monday, January 8, 2018 and is looking into moving the two-story classroom building away from the perimeter of campus due to nearby resident concerns, and all members of the board voiced their unofficial support of the added elements of the plan.

“I think we’ve fine-tuned a lot,” new board president Fiona Walter said. “The $292 [million budget] is a good solution on so many fronts. I’m willing to talk about the two-story building moving and what that means or what that looks like, but otherwise I think this is it.”

The previous draft of the Los Altos part of the plan had three main components: a two-story classroom building to replace the 600 wing and nearby portables, a two-story Student Union and administration building to replace the two administrative office buildings, and expansions of the small gym and library and small improvements to the cafeteria and the school entrance.

The MVLA School Board’s demographic study projects there will be 4,576 students enrolled in the district by the 2021-2022 school year. The 20 classrooms will add to the 29 classrooms already proposed in the draft of the plan, which already contained six more classrooms than what was projected as necessary, but these demographic studies are subject to change based on nearby housing projects.

Due to public demand, the new draft also includes updated athletic facilities. A modernization of the small gym and installation of one synthetic soccer field at the back field address parent concerns that arose at the board meeting on Monday, November 20 about Los Altos’ athletic facilities compared to other high schools’. The synthetic soccer field would prevent sharing fields and allow practices and games to be less affected by rain than the regular field.

The median cost between the high and low estimates of the plan is $292 million dollars. Both $198 million and $268 million plans were previously presented, but this plan ensures quality buildings will be built while still being frugal. All members of the board voiced their unofficial support for the new budget at the board meeting last week, with some willing to go even higher.

The majority of public comments surrounded the two-story building slated for the perimeter of Los Altos’ property. Residents of Alicia Way were concerned about the building overshadowing their houses and rendering any solar panels they had useless at points during the day. After talking to Mathiesen, many proposed pushing the building into the center of campus.

At the Monday meeting, the board said that they plan to look into the costs and benefits of this new location, and Mathiesen said this process has already begun. It would, however, cause empty space because the aging portable classrooms would eventually be demolished with no plan for what to replace them with. Citizens believe parking is a bigger issue than the board currently believes and think this empty space could be filled with parking spaces.

The board is considering adding another meeting before they vote on the final draft of the plan on Monday, January 8, 2018, but they are uncertain they will need it.